Nancy Meyers’ The Intern is both about an intern and an intern in itself. Mainstream comedies often feature a young, driven individual whose commitment to his/her career affects his/her romantic or family relationships, but the sage advice of a smart minor character helps the protagonist see things more clearly and re-establish their priorities. That sub-plot serves as an intern under the management of the main narrative in such films as “The Devil Wears Prada,” “Jerry Maguire,” “Friends With Benefits” and Meyers’ own “The Holiday,” but The Intern turns this sub-plot into the primary narrative and finds more than enough material to deliver a genuinely warm and engaging film.

The added twist, of course, is that the smart adviser in this case is a retired seventy year-old widower who spent forty years in the phone book industry, but answers an ad for a senior citizen internship at an Internet shopping company. Already, this is far more detail than is normally given to the stereotype of the smart supporting character, as Ben Whittaker (Robert De Niro, “Silver Linings Playbook”) begins the film with a voiceover about what he has done and how he now tries to fill his time. This narration forms a video application for About The Fit, run by super confident and successful go-getter Jules Ostin (Anne Hathaway, “Interstellar”). Upon his arrival, Ben quickly makes himself useful despite his ignorance of the digital age. In pretty much the only similarity between this fine, funny and adorable comedy to the dismal “Terminator Genisys,” Ben proves that being old does not make him obsolete.

What Ben’s age does allow for is plenty of fish out of water comedy, especially as the young employees of About The Fit frequently turn to Ben for his experienced view, whether it be about getting yourself noticed at work, how to talk to the opposite sex or what the best apartment to rent might be. But while ATF staff Jason (Adam DeVine, “Pitch Perfect 2”), Becky (Christina Scherer), Davis (Zack Pearlman, “The Virginity Hit”) and Lewis (Jason Orley) seek Ben’s advice in these matters, Jules remains largely separate, confident and controlled in her role, and initially hesitant about Ben. But as the film progresses, she gradually warms to and learns from him as well.

Feminist hackles may rise at this apparent intrusion of patriarchy into what is ostensibly a progressive image of contemporary womanhood. However, Jules is far from a stereotypical career woman, as rather than being a brash, ballbusting bitch, Meyers along with the constantly watchable Hathaway create a rounded, plausible and likable character, driven but sympathetic, and while she may be devoted to her company, Jules is also a loving if somewhat harried mother and wife. Crucially, Jules’ commitment to her work is not framed as a failure of her as a mother, as it could so easily have been. Instead, The Intern dares to suggest that a woman can have it all, and that while there is a price, that price is not some crucial part of her identity but the stress and exhaustion familiar to many in today’s super fast professional spheres. The film achieves its portrayal of womanhood by making Jules’ development the main arc of the narrative, while Ben largely stays static. Along the way he learns about Facebook and develops a romance with masseuse Fiona (Rene Russo, “Nightcrawler”), but these are sub-plots rather than the central narrative. The film could so easily have focused on aged romance and sexuality, but by keeping the central relationship one of friendship between Ben and Jules, The Intern is startlingly refreshing.

Not that it is without flaws. While Jules is well rounded, other female characters in the film are more problematic. Fiona is charming and it is pleasing to see a woman of Russo’s age getting roles, but she is largely a cipher and her presence in the film relates entirely to Ben still having some form of sexuality. Worse are two minor characters — women of Ben’s age that are solely comedic caricatures. One is a horny old crone that Ben wants to avoid; the other a dotty old dear who seems perpetually confused. While the appearances of these characters are brief, they are still as irritating as everyone else is pleasantly distinct and non-extreme. In addition there is a comedy heist set piece that may highlight once again that Ben is cool under pressure while his young colleagues panic, but is unnecessarily silly and strays too far into farcical territory.

Such niggles are largely forgotten, however, in the film’s central highlight. Meyers has delivered many winning, warm and witty romantic comedies over the years, including “The Holiday,” “It’s Complicated” and “Something’s Gotta Give.” One of her key talents is affecting dialogue scenes, and The Intern features several of these between various characters. The highlight of the film is one such sequence: An extraordinary long discussion scene between Ben and Jules that highlights their similarities and differences, and crucially the resonances between them. Gender relations are smartly interwoven with personal issues and, while Ben is wise, the scene does not suggest that Jules simply accept what he advises. Indeed, he often acts more as a sounding board for what Jules needs to get off her chest, once again the film taking the viewer through Jules’ development, often placing us in Ben’s position. While Ben and Jules are very different people, they form a remarkable connection that is neither creepy nor cloying, but genuine, affecting and affectionate. Indeed, their relationship is rather like the film as a whole: Warm, pleasing and ultimately adorable. 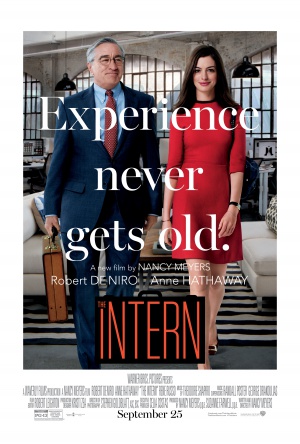