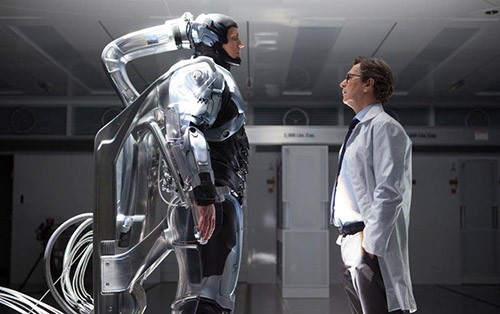 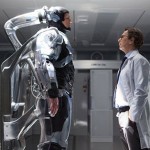 Part good. Part bad. All modern. RoboCop, everyone’s favorite cinematic cyborg do-gooder, returns to the big screen after a 21-year absence, now in a shiny, sanitized package that smartly brings the character into our post-9/11 reality only to malfunction halfway through by blandly defanging the franchise’s satirical bite. The opening chunk of José Padilha’s 2014 RoboCop remake is surprisingly sharp, with right-wing TV personality Pat Novak (Samuel L. Jackson, putting his natural charisma to good work) preaching about the wonders of American militarized robots that are keeping streets around the world safe from violent dangers. A live news feed takes us to one of those streets, in Tehran, to be exact, where things soon go south for both the Iranian citizens and the robot forces.

This beginning immediately situates us in a current climate and quickly references everything from the American occupation of a Middle Eastern nation to the shady biases of certain news media outlets. It immediately feels more watered down than anything Paul Verhoeven’s original would have dabbled in, but the effort to modernize the concept with real-world issues is an admirable one. Novak explains to us in his bombastic, sensationalist manner that Americans have unwisely rejected proposals to add these militarized machines to their own streets and there’s even a bill out there preventing non-human law enforcement from setting foot on U.S. soil. Of course, if the business minds at robot-designing OmniCorp have anything to say about it, the tide will soon be turning.

The groundwork having been laid, it’s time to introduce us to ill-fated Detroit cop Alex Murphy (Joel Kinnaman, taking over from Peter Weller), whose keen investigation of dirty dealings in the force is already getting him in some trouble. Anyone remotely familiar with Verhoeven’s “RoboCop” will know where this is all headed and even those that somehow missed out on that highlight of 80s action filmmaking shouldn’t have any difficulty figuring it out, but as is befitting the drop from the original’s R rating to this version’s PG-13 classification, Murphy’s arc is met with considerably less grisliness this time around.

He still ends up in need of a transformation, though, and it couldn’t come at a better time for OmniCorp CEO Raymond Sellars (Michael Keaton, fun as always), who has been seeking the perfect candidate for a man/machine hybrid that could very well be the key to getting OmniCorp products on American streets. The birth of RoboCop is clearly of interest to Padilha, who takes his time with this portion of the narrative, introducing us to Dr. Dennett Norton (Gary Oldman), a good-natured guy responsible for Murphy’s tech-heavy new body, and letting the gravity of the situation settle on our hero’s shoulders in a series of scenes that focus on the overwhelming change he must now adapt to.

Kinnaman isn’t particularly adept at selling the emotion here, but he has a likable presence nonetheless. The problems with this incarnation of Murphy are more related to concept and design than human performance. Fittingly then, the seeds of the movie’s overall problems are first planted here. This Murphy is too human in too dull and dramatically bland a manner. He only has to wear his helmet with the famous band of red light where his eyes should be when he’s in combat mode, meaning that the rest of the movie has RoboCop walk around while sporting a very human visage. He’s plagued by memories of the past just as his original counterpart was, but his wife Clara (Abbie Cornish) and son David (John Paul Ruttan) are included throughout as emotional leverage, suggesting that if only OmniCorp would get out of the way, then the Murphys could all be a happy family again.

This whole approach earns some minor points for trying to avoid a total repetition of the original movie, but these changes to the titular character kind of miss the point entirely. They strip Murphy’s arc of its most tragic angle, that his transformation has saved his life and yet robbed him of his off-duty happiness. In Verhoeven’s pic, Murphy maintains some semblance of his human self, but those shreds of humanity can only be applied to his position as a law enforcement officer. He is literally “all cop” as the tagline states. Ultimately, his human elements can fight the programming, but he can only ever be a better cop and not a better man.

The 2014 Murphy doesn’t face such an existential problem, instead having to merely deal with an OmniCorp-set singular focus that causes some issues when Clara tries to have a little one-on-one chat with her husband while he only has eyes for crime solving. That may sound like a similar predicament to the one the RoboCop of old faced, but it’s all just a temporary obstacle here, a hurdle that our hero can leap over once he snaps out of that particular mode and gets in touch with his human side, complete with that face that always reminds us that we’re looking at something more man than machine. The catch that comes with this new approach to the character is that he can’t get too emotional or the robotic tech that is his body will fail. At first this information sounds like a preventative measure to ensure that things don’t get too treacly at any point, but mainly it acts as a sort of fail-safe workaround that guarantees Murphy will remain stoic and not smile a whole bunch. So now he’s a guy who struggles to show his emotions, not one who struggles to feel them. 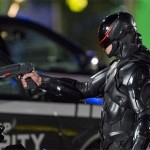 It’s a crucial change that simplifies everything about this incarnation of the character. The other crucial change is in the tone. While Pat Novak provides some room for satire with his right-wing sensibilities that promote a machine-heavy police state, this RoboCop incarnation is mostly a deadly serious affair. This goes well against the dark, nasty grain that Verhoeven’s pic followed with its wicked sense of humor. That Padilha is interested at all in poking fun at the dangers of handing the reins of national defense over to a soulless corporation is wonderful and the injections of Novak’s TV program throughout are very welcome. It’s just a shame that this RoboCop settles into a cozy little groove and stops having fun with its skewering of OmniCorp’s villainous agenda.

When the subversive comedy has been safely removed, Padilha’s movie just becomes another tale of an evil corporation trying to make a buck the cruel way. Take out the corporation (or at least its corrupt head) and voila! Problem solved. Go hug your family now, Mr. RoboCop. Credit goes to Padilha for preventing this standard happy-ending-friendly hero arc from getting too overly sappy in execution, but try as he might to mask it, the movie is clearly striving for a sentimental ideal.

In spite of all the bad decisions here, the first chunk of the movie does work pretty well and keeps the movie in decently serviceable territory until it reveals how misguided and lame the second half is. There are nice ideas, such as RoboCop being built and stored overseas at an OmniCorp training facility in China. An American icon, outsourced. And the cast is quite robust, with Jennifer Ehle, Jay Baruchel, and Jackie Earle Haley all joining the aforementioned other talented cast members. But once it’s time to unleash RoboCop on the streets of a fine-looking Detroit (the dystopian touches are undercooked this time around), the movie falls into the same trap as its titular character. It becomes locked into a dreary combat mode marred by action sequences so boring that I imagine even Padilha was passing out in his director’s chair. By the time this RoboCop is prepped to aim for the heart, its plot and tone are too programmed to make any refreshing impression. This is the modern Hollywood’s RoboCop, referencing instead of respecting, moralizing instead of satirizing, and giving us a face to cheer for instead of the cold steel of a tragic machine. 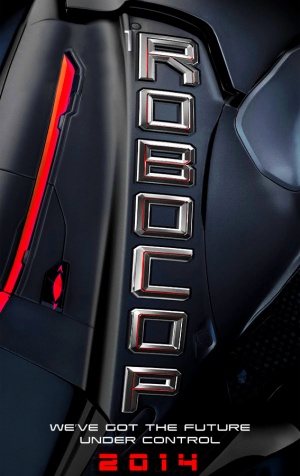