As far as random indie comedies starring a mix of rising and veteran stars go, the darkly silly Corporate Animals is a surprisingly digestible serving of oddball nonsense. For starters, it concerns itself with a team-building retreat that goes awry when employees of a company that makes edible utensils are suddenly forced to consider each other edible as well.

To sweeten the deal, the movie stars Demi Moore (“Rough Night”) as the company’s cruel, overly controlling CEO, who stupidly insists that the guided hike the company is about to go on doesn’t pose enough of a challenge for her team, so they should all wander into a complex cave system instead. Her hapless employees follow along because they have to and it’s not long before they’re all trapped when a tremor jostles some rocks and boulders loose and blocks their escape tunnel.

After a while, everyone gets hungry and it becomes quickly apparent that the menu options are extremely limited. Cannibal comedy should, in theory, be a bit tough to pull off, but screenwriter Sam Bain and director Patrick Brice embrace the ridiculousness of the concept wholeheartedly and throw whatever wackiness they can envision at the screen, from surprising nudity to an animated hallucination sequence.

It’s a cheap, low-brow series of potshots at stuff like corporate identity, waste management concerns, #MeToo movement, and the perversion of idealism, except all thematic meat is more casually picked at than voraciously bitten into. Don’t expect a particularly toothy satire, since the movie never takes anything seriously enough to actually make an authentic statement.

This is just an excuse to put a bunch of funny people in a room (or in this case, a cave) together and see how much comic friction can be generated by stressing their characters out. Corporate Animals then works mainly because its cast is so game and they all have pretty decent chemistry together.

In addition to Moore, who is always fun to watch, Brice extracts laughs from a diverse group including comedy mainstay Ed Helms (“Tag”), “Deadpool” sidekick Karan Soni, “Saturday Night Live” alum Nasim Pedrad, “sheee-it” utterer Isiah Whitlock Jr. (“The Old Man & the Gun”), and “The Daily Show” correspondent Jessica Williams. Each cast member has enough screen-time to carve out their own unique personality and no one feels shortchanged overall.

Watching Corporate Animals isn’t necessarily any more fun than rattling off eating puns, but viewers looking for some light laughs should find themselves somewhat satisfied by the hungry ensemble. Even though it won’t fill you up, it’s still an amusing snack nonetheless. 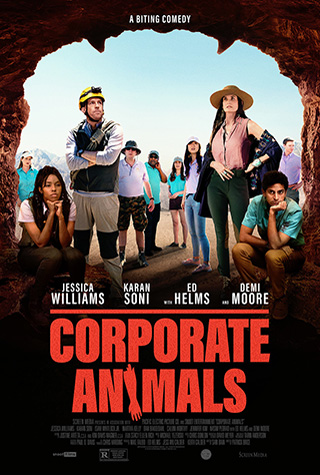