Movies often attempt to capture the breadth of a whole life fully lived, but few do so with little more than a single breath. That’s the aim of the lovely little short Bernie and Rebecca, which elliptically plays the part of a comedy at either end of its running time, while segueing sweetly into more dramatic territory for its compact, though emotionally epic middle portion. With less than 15 minutes of screentime to work with, director and editor Melissa Kent molds John Harris’ clever script into a tender tale of life’s trials and tribulations as imagined or foreseen over the course of a blind date’s final moments.

When somewhat awkward Bernie (Kyle Davis, “Friday the 13th”) walks the stunning Rebecca (Brianna Barnes, “The Day”) up to her door at the beginning of the movie, it looks like the end of their evening. But Bernie clumsily charms his way inside for a nightcap and we go along with him, unsure of where the date will lead next. When it looks like some intimacy is lurking around the corner, the tables are playfully turned and we get intimacy of a different sort than expected.

Rebecca launches into a verbal chronicling of their future relationship, including marriage and kids, and Bernie goes along with the charade, the two playing off each other like a comic duo trading laughs for tears. It’s a weird concept and difficult to describe, which only hints at how difficult it must have been to pull off for Kent, who inserts a couple ethereal pseudo-flashbacks of sorts, but mainly keeps the camera glued on her two principal actors.

Davis and Barnes have a lot to sell as they ride a wave of emotions from the highs of marital bliss to the lows of infidelity and heartbreak, all while keeping one foot floating in a pool of whimsy. Kent doesn’t let go of the humor, but she commits to the fantasy along with the actors so that the oddball conversation doesn’t slip into parody.

Amazingly, it feels genuine, as if a couple’s life together and apart, everything they go through over decades of shared experiences, can be boiled down to spoken words and felt through the telling over the course of a few minutes. Of course life stories can be shared verbally, but cinema generally favors the visual and even the heftiest of feature running times can struggle to contain a whole life’s worth of moments and memories.

Bernie and Rebecca comfortably juggles the weight of those moments by letting them linger only in the space between the two characters’ lips. They bounce back and forth across a timeline that doesn’t exist, simply referencing the highlights, the major milestones, and yet there’s something strangely moving because Davis and Barnes play the scene in such an increasingly passionate key that it feels like this all truly means something to them. It’s a fantasy that becomes a reality, however briefly. Being able to articulate the ups and downs of two lives with just a couple actors on a couch is a particularly unique gift. It’s an idea that starts silly and becomes beautiful, the human experience as comically complex as it is dramatically daring. 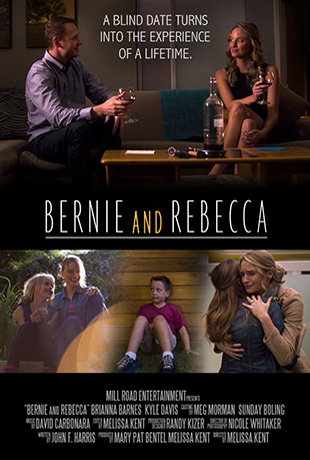