The Invisible Man has been the cinematic subject of effects extravaganzas (most notably James Whale’s 1933 adaptation of H.G. Wells’ classic novel), wartime propaganda (“Invisible Agent”), deadpan comedy (“Memoirs of an Invisible Man”), and psychosexual satire (“Hollow Man”), but rarely has he ever led a straight horror film. This is the hole that filmmaker Leigh Whannell (“Insidious: Chapter 3”) is looking to fill with his new movie, The Invisible Man, which doubles as a relaunch of Universal’s long-running, oft-refashioned Monsters franchise.

In this version, the titular character is a true villain in the form of successful scientist Adrian (Oliver Jackson-Cohen, “The Raven”), an abusive antagonist to Elisabeth Moss’ (“Us”) traumatized protagonist Cecilia, who incurs Adrian’s wrath when she orchestrates a nighttime escape from his obsessive clutches. This hushed, harrowing sequence forms the movie’s incredibly intense opening, which says all we need to know about the couple’s relationship.

Living together in a secluded mansion at the edge of a rocky cliff overlooking the roaring Pacific means that Cecilia’s carefully planned departure is an obstacle-filled gauntlet. It’s an all-or-nothing dash for freedom that instantly establishes both Cecilia’s courage and the threat that the tightly wound Adrian poses.

Whannell’s decision to sharply define the two main characters on either side of the conflict in such a primal manner sets the movie on a fast and frightening track, one that ratchets up the tension from the first moment and immediately informs us of what’s at stake. It also puts us in Cecilia’s shoes from the very beginning.

Most other Invisible Man movies (at least temporarily) position themselves from the titular character’s perspective, chronicling how they descend deeper into madness as the psychological effects of their invisibility take hold, but Whannell’s narrative is intrinsically tied to Cecilia’s experiences and anchored by Moss’s stunning performance.

Following the bristling beginning, Adrian is almost completely absent for a while, occupying only a considerable amount of space in Cecilia’s head. Our heroine has retreated to the suburbs and is now hiding out in a friend’s house, but even after Adrian’s body is identified in an apparent suicide, Cecilia can’t shake the feeling that she’s being watched.

Strange occurrences start to add up, but Whannell cleverly toes the line between honestly depicting what Cecilia sees and showing us what amounts to very little. While movies that deal with invisible characters often explore the potential for dazzling visual effects, Whannell mainly focuses on the unseen, aligning our viewpoint with Cecilia’s growing paranoia.

Like Cecilia, we’re convinced that Adrian is still out there, but no one else believes her because the evidence is so scarce. And so Whannell’s camera stares into seemingly empty spaces as actions unfold at the edges of the frame or involve such subtle movements in wide stationary shots that we’re left to question what we just saw (or didn’t).

This approach keeps the budget down (less than $10 million, a mere fraction of the nearly $100 million price tag for “Hollow Man” from 20 years ago) and further pushes the picture into terrifying territory. With Adrian silently stalking Cecilia’s every move and burrowing ever deeper into her head, haunting her from the shadows, the movie is more ghost story than science fiction and Adrian more poltergeist than person.

Whannell takes his time with the scares, which proves an effective method because the sense of danger is, presumably like Adrian, omnipresent. The audience is left to expect a fright at any point, but much is left to our imagination in the first half, and by the time Adrian ramps up his reign of terror to more blatant displays of his hidden powers, Cecilia’s influenced actions have already convinced the various characters orbiting around her — sister Emily (Harriet Dyer, “Killing Ground”) and cop friend James (Aldis Hodge, “Hidden Figures”) — that she’s become unhinged.

The script makes Adrian an evil genius capable of thinking multiple steps ahead, which may lead to some far-fetched scenarios, but also helps keep The Invisible Man laser-focused on the cat-and-mouse game unfolding between hero and villain. Adrian will stop at nothing to break Cecilia one way or another, making him an eerily immovable force that further alienates Cecilia from everyone else in her life.

For all the myriad ways that the cards have to fall in Adrian’s favor to make certain plot points possible, the story remains believable because the villain’s monstrous motivation is so singular. He has only one narrow goal in mind and endless time and resources to realize it. He also knows his victim intimately, as Cecilia explains throughout the movie, so he’s preying on her from a uniquely advantageous position of power.

Having Moss in the lead also lends each scene an engaging authenticity and excitement. She plays scared in a way that isn’t predictable or superficial. Her face conveys multiple emotions at once without ever exaggerating any of them for some strained dramatic effect. And Cecilia is ready to fight for her freedom, so Moss must mix her character’s profound apprehension with a steely resolve that hinges on Cecilia’s desperate need to cut Adrian out of her life once and for all.

As the movie approaches its deliciously dark finish, Whannell continues to tighten the screws while executing an immensely satisfying payoff for the audience. His commitment to the genre this franchise has generally skirted around makes for a unique take on a character that first graced screens under the Universal banner nearly 90 years ago. The Invisible Man remains a taut fright flick to the very end, proving in the process that even an old monster can learn a new trick. 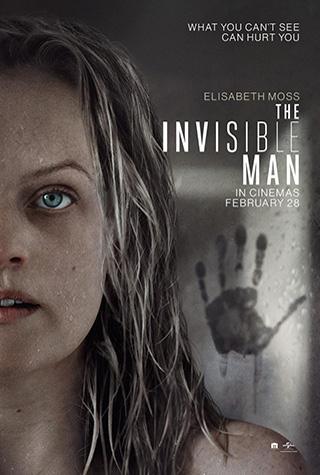