The Down Under is home to danger — again.

To the internet, Australia is “Nopeland,” deserving such a name after reading the various listicles or clips about lethal horrors that a person may find in the wild. Among them, crocodiles have had most success invading cineplexes, appendage-to-appendage with equally bloodthirsty bushmen. While we are waiting for a project where a “Wolf Creek”-esque antagonist torments backpackers with his “Rogue” pet, debut filmmaker Damien Power has an outback gothic to show, one that can’t stop calling out to other doomed excursions every step of the way yet ultimately a not-too-shabby experience.

A bend in the river not so far from Gungilee Falls is exactly the camping spot that Ian (Ian Meadows, “Scare Campaign”) and Sam (Harriet Dyer, “Ruben Guthrie”) need — serene enough for genuine relaxing, isolated enough for some pre-planned lovemaking and picturesque enough to carry out a marriage proposal. What a way to celebrate New Year’s Eve. That happiness is cut short when there seems to be a darkness looming in the area in the forms of an abandoned SUV and a family-sized tent without a family around . . . ever. Afterward, in a haunting long take, Sam walks on, oblivious to a bruised toddler stumbling from the surrounding woods and toward her. Ian jumps in, demonstrating his credentials as a doctor and asking his wife-to-be to be a nurse. Right then, a white utility vehicle arrives, and out of it a rabid-looking driver called Chook (Aaron Glenane, “Horizons Crossing”) with a rifle . . .

Things in Killing Ground don’t exactly happen this straightforwardly, but therein lies the neatness. The non-linear structure, which sees Ian and Sam’s story occasionally intertwined with that of the other tent’s inhabitants and the killers’, attempts to make both the eventual “hunter fodder” and “fodder hunter” more relatable than usual as well as tightening Power’s already-firm grip on the atmosphere. Ian and Sam don’t know the history of the land like the family’s father (Julian Garner, “Home and Away” TV series), and not long after his telling realizes that it does little to soothe the nightmare-prone daughter (Tiarnie Coupland, “Love Child” TV series). Whereas protagonists of this subgenre mainly pull the trigger for sport (and the gorehounds in us), Chook does it to reaffirm his masculinity, something his Josh Brolin-lookalike mentor and housemate (Aaron Pedersen, “The Fear of Darkness”) is willing to help out with — albeit rather criminally.

Eagle-eyed and rabbit-eared viewers will be able to reorganize the timeline — hinted through objects and dialogue of interest — before the film begins to, though Power’s well-paced unfolding of the narratives helps dampen the awkwardness.

But “Dunkirk,” this isn’t, and so comes the point where Killing Ground starts to embrace formula — it being the only thing left to hold onto. Progression now seems to be dependent on a checklist; events now occur where and in the manner that they are expected to. The presence of a mechanical backbone overwhelms the shock those instantaneous bursts of brutality and showcases of cowardice were designed to concoct. The latter would have had more impact since it really reflects how not everyone can “power up” under duress. Or, from a moviegoer’s perspective, Australia isn’t the place where the “‘Murica!” mindset is prevalent.

So, thankfully, Killing Ground is spared from that anticipated eruption of gung-ho-ism. Still, to truly overtake the made-in-Hollywood counterparts, the film should have tried to stretch its most refreshing feature to the very end. It won’t change the perilous image the web has bestowed upon Australia, but at least the perils are described with a smidgen of newness this time around. 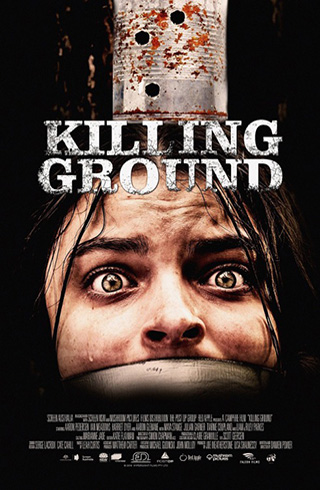