And with that, the war on Valentine’s Day is over.

It took two films, but finally Christian (Jamie Dornan, “Anthropoid”) shows off the smarts they said made him capable of running a company: Using just one ring rather than many cables to bind his love, Anastasia (Dakota Johnson, “How to Be Single”). Fifty Shades Freed opens with Ms. Steele blooming into Mrs. Grey — or, more precisely, wife to her man. For their honeymoon, they bounce to Europe, first Paris and then Monaco — a.k.a. Boob Land, as Anastasia calls it. Meanwhile, Jack Hyde (Eric Johnson, “Orphan Black” TV series) returns, mining a wallop of data for revenge and stuff in the middle of the Greys’ session of cuffed consummation on Riviera waters.

Seems like the “Fifty Shades” series finally knows the meaning of “stakes.” Wait, that doesn’t sound or spell like “sex,” and so it will be treated with as much substance as a half-night stand. That exclusive obsession with and of the flesh, hollow as it is, elevates E.L. James’ “writing” into the phenomenon we know today, and that’s something scribe Niall Leonard immaculately translates to the screen adaptations. It’s tortuous. Variation occasionally comes in the form of Christian’s, or Ana’s, irresponsibility to bear the fruits marriage may sow, but Leonard builds them with great disinterest, zipping by them like they weren’t there and making fornication the plot’s backbone. In retrospect, that’s the writer’s intention and voice in which no one will deny. And so the cheapening, even smearing, of a peculiar kind of romance is at its most rampant, and the want for proper dialogue and plot points has finally become make-believe.

It’s clear Johnson and Dornan are tired. Can we blame them, really, upon knowing the story, as it goes on, is in essence less about them and more about their next bedroom trick? Kudos, still, for the production to get Audi and Ben & Jerry’s to go along with the ride, pun unintended. So visible is the leads’ ennui from — or most of their existence throughout the trilogy — trapped in a single note of either nearing climax or causing one. Semi-understandably, the “Fifty Shades” series is about having fantasies satisfied, but all ring false when one minute after another until the end is just that. For three films. And now Christian knows how to sing, too! Imagine a dream where the elements within keep lunging at you with “You can see me now because you’re sleeping.” At least Dornan gets to play drunkard at one point, which is genuinely amusing. Johnson continues to imbue Anastasia with that about-to-do-an-eye-roll trait, again being the perfect audience surrogate. These aren’t average actors — Dornan, like Chris Hemsworth, knows funny (see his parody with James Corden); Johnson can be heartrending when her character is crafted like a human being (see “Black Mass”). They’re free to go now, and that’s a cause worth celebrating.

Like its two predecessors, the style-guide look of Fifty Shades Freed is the only thing not set out punish, test, or corrupt our inner goodness. There’s no trouncing the refined garbs and modish sets of “Fifty Shades of Grey,” but Shay Cunliffe’s costumes and Nelson Coates’ production design do fleetingly liven the sterile atmosphere. That said, a more inspired method to get the film’s look for yourself and your abode is to read up GQ or Cosmopolitan. Better writing lives there, as well as more tricks to give intimacy some color — in other words, love less like Greys do. 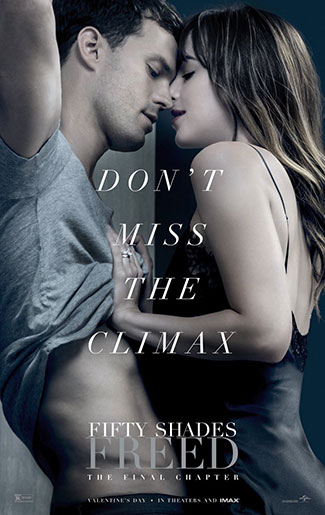