One thing you can say about the fourth collaboration of Spanish filmmaker Jaume Collet-Serra and his avenging one-man army lead Liam Neeson: They certainly know how to revisit a movie formula and belabor it to death. In the stylish yet tepid transport mystery/thriller The Commuter the concocted suspense is needlessly derailed for yet another exploration into familiar territory that Neeson has woodenly demonstrated before such as working middle-class malaise, familial jeopardy, kidnapping, shadowy baddies and an overactive taste for showy shenanigans in the name of unbridled vengeance.

Collet-Serra and Neeson conveniently trade their adventurous transportation mode on a plane (as featured in their forgettable skyline actioner, “Non-Stop”) and rechristens the same kind of sluggish momentum aboard a speeding commuter train. Although The Commuter is not what one would label an absolute train wreck, Neeson’s ragged everyman out to draw blood in a high-stakes cat-and-mouse game is nothing other than the repetitive shtick that Neeson has been doing so well since “Taken” wowed audiences ten years ago.

Michael McCauley (Neeson) is the typical hard-working family man that dotes on his loved ones. McCauley, an ex-cop-turned-decade-old veteran insurance salesman, has undergone the monotonous daily routine of schlepping to work via the Metro-North train into Manhattan. Unfortunately for Mike the money is tight due to big time mortgage woes and his child’s pricey education. Still, McCauley’s determination to faithfully partake in the drudgery of insurance work is an obvious necessity needed to keep his clan financially afloat. However, Mike McCauley soon receives an alarming wake-up call when he is inexplicably fired from his employer, leaving him in a more precarious position than he already was.

While disillusioned about his unemployed status, McCauley is approached on the train by a strange woman named Joanna (Vera Farmiga, “The Conjuring 2”) with a mysterious proposition for the recently laid off working stiff. Joanna’s challenge to McCauley is both beneficial and risky for the ex-insurance man — find a passenger named Prynne and for his efforts he gets a payoff of $100,000.00. Additionally, the incentive for the harried McCauley to carry out his search is further complicated by the revelation of his wife (Elizabeth McGovern, “Woman in Gold”) and son (Dean-Charles Chapman, “Before I Go to Sleep”) being kidnapped to ensure that McCauley is properly focused and carries out his required commitment to completion.

And so the stone-faced Neeson goes into his signature statuesque form that we have seen countless times before. Exaggerated fist fights, hanging out of windows, feisty encounters with fellow passengers, ducking and dodging shady operatives — all performed on a speedy train heading down the symbolic tracks of manufactured treachery. McCauley is pounded and pressured by the corruptible obstacles that are thrown his way, but hey . . . the desperate undesirables that purchased his services want what is theirs and are pulling the strings hard to get their family man to solve their predicament.

There is nothing refreshingly intriguing or distinctively dire about using the concept of a speeding train as the confined setting for the foundation of the film’s psychological edginess. Sure, the dynamics of random train passengers commuting from point A to point B could have registered effectively, tapping into the curiosities, cynicism and mystique of the traveling masses. Sadly, however, the commonplace script cobbled together by screenwriters Byron Willinger, Philip de Blasi and Ryan Engle skips all that and merely chugs along the rails with all the recycled thrills of an arbitrarily orchestrated Neeson-led pot-boiler.

Nonetheless, the gritty, avid Neeson fans (of which there are surprisingly many) will probably still blindly embrace the excitable yet formulaic premise of The Commuter without much resistance, as the one-time Oscar-nominated actor (“Schindler’s List”) seems quite motivated by the moody material. And although he is going through his usual action thriller motions, he does them well and does not disappoint. 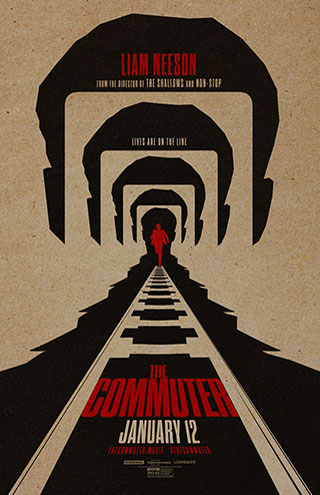