In late 1974, a young man brutally murdered each of his family members with a shotgun in the middle of the night. He killed his parents, his two brothers, and his two sisters, some of whom were determined to have been awake at the time of his entry to their rooms. When questioned, Ronald DeFeo claimed voices told him to kill his family. A little over a year later, a family of five who had purchased the house in Amityville, New York fled after living there for only twenty eight days. Their story was well-documented by news media and was immortalized in The Amityville Horror, a novel by writer Jay Anson, which was adapted into a film by the same name in 1979. The Lutz family, however, was accused of attention mongering, and reports emerged that their claims were completely unfounded. A reporter called in paranormal investigators Ed and Lorraine Warren, who were intensely overwhelmed by a dark presence in the house, and were unable to explain their experiences.

The case remains one of the most contested instances of paranormal and demonic activity in the country, and serves as the prologue for James Wan’s The Conjuring 2, which chronicles the torment suffered by a family in Enfield, England — a case which has been compared to Amityville.

In 1977, a single mother of four reported terrifying occurrences in their home. Peggy Hodgson and her children described furniture moving on its own, strange pounding and other noises in the walls and ceiling, and their beds quaking. Even a police officer signed an affidavit describing a chair moving across the room of its own volition. Desperate for help, Peggy contacted the press and the Society for Psychical Research, who sent investigators Maurice Grosse and Guy Lion Playfair; photographers captured images of the girls levitating and an audio recording documented the voice of an old man emitting from 11-year-old Janet. The voice claimed to be Bill Wilkins, a man who had died in the house, but eventually, investigators questioned whether the children were playing pranks and whether there even was an authentic haunting occurring in their home. The Conjuring 2 is billed as another true paranormal investigation conducted by Ed and Lorraine Warren, but there are conflicting accounts of whether they were actually invited to assist the Hodgson family. The Society of Psychical Research were the primary investigators on the case, working with the Hodgsons for two years, and SPR investigator Playfair has claimed the Warrens were never contacted directly, but showed up on their own, looking for publicity.

Putting aside the typically misleading “based on a true story” label, The Conjuring 2 is another fascinating study in tension and suspense by the new master of horror, James Wan. It begins in the Amityville house, the most well-known of the Warrens’ cases, with Lorraine (Vera Farmiga, “The Judge”) sensing an incredibly powerful malevolent presence in the house’s basement. Terrified, she and Ed (Patrick Wilson, “Insidious”) return home, and she makes him promise they will take fewer cases, as she fears for their safety. She is plagued by the same demonic presence in her own home, and she takes the visions as premonitions of impending danger for her husband.

Meanwhile, we jump the pond to England, where the aforementioned Peggy Hodgson (Frances O’Connor, “Jayne Mansfield’s Car”) is angry with her children for causing disturbances in the middle of the night. Billy (Benjamin Haigh) claims that someone is lurking in his tent, Margaret (Lauren Esposito) reports that her sister is talking in her sleep to some unknown person in their room, and Janet (Madison Wolfe, “Keanu”) describes going to sleep in her own bed, but waking up on the floor of the living room downstairs. After hearing that their beds were quaking in the night, Peggy gets frustrated with her children, but watches in terror as a dresser moves to block them from the door. They contact their neighbors and the press for help, and call in Maurice Grosse (Simon McBurney, “The Theory of Everything”) and Dr. Anita Gregory (Franka Potente, “The Bourne Supremacy”) from the Society of Psychical Research. The disturbances increase in frequency and intensity, and center around 11 year old Janet, isolating her from her family. After Ed and Lorraine are contacted by a priest for assistance, they decide to travel to England to help the Hodgson family, and to determine whether the church should be involved in the case.

When a story of a true haunting is brought to the screen, elements are exaggerated for effect and the truth is understandably stretched, but we’re not here to investigate the truth; we’re here to see a really good horror movie, and director James Wan delivers a doozy. Collaborating on the story with Carey and Chad Hayes, and adding David Johnson to the screenwriting team, Wan takes the Hodgsons’ story to a fever pitch, providing audiences with a film that doesn’t rely on cheap jump scares or cheesy special effects. The cinematography places the audience right in the middle of the action, and we stand by a small boy who can’t help but peer around the door frame down the hall to see what’s making those sounds in his tent. We gaze uneasily into the corner shadows of the bedroom to see if we can’t make out a figure whispering to our sleeping sister. And we pray that our eyes are playing tricks on us, that we didn’t just see something moving in the waters of the flooded basement. Wan masterfully blends imagery and sound, and doesn’t simply make you jump because he turned the volume knob all the way up.

Just as the Hodgson family lived on eggshells in their own home, we the audience are on pins and needles during the entire film, looking anxiously through our fingers to see what’s lurking in the kitchen, or in the living room, or in a child’s bedroom. Our terror comes from our childhood fears of the dark, or more specifically, what’s IN the dark. Madison Wolfe is an excellent young actress for whom we worry about throughout the film, and her siblings are just as charming, especially young Billy, played by Benjamin Haigh, whom you just want to scoop up and hug. The Hodgsons are a family you care for, which makes their relentless torment twice as unnerving. Wilson and Farmiga continue their chemistry as the Warrens, and interject small believable moments of levity into the dark tale, just as any of us would use a quip or a tender moment to try to ease our fears.

Knowing that a story is based in reality makes a tale like this all the more frightening, even though we rationally know many of the details aren’t so true, and even though we know some of some reports by the victims might be exaggerated for effect or attention. While “The Amityville Horror” is an iconic pillar in horror, The Conjuring 2 rivals its effectiveness, and despite a few schmaltzy elements (found in every horror resolution, to be fair) the film is sure to leave an indelible mark on audiences everywhere. Bravo, Mr. Wan; you’ve earned your place, for sure. 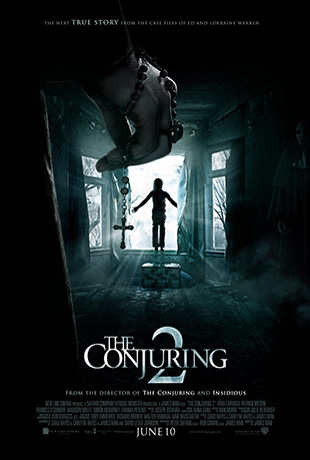