Did you know that it takes a village to raise a horse?

When it comes to cultivating anything: Time, patience, tenderness, love, and care are all essential. Many of us want something and success (in whatever area that excites you) is almost always on the top of the list. To experience the potential payoffs of hard work, diligent dedication drives us into uncharted stratospheres.

That’s what happened with Jan Vokes, a barmaid from Wales, who whimsically decided to get into the horse racing business. Along with her husband, Brian, and many friends, they managed to buy a super cheap horse that was super not-so-fast. He was given the name “Dream Alliance” and became the subject of this new documentary Dark Horse.

Director Louise Osmond (“Deep Water”) wants Dark Horse to connect with us by presenting a tale about people (and a not-so-fast animal) who defy all the odds. Surely it’s a great theme as its been used countless times before, but is Vokes’ journey so different that it’s worth the ride?

Stylistically, the film uses traditional documentary storytelling tactics: Talking heads, archival racing footage, and some reenactments. However, the story feeds most of its important information audibly. While this helps present everything in a straightforward fashion, this saps our ability to be stimulated by what we see. As it is, this tale would be better suited as a book or an NPR radio segment.

Typically, what hooks us into any story — whether the premise is any good or not — is fascinating characters. In Dark Horse, unfortunately, the personalities we see don’t sizzle onscreen. Jan and her friends are ordinary people who have some extraordinary success with “Dream Alliance.” That’s the novelty of this movie, but it shouldn’t be an excuse for lackluster entertainment. Milking the underdog angle is all it seems interested in doing.

Without question, Osmond is clear in what she presents. However, it lacks the vision to sweep us into a sport that has become more niche as the years go by (even with the phenomenal success of “American Pharaoh,” the first horse, in 2015, to achieve the elusive Triple Crown and the Breeder’s Cup in the same year). For a film that isn’t very long (only 85 minutes), it seems to drag because its storyline appears too thin. Despite that, the stakes are relevant and adequate enough. Based on race horse maintenance logic, you can probably guess some of the trials that Jan, her team and “Dream Alliance” have faced over time.

Although Dark Horse has earned British Independent Film Awards’ Best Documentary and Sundance’s Audience Award, outside of documentary lovers and horse racing fans, I don’t see it becoming an unexpected winner at the box office or home rentals as “Dream Alliance” and its owners were on the horse track. 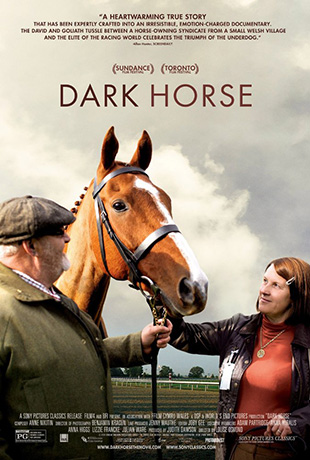