If extra-terrestrial visitors eventually show up on Earth’s doorstep in flying saucers powered by anti-gravity reactors and then announce they’ve been here before, Bob Lazar will have dibs on a very exasperated “I told you so!” That’s pretty much the chief takeaway from Jeremy Kenyon Lockyer Corbell’s cheapo documentary with the no-nonsense title Bob Lazar: Area 51 & Flying Saucers.

It’s been nearly 30 years since Lazar, a physicist with an inexplicably shadowy past, decided to spill the beans to the media about highly classified work he did at a top-secret government base in the Nevada desert, where the famed Area 51 is mysteriously located. Lazar claimed that he had been hired to reverse engineer several alien spacecraft with the hopes of harnessing the saucers’ astonishingly advanced technology.

According to Lazar, he felt that the American people were being done a disservice by a deceitful government, so he came forward with his story. Apparently, he’s been dodging death threats, assassination attempts, and FBI raids ever since.

On the surface, it has all the makings of a great story, from the bookish whistleblower matter-of-factly describing a supposed collision of fact and science fiction to the alleged attempts to silence him, but the movie fails to explain why this strange tale is being dredged up again now. There’s hardly anything new to share and there’s actually very little story to tell.

Corbell simply seems to be interested in the topic, so he did some research, got some access to Lazar, and decided to make a movie of it. In the moment, following leads and uncovering slivers of suggestive info must have felt pretty exciting, but the end result is a repetitive and rudimentary rundown of conspiracy theories with fraying loose ends.

Bob Lazar: Area 51 & Flying Saucers is basically Corbell cobbling together interviews with Lazar and occasionally chatting with investigative reporter George Knapp, who originally interviewed Lazar back in 1989 when the physicist decided to go on the record about what he’d seen at the base known as S4. Knapp has apparently remained invested in the flying saucer story for the last three decades and is, like Corbell, quite sure that Lazar is legit. Their conversations are just two guys convincing each other of the same thing they both already believed in.

Herein lies a significant problem that Corbell can’t be bothered to address. This is a movie that preaches only to the choir, so if you want to believe that the U.S. government has been in possession of alien technology for decades, this movie will pat you on the back. If you don’t want to believe in that sort of thing, this movie will rehash enough of its points enough times that you’ll be thoroughly irritated by the end and no more convinced than you were at the beginning.

As an interview subject, Lazar is relatively affable and articulate, but he often seems slightly annoyed that he’s still talking about this and additionally coasts along as if on auto-pilot, repeating anecdotes and explanations with all the passion of a programmed machine. Perhaps understandably, he’s also quite defensive about the whole situation, eager to be taken seriously and yet exhibiting zero patience for anyone that even thinks of questioning his story’s validity.

On the other end, Corbell is almost childlike in his excitement and eagerness to believe. He enthusiastically shares any shred of evidence that he’s found that might corroborate Lazar’s claims and acts as though the tiniest glimmer of information, such as some scientists admitting they can’t officially deny the existence of an enigmatic element, is a Holy Grail of proof instead of the near nothingness that it actually appears to be.

The issue isn’t Corbell’s willingness to accept Lazar’s story as absolute truth, but rather the glaring discrepancy between how little new information the director is actually unveiling and how much time and attention he devotes to these scraps.

At one point, a clandestine meeting between interviewer and interviewee is built up as if to suggest that it’s the extra-terrestrial equivalent of Deep Throat meeting Woodward in the parking garage and yet nothing of consequence is revealed other than that the FBI might be listening in. The FBI’s interest in Lazar fuels much of the assumed mystique of Bob Lazar: Area 51 & Flying Saucers, but Lazar has to remain mum about the details and Corbell just fills in the blanks on his own.

It’s another dead end, a tiny scrap of narrative information that the movie relies on for dramatic purpose in absence of anything else. For all of Corbell’s passion, he can’t simply will the story into existence. There’s just only so much that Lazar can say on the subject and then it’s up to the director to provide further context. But that context leads to dull and uninteresting places, like Corbell trying to prove that Lazar was actually interviewed for the S4 job at a specific location named by Lazar, as if confirming that the job existed is proof that Lazar tinkered with alien technology.

These leaps of logic prevent the movie from becoming a serious examination of its subject and further highlight how little proof is or ever will be available to the public. It’s then left rather openly to us to decide whether or not we want to believe Lazar’s story. Corbell can’t make a very compelling argument for either position. Also, randomly enough, neither can Mickey Rourke.

The gravelly-voiced actor whose career has pinballed him back and forth between the A-list (“The Wrestler”) and the Z-list (“Passion Play”) is operating at rock bottom here, gurgling out philosophical mush that plays over erratically inserted and laughably silly computer animation sequences. These moments are the epitome of an afterthought, likely a late attempt to drum up some potential publicity by being able to put a semi-famous actor’s name in the marketing materials. Rourke’s ramblings feel completely disconnected from the rest of the movie and the animation that accompanies his voice-over does the movie no visual favors.

A viewer might walk away from Bob Lazar: Area 51 & Flying Saucers with a sense of who Lazar is, but they won’t likely find themselves swayed in any one direction. This is a movie and a subject that plays best to the believer, but even then, it offers precious little substance. By the time the movie ends as Corbell finds he has no more tidbits to share, it’s at least quite clear whose side the director is on. Lazar won’t be alone in feeling vindicated if E.T. ever comes knocking at Earth’s door. 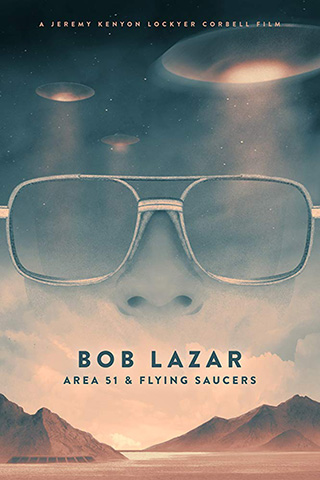