When Sony announced its plans for a theatrical release of an animated Spider-Man film, even hardcore fans of the web swinger may have considered it to be just another unwarranted adaptation. “Haven’t we seen enough portrayals of Spider-Man?,” those with comic-book movie fatigue asked, and yet in his seventh major solo theatrical release since 2002, the wall crawler still finds a way to make his charming perspective and admirable mantra of great power and even greater responsibility instill a sense of wonder. Though you may have lost count of just how many times you’ve seen the character swing through the skyscrapers of New York, this bright and uplifting iteration, titled Spider-Man: Into the Spider-Verse, offers a refreshing and heartwarming portrayal through complex animation which is as, if not more-so, captivating than the live-action comic-book films fans have been blessed with in recent memory.

Co-directors, Bob Persichetti, Peter Ramsey, and Rodney Rothman, brilliantly approach the character from a new perspective, diving into quantum theory and the manipulation of entire dimensions and their inhabitants, creating an intriguing plot for Spidey to swing around in. But what the directors do most impressively, is balance the action of this beautifully animated film, with themes that comic-book fans, and film lovers alike can find emotionally resonating.

These themes include finding oneself at the most confusing and challenging point of one’s youth, discovering and embracing redemption from the lowest of emotional depths, and trying to define one’s self-worth and contribution to society as a whole. Subjects as these are not unfamiliar to the original Spider-Man, Peter Parker, but they are newly applied to our main protagonist in Spider-Man: Into the Spider-Verse, Miles Morales (voiced by Shameik Moore, “Joyful Noise”).

Like Peter Parker before him, Miles struggles to find a position where he feels valued and welcomed, and struggles with the expectations of his parents as he’s moved from a standard high school to a more elite boarding school. He quickly develops a level of resentment for his parents that fuels his pursuit of passion and belonging. The film’s metered progression allows us get to know Miles, his passions, his quirks, and his motivations. He has a close relationship with his uncle Aaron (voiced by Mahershala Ali, “Green Book”), but seems to be watching his relationship with his parents deteriorate. It appears his uncle is the only one who understands just how he likes to express himself, which is through graffiti.

If there wasn’t enough discombobulation for Morales up until this point, he’s given almost too much to handle when he’s bit by a radioactive spider and begins to develop wall crawling, spidey senses, and all of the other trademarked traits we’ve come to know and love (and a few new ones). Without giving away too much of the film’s premise, Miles soon finds himself in a position where his heroic efforts are needed but he hasn’t quite grasped the true dedication and devotion that is required of a full-time Spider-Man.

Through the perspective of this troubled hero in training, we’re thrust into surely the weirdest, but arguably most fun Spider-Man film yet, as alternate universes collide and we’re introduced to the Spider-heroes of other worlds, specifically Peter B. Parker (voiced by Jake Johnson, “The Mummy”), Spider-Gwen (voiced by Hailee Steinfeld, “The Edge of Seventeen”), Spider-Ham (voiced by John Mulaney, “Big Mouth” TV series), Peni Parker (voiced by Kimiko Glenn, “Nerve”) and Spider-Man Noir (voiced by Nicolas Cage, “211”). Through this premise, writers Phil Lord and Rodney Rothman present a camaraderie that hasn’t been presented as emphatically since Marvel’s original team-up, “The Avengers.”

The film is nothing short of a love-letter to fans of Spider-Man, his motivations, and even his creator, who’s brief cameo will surely hit a soft-spot for even the most casual Marvel fans. Even with these deep emotional plot drivers, the Phil Lord/Christopher Miller touch (“The Lego Movie”) is alive and well in the film’s unabashed quips and humor, which keeps it from becoming as brooding and dispassionate as it could have easily become. The same praise can be given to the voice cast, whom all provide a sense of levity in their characters. Performances which stand out in particular are Shameik Moore’s youthful performance as Miles Morales, as well as Jake Johnson’s take on an older, out of shape Peter Parker from an alternative reality. The back and forth chemistry between these two could remind older animated fans of the back and forth arguments of Bugs Bunny and Daffy Duck, matching their level of sarcasm while also mimicking their opposing, but complimentary, personality traits. The vocal performance of Brian Tyree Henry (“If Beale Street Could Talk”) as Mile’s police officer father Jefferson also deserves mention as an anchor for the films empathetic goals.

Outside of writing and characters, the most amazing element of Spider-Man: Into the Spider-Verse is its stunning animation which is practically begging audiences to be viewed in IMAX. It’s color schemes are glowing, its action sequences jump off of the screen (even without 3-D), and its subtle homages to traditional comic book formatting is truly an example of this film’s intent to deliver an authentic comic book movie to fans. Even so, it would be hard to imagine an average moviegoer exiting this film not feeling invigorated, entertained, and to a certain extent comforted. It seems as though even in his seventh theatrical adaptation, Spider-Man can still make us feel as special as the first time we met him. 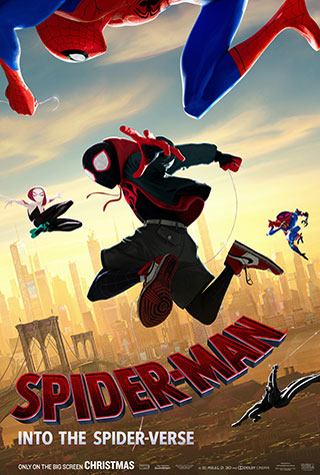