At a time when typical Hollywood fare consists of retreads and blockbusters aimed at mass markets, introspective and highly personal films have become increasingly rare. That alone is reason to celebrate Alfonso Cuarón’s (“Gravity”) Roma, an intimate journey that draws on the director’s memory of a childhood filled with domestic turmoil as well as a changing political landscape. It is primarily a song of praise to the role played in his upbringing by Cleo (Yalitza Aparicio), a domestic worker of Mextico origin who lovingly helped raise him. Working in the middle-class home of Sofía (Marina de Tavira, “The Lord of the Skies” TV series) and Antonio (Fernando Grediaga), Cleo was an integral part of the family that consisted of siblings: Sofi (Daniela Demesa), Toño (Diego Cortina Autrey), Paco (Carlos Peralta), and Pepe (Marco Graf) as well as Antonio’s mother Teresa (Verónica García).

Like Satyajit Ray’s masterful “Apu Trilogy,” Roma has both an epic and an intimate quality. According to Cuarón, the film is about “a moment of time that shaped me, but also a moment of time that shaped a country. It was the beginning of a long transition in Mexico.” Shown from the point of view of the woman whose stature and dignity as a human being eclipses any class considerations, it is the women who are the film’s focal point and its source of strength. The men play only a peripheral role and mostly a negative one. At one point Sofia tells Cleo that “it’s a woman’s burden to be alone and they are even, perhaps especially, alone in the company of men.”

Cuarón, who is the film’s writer, director, producer and cinematographer, said that the film “forced me to see her (Cleo) as a woman, and as a woman that comes from a disadvantaged social class, and also from indigenous heritage, living in a society where class, money, and race are directly related.” While there are some fictional elements, Roma is 90% autobiographical and was shot on the same location in which the events depicted took place or on sets that were exact replicas, including even the family’s old furniture. Shot in black and white and set in the Mexico City neighborhood known as “Roma” during the year 1970, the opening scene shows a close-up of a driveway as soapy water tumbles over stones and we see the reflection of an image of a plane against the sky, perhaps a hint of a larger world hovering in the background.

There are no dramatic events in the film’s early moments, only the cooking, cleaning, caring for the children and the other usual domestic chores of domestic workers that Cleo shared with Adela (Nancy García), a second worker. As the film builds, it engages us, not with the flow of a linear narrative, but as a series of small episodes that impel a sense of the continuity of life and the experience that everything is related. The family dynamic changes when Antonio tells them that he is leaving for an extended work trip to Canada, a lie that becomes obvious when he is spotted on a city street with his mistress. Meanwhile, Cleo’s life is turned upside down when she becomes pregnant from a relationship with Fermín (Jorge Antonio Guerrero, “Besieged” TV series), an overbearing and gruff martial arts practitioner who appears to have no intention of providing for Cleo and the baby.

The film also contains emotionally searing set pieces such as the forest fire that interrupts the holiday of a wealthy landowner, student demonstrators being mercilessly shot by paramilitary troops in what is known as the Corpus Christi massacre, a daring rescue undertaken during a family vacation at Tuxpan, and the earthquake that panics the staff of a hospital maternity ward. While there is no overt consideration of political issues in the film, we know that today there are three million domestic workers in Mexico, 95% of which are women, who have traditionally been subjected to inadequate conditions, long working days, and low salaries while not having access to benefits.

While progress has been made since The National Union of Domestic Workers was formed in 2015, Roma shines a light on the social inequality that still exists, providing a clear picture of the struggles of women in a macho society and of the human face of immigrants, so often stereotyped to the point where they become less than human. Cuarón has said, “There are periods in history that scar societies and moments in life that transform us as individuals.”

Roma is a film of empathy and heart that has the power to so transform. 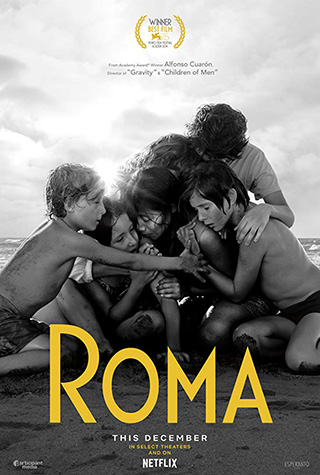