Few activities encompass the ominous banality of modern times like scouring the Internetscape; scrolling, swiping, clicking through apps and websites representing our digital lifebloods. Of course, we are all prospectors of that ever-expanding and blindingly confining world that is also, strangely, still very much in its infancy.

We’re also constantly learning how to adapt to it, in an age when the Internet allows us to accomplish so much without ever leaving our beds. It’s on the shoulders of that gilded oxymoron that Disney brings us Ralph Breaks the Internet, a sequel to 2012’s “Wreck-It Ralph” and an ambitious ode to ‘80s arcade culture that also served as one of the most gorgeously animated and surprisingly emotional recent flicks not to have been born at Pixar.

2018’s sobering follow-up sees Ralph (voiced by John C. Reilly, “The Sisters Brothers”) and Vanellope (voiced by Sarah Silverman, “Battle of the Sexes”) journey to the land of emoticons, e-messages and e-shops to find a replacement part for the latter’s arcade game, after Ralph, well, wrecks an attempts to provide a challenge for Vanellope, who at this point can win Sugar Rush races blindfolded.

There, they enter the world of pure consumer domination — one that we know very well while our heroes discover a New World. In this version of the Internet, Snapchat and Amazon are housed in monolithic temples while concepts of virality and ease of functionality reign. Sound familiar?
Of course, the movie knows better than to try and trick us into believing this is a true utopia, especially as it shifts its focus to the toxicity pervading the online kingdom — both of the film and our own.

For most moviegoers over the age of 14, Ralph Breaks the Internet comes across as a feature-length episode of “Black Mirror”-meets-the Disney Channel. It’s that union that makes this pixelated parable as disturbing as it is funny and memorable, even as some of its leaps towards self-awareness present a quagmire at times.

In retrospect the story functions well as an indirect spiritual successor to a recent Pixar standount, “Inside Out,” in the zany ways it personifies internal struggle to moving ends. The ease at which we can imagine the climax of Ralph Breaks the Internet taking place not in a land of ones and zeroes but rather inside someone’s brain, or someone’s thoughts reckoning with themselves, shows how much of a leap Disney took for its sequel.

Ralph Breaks the Internet — for which Phil Johnson joined forces with Rich Moore in the director’s chair — comes at the tail-end of a year that saw cinema embrace the Internet as a storytelling device, setting and antagonist in tantalizing and frightening ways. Recent months saw a crop of social media-centric fare that includes “Cam,” “Searching” and “Eighth Grade” — all of which view the Internet with a foreboding eye to disturbing impact. Disney’s offering is no different, even as a pile of sugar, spice and everything nice help to cushion the fall.

And, like its predecessor, it has material for an audience diverse in age, even as older viewers might leave the theater with much more on their mind than their younger counterparts.

Ralph Breaks the Internet, however, is a bit of a devious creation. The more it leans into an idyllic portrayal of the social media world, with its literal tweeting birds and a homogeneous population made up of slightly creepy avatar denizens, the more Johnson and Moore’s story comes off as increasingly tongue-in-cheek, considering the effects social media and titanic online corporations that feed of knowing our private information have in reality.

But the movie isn’t naïve — pop-ups ads are explicitly portrayed as the Internet’s equivalent of panhandlers, and you get the sense that this bustling metropolis wasn’t built on the backs of totally pure intentions. One of its most disturbing tricks: Hearts being used as literal currency, which we would laugh at until we remember how much YouTube stars make in real life.

Moments like these, when the film lays bare that aspects of social media saturation are beyond satire, are frequent.

Our protagonists later make the discovery for themselves, even as the story begins to trade irony for all-out absurdity. Once Vanellope breaks out in singing “A Place Called Slaughter Race” in what is essentially a “Mad Max”-meets-“Death Race” video game, all bets are off. It’s a delightful blend of the sincere and anarchic that somehow achieves legitimate authenticity . . . much like the Internet itself. A Best Original Song nomination? The argument could be made.

As Ralph and Vanellope maneuver through this version of the Internet, though, it becomes almost distractingly clear how its aesthetics are extremely of its time and place. It is so fixated on replicating every detail of the most popular online black holes that it’s hard not to think some of the visual milieu and sight gags won’t feel outdated come January. It’s hard to think the movie isn’t aware of this, which makes its balance against ultimately much more enduring themes of toxic masculinity and fear of independence a bit curious.

The film also reaches a point of sobering self-reflection on the part of Disney itself. As the plot inevitably churns towards the movie’s version of the company — a virtual Mecca representing this world’s Times Square or Hollywood Boulevard — we notice Easter eggs of every property it has swallowed. X-Wing fighters from “Star Wars” flying over a conversing Woody and Buzz is a bit nauseating unless you keep up with the Disney’s business dealings; otherwise, just confusing imagery.

The self-awareness becomes an interesting attempt on Disney’s part to modernize its foundation, when Vanellope wanders into a joint residence being shared by Disney’s most iconic princesses of decades past. Bits of the scene have been memorialized in promotion materials, and why not? It’s a major crossover event of sorts.

It’s refreshing and hilarious to see Snow White, Cinderella and company own major agency over their lives — sharply contrasting their individual stories guided by outdated social strata — but on a deeper level it feels like Disney attempting to right those historic wrongs. Whatever the primary motive — to redeem or to entertain — we can’t ignore the fact the company’s wealth, legacy, and agenda of bending space and time to own every pop culture asset it possibly can will far outlive Ralph Breaks the Internet and its box office haul.

But that ends up being only connective tissue for Vanellope’s journey in particular as she’s guided towards a changed destination as far as her character is concerned — a home she didn’t know she was seeking. What results, thanks to Ralph’s inability to accept not being her constant priority, is a thorough deconstruction of the Internet as a forum of toxicity and, on a grander scale, our tendency to limit the ambitions of those around us for our own gain — an essential barrier to overcome as we mature.

Would those lessons go over the heads of younger audiences? Probably. But it provides food for thought for older watchers perhaps not expecting Ralph Breaks the Internet to provide a teaching moment for them. As insecurities literally lay siege to this version of the Internet, in hilarious and heartbreaking fashion, those connections to our own lives can pave a way to self-reflection.

The eventual gut-punch finale is a summation of the film’s relevant bells and whistles paired with its many messages, but when considering the film’s longevity, the question of legacy also comes up. When tykes who see this movie show it to their own children, how will this version of the online domain’s aesthetics have evolved? How will our culture? While this is certainly a movie for the moment, it teeters precariously — perhaps even willingly — on representing a literal fleeting moment in an ever-changing online ecosystem. If it does, hopefully the changes are for the better. 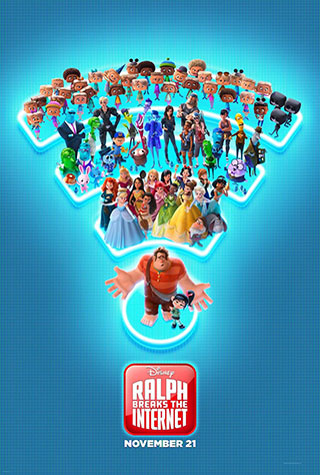