The title of Penny Lane’s film, Hail, Satan?, is presented as a question. But from the viewpoint of this documentary on the contemporary non-theistic, activist movement that is the Satanic Temple, and the everyday people who run it, it’s pretty clear-cut — perhaps to the point of ironic confirmation, more likely to the point of semi-existential shock — who can or can’t legitimately call themselves a Satanist. At least by the temple’s definition.

The inquiry is much more affirming than you’d probably expect, and after just a few minutes you realize it would generate more rigorous self-reflection to ask yourself something along the lines of: “Do I want to get up and make myself a sandwich right now?”

This documentary is one that invites your preconceived notions and judgments with a “WELCOME” banner and a tray of warm hors d’oeuvres, as if to say, “We’ve been waiting to have this conversation.” It subverts in form, but certainly not in function; there’s no exquisite sense of guerrilla filmmaking on display, no witness-bearing that comes by way of questionable legal or ethical means. Director Lane’s (“Nuts!”) sense of curiosity here is clearly of the purest kind — you can almost imagine her walking up to the front door of the black suburban house (spray-painted black, of course) that is the Satanic Temple’s Salem, Massachusetts HQ with one question in mind: Is this group, its motives and its ambitions anything like we would perfunctorily infer from its name?

The answer comes quickly: Most likely not. The Satanic Temple is essentially a grassroots organization advocating for a pluralistic and equal society (vitally, this group isn’t several centuries old; it was born in the early 2010s). And while the group at times conducts jarring rituals involving vile imagery and public grotesque displays, the practices are realized only as means to an end, and with intense self-awareness. It’s method acting in real time, and on an organizational level.

In reality, aside from its name, the temple is much like roughly 6,000 other nonprofits, organizations and movements in existence. But that’s the idea.

One of the points made early on by Lucien Greaves, the organization’s spokesperson and a de-facto focal point of the documentary’s eye, is how easy it is to play the mainstream media, particularly that of the Fox News variety. It’s a matter-of-fact statement that serves as the documentary’s thesis.

Greaves might be the most straightforwardly unambiguous character — real or not — you see in a movie this year, and part of what makes it tough to look away from what Hail, Satan? is showing or deny what Greaves is preaching is in how the elite treats that straightforwardness as salacious deviousness. Personalities like Megyn Kelly and Tucker Carlson interview him with a look of of utter confusion and underlying contempt for anyone who would dare associate themselves with the devil in any form.

It’s all for show by the networks, of course. Incredulousness for ratings. But Hail, Satan?,
injected with a tone we’d more readily associate with images of dogs learning to jump through hoops, shows that two can play at that game. Fox News wouldn’t even have provided Greaves with a platform had he not explicitly associated himself with what we’re taught to believe is the bane of all evil, imaginary or not. Lane depicts the clarity of the Satanic Temple with candidness that is both responsible and totally ironic, and seeing how Greaves plays the news media — here proved to be, not entirely inaccurately, the foundation of a deeply hypocritical society — like a fiddle is amusing and sigh-inducing in equal measure. It’s a looney tune of a societal caricature with major implications.

There’s another idea to be offered by Lane, one not revolutionary so much as a reminder, that too many of us are unable (or, perhaps more dangerously, fundamentally unwilling) to reconcile with anything that doesn’t align with our worldview, let alone hear them out. Active listening and conversation has gone from being a golden rule of life to something first-graders are better at than the Twitter-incapacitated legion.

Right from the jump, Hail, Satan? sets out to challenge whatever associations we’ve implicitly made about a group that proudly calls itself as the Satanic Temple. It starts not in a red-tinged dungeon with cloaked figures chanting under their breath and torches in hand, but in a sun-bathed living room as a man of average build in plainclothes makes a call to inquire about scheduling space for a rally outside the Florida state capital.

“Who’s asking?” we can imagine the voice at the other end of the line asking.

“The Satanic Temple,” the man responds, then confirms, with a much sincerity as someone confirming the date for an oil change.

The rally, supporting gubernatorial candidate Rick Scott, is held as local journalists on hand try to debunk the event as satirical or a prank, because surely it must be. Why else would the speaker at the podium be wearing horns that look like they came from the Halloween store?

It’s a comical way to begin a movie — a carnival-esque tune underscores it all — that would reek of absurdity if you didn’t immediately get the sense that the Satanic Temple members present weren’t there with intentions that were to be taken absolutely seriously. But would the cameras be on hand if the group was named, say, “Millennials for Rick Scott”?

There’s a universality to the group’s rhetoric, an attitude of 21st-century patriotism that, as we go on to see, is only unwittingly magnified by detractors (mostly belonging to the evangelical right) armed to their Bible-belt teeth with naïve insults. The irony — Hail, Satan? bursts with it — is that they’re only further proving the Satanic Temple’s point the more they try to suppress it. This is a tug-of-war between ideologies — activity versus passivity, straying outside the herd versus blind navigation of life’s rocky terrain. And despite its anecdotes and personality clashes playing out how you might expect, it’s nonetheless starkly eye-opening to see opponents of the temple repeatedly shooting themselves in the foot by trying to justify censoring its views.

It isn’t clear how long Lane is following the group in Hail, Satan?; it could be a few months, it could be a few years. But going from primarily the floating heads of Greaves and a steeped-in-anonymous-shadow Satanic Temple founder to several diverse newcomers is a surprising sight until you realize that these Americans of different skin colors, genders and sexual orientations are most likely just like you and me — they advocate for independent thought and freedom of speech.

Their seven tenants read like a modernized version of the Ten Commandments. They seek to fight back against a domineering societal structure influenced by a single domineering religion, despite the insistence of politicians that anyone can practice whatever religion they choose to practice. They hold after-school groups for elementary-aged kids teaching their ways, and rallies shouting their demands.

The only difference is they’re doing so “in the same of Satan” (the group would install those quotation marks, too), using that damned fiend as a counterweight to the explicit and implicit presence in society of a God figure they can’t empathize. The movie’s string of anecdotes and glimpses into the growth of the temple’s agenda are through-lined by a symbolic and specific journey to that effect: The erection of a statue of the goat-headed, bare-chested Baphomet alongside a monument to the Ten Commandments on Arkansas government grounds.

If you can imagine a sight, and begin to think on the reconciliation of the societally-imposed absurdity of that image with what the Satanic Temple is trying to say — and if you’re the least bit open-minded, you will —  then Hail, Satan? has proven to be an accomplishment of documentary filmmaking.

With deliberate astuteness and consideration in choosing certain shots, musical cues and pop culture references, Lane is clever about her artistic liberties to show how the hypocrites really are when insults and face-value judgments are thrown the temple’s way, and towards the most comparably sensible of people. It’s never really at risk of repeating the same arguments, if only because the contrast between her film’s jovial spirit and the subject matter at hand never rusts over, and despite the mission continuing ever onward for Greaves and the temple, Hail, Satan? concludes on an absolute hell of a yin-yang that Lane handles with such confidence that even a steadfast institution like Christianity feels like it may have met its match, if only for a day. 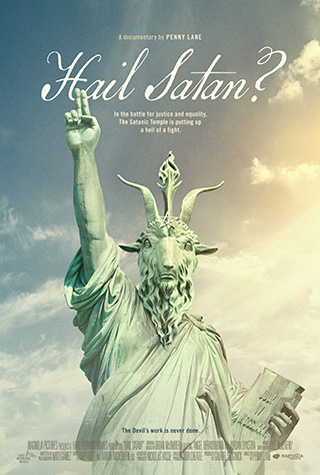