The documentary genre has experienced a bit of a resurgence in 2018 and capitalizing on that, Netflix is swooping in at the start of the year with another original deep-dive of their own, this one concentrated on the events leading up to, making up and resulting from 2017’s Fyre Festival fiasco.

And like the organizers of the now-infamous, titular luxury music festival in the days leading up to their tropical oblivion, Fyre has a lot of things on its mind.

You’re most likely familiar with the story — a 20-something entrepreneur and Ja Rule collaborate to put on the party of the decade to disastrous ends — and director Chris Smith (“The Pool”) knows it. Fyre begins with the assurance that if you clicked “Watch Now,” it’s not because you’re unfamiliar with the greatest party that never happened, as reads the film’s tagline (and world’s most concise obituary). It’s because we can’t wait to revel in watching a disaster unfold.

And unfold it does, in what is a story of superlatives, the kind of narrative aesthetic that exists as its own advertising campaign: Sky-high sums of money, the world’s most sought-after models, proclamations of “first time ever” and “never again.” It’s a party documentary if there ever was one, where the fun of watching is amplified with friends and the twisted ecstasy of sharing in an increasing sense of disbelief.

But Fyre also tests the waters beyond the admittedly shallow hook that makes the Fyre Festival such easy pickings as subject matter for a documentary. Its most enticing moments are when the chronology of events gives way to more substantive ruminations of how this could have only ever happened in our cynical world of online fantasy and influencer culture.

Smith doesn’t waste time laying out the order of events. Before you can say “cheese sandwich” he runs through the CliffsNotes version of who Billy McFarland is, how he met Ja Rule, when their plans for the festival were sparked and where their ambitions lay. It’s all presented in a familiar blend of floating head interviews (a Vice journalist, music festival consultant and Fyre employees are among those providing testimony), cheap B-roll and intriguing footage from the behind the scenes of the doomed-from-the-start collaboration.

For as much as Smith does to establish a punchy pace, his film feels a bit unsure of its attitude at first. In educating about an event where the worst implications — at least at the film’s start — are manifested in false advertising and unsavory conditions by festival guests, Fyre sometimes borders on feeling downright morbid. It’s off-putting and out of place, but the documentary becomes more confident with its tone the more it chugs along.

Even then it feels like Smith is never quite sure what to think about the festival’s guests/victims in an epoch when much worse tragedies are being documented. Interviews (of which McFarland himself did not take part) provide much of the emotional backbone to Fyre — former employees question why they didn’t intervene sooner, organizers provide awkward “now-I-know-better” smiles and locals of the island where the festival was eventually held (the real victims) rightly channel their anger at McFarland, who becomes a ghost as soon as things go south, at least publicly so.

At points you can almost feel Smith and his crew wagging their fingers like disapproving parents. At others they’re digging for some deeper implications of the festival’s outcome — some of which are still gestating — and at others still they’re genuinely curious about what the festival that never happened symbolizes in a world where so much fictitious glamour pervades our online feeds.

McFarland is the fascinating enigma that remains at the nucleus. He makes for a fascinating persona, one who you can trust always has his mind several steps ahead. Even early on, though, you catch hints that an omnipresent sense of entitlement will be his downfall.

“Everybody picks up on the second ring,” he utters to an employee at some point, though it comes across more as assurance directed at himself. Other similar, subtle details in Fyre help to shade in the portrait that is his ego, and by the end he becomes a caricature we get the uneasy sense others of his generation idolize: Conniving, sly and perpetually go-for-broke until he runs out of ways to assure those around him that “I’ll handle it.”

Still, of course, the moment of reckoning for the festival’s hundreds of bikini-clad, Ray Ban-wearing attendees approaches ever closer. We’d discovered, in real-time with the rest of the world, the Fyre Festival for what it truly was thanks to the instantaneity of the Internet, sharing clips of guests finding soaked mattresses after being bussed into what resembled a military encampment.

Nonetheless, the presentation of the debacle itself is as reliable a cinematic drug as we could’ve hoped for. Smith succeeds at building anticipation to the point where it feels like we’re peeking out at the guests from behind a corner, trying not to blow our cover.

Amid the breakdown (an understatement, but there’s only so many words for “disaster”) of the event, the ambitions of its organizers and the fantasies of its ill-fated guests, Fyre intercuts with more serious white-collar matters, the type of consequences that didn’t get thousands of retweets in the spring of 2017. Lawsuits are filed and supersized egos whose Fyre ambitions represented an attempt to skydive before they could grow even larger.

Ethics, predictably enough, enter the equation. But it’s the documentary’s philosophical inquiries that, limited as they are, provide the tastiest food for thought.

In that sense Fyre also serves as a warning, not just to protect ourselves from false prophets like McFarland, but also to realize that the unlimited potential of messaging on social media shouldn’t be taken as an invitation to tap it (there’s a sea of literature, articles, TED talks, studio films, documentary films, even other Netflix films that explore the mythos of influencers and the characteristically damaging nature of social media, many of them better than this attempt.)

As mentioned, Fyre has many things on its mind, however, and those ideas become cliffhangers rather than mapped territory. Would it have worked better as a documentary miniseries? With so many angles to touch on — Billy’s Zuckerberg-esque ego, the disaster itself, the local community’s dissatisfaction, the social media reaction, news media coverage, courtroom dramatics — it’s tough to think not.

But Smith and Netflix get points for assuring us that even when we’re positive that certain incidents have reached peak bizarreness, they nearly always do. 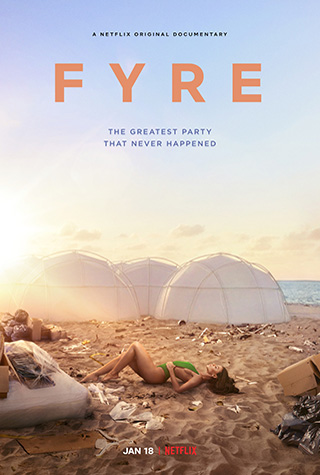