It would be an understatement to say that I have been merely looking forward to Glass. Its arrival was all I could think about since it was announced after the release of “Split,” a movie that came out three years ago. Having watched “Unbreakable” all those years ago, I felt my mind break a little when it was revealed that “Split” takes place in the same universe, and that M. Night Shyamalan, the crafty director that we loved from “The Sixth Sense,” had something twisted in store for us. “Unbreakable” was a fantastic movie, “Split” was all kinds of mind boggling, so it made sense that Glass would be the cherry on top of the cake. Unfortunately, it is not quite pop your cherry quality. Don’t mistake me, it is not a bad movie, it’s just not as good as its predecessors.

What the movie does have going for it is top notch acting. James McAvoy (“X-Men: Apocalypse”) puts on an acting masterclass reprising his role as Kevin Wendell Crumb, switching between 24 distinct personalities with surprising ease. The tone of his voice, his facial expressions and mannerisms, as well as his physicality change making for some very interesting (Patricia, a sophisticated woman), cute (Hedwig, a nine-year-old boy) and disturbing (“The Beast”) characterizations.

But McAvoy’s dominance in the film, while magnetic to watch, also creates an unevenness in a movie that was supposed to be about balance between the three titular characters. Yes there is a connection between him and the other two, but all three narratives just don’t come together quite right. Despite the movie being named for Elijah Glass (Samuel L. Jackson, “Kong: Skull Island”), he isn’t really in the movie all that much. When he is (mostly for the last act of the movie), Jackson delivers a compelling portrayal of a silent figure that commands attention. He always seems to be on the verge of something, giving the impression that his mind is working furiously even though his body is not. Bruce Willis (“Red 2”) slips back into his “Unbreakable” persona, David Dunn, and delivers an emotional performance. His interactions with Spencer Treat Clark (“Much Ado About Nothing”), who plays his son Joseph, was nice to watch — especially when the relationship is bolstered by spliced-in moments between the two from the first film.

The weak link in a stellar cast is Sarah Paulson (“Ocean’s 8”) as Dr. Ellie Staple. This is not her fault, however; her character is just extremely sterile and devoid of a proper character arc. Yes she has a purpose (to convince the trio in her care they possess no extraordinary abilities and are just victims of delusion), but it just doesn’t make any sense. Why would “The Horde” (Crumb’s personalities combined) doubt their capabilities when they have witnessed the power of “The Beast”? The fact that both David and his son start to doubt his abilities is even more laughable given the many years he has spent displaying them as a crime fighter known as “The Overseer.” Anya Taylor-Joy (“The Witch”), returning as the lone survivor from “Split,” doesn’t, unfortunately, add much to the dialogue either.

And what would a M. Night Shyamalan film be without a twist? For Glass, we even get three! Dr. Staple, flawed as she may be, enjoys a sizable role in one of them, but the pay-off isn’t there, especially because of how expository the storytelling becomes. Shyamalan shoves this twist in our face, with the good doctor having to explain to us what it all means. I won’t disclose the nature of the other two — I’ll only state that they land better than the first one mentioned, although they too are lacking the satisfaction I got in the revelations from the previous movies.

The soundscape is chilling and effective in parts; I am fond of the color palette the film uses, and the symbolism it wields. The fight choreography and framing of certain scenes could use some work, though. “The Beast” has this particular move where he grabs someone around the chest and squeezes. This is a great show of strength, yet it’s presentation makes it look like he is merely hugging whomever he is engaging with. I also wish we got to witness more of the extraordinary abilities of David and “The Beast,” and not just their ability to bend metal bars or flip cars.

To conclude, Glass, while a fitting end to the series, suffers from being overly broad. With it, Shyamalan wants to subvert the expectations of typical superhero narratives by showing us a realistic scenario if super heroes/villains existed, but at the same time he wants to show off its comic book roots whenever possible. And the underlying message to urge viewers to see the extraordinary in our existence while highlighting that healing and change is possible gets lost in the shuffle. The film feels like a guest who has overstayed his welcome and starts to tell another story when asked to leave. It feels much like Shyamalan’s cameo in the movie — a gargantuan effort, but one that is kind of awkward. 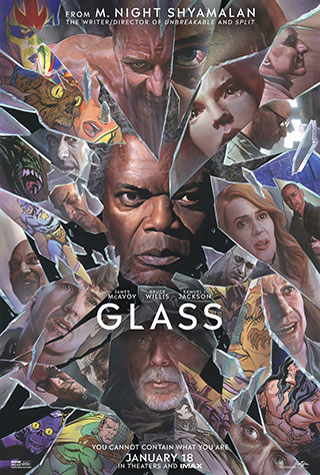