Prior to Kong: Skull Island, there have been at least a half dozen feature films based on the monstrous King Kong character, including the original 1933 classic, 1962’s campy “King Kong vs. Godzilla,” the Dino De Laurentiis 1976 budget-breaker and Peter Jackson’s overlong and ambitious 2005 edition, among others.

Despite the various incarnations, the plot is basically the same: Kong (conceived and created by American filmmaker Merian C. Cooper and using the name given to him by the inhabitants of “Skull Island” in the Indian Ocean) lives among other over-sized animals such as plesiosaurs, pterosaurs, other dinosaurs and huge insects. Americans capture Kong and take him to New York City to be exhibited as the “Eighth Wonder of the World.” Kong escapes and climbs the Empire State Building (or other large building), only to fall from the skyscraper after being attacked by airplanes with guns.

Also, in previous episodes, the great ape does not debut until well into the first act, but in this newest version, Kong: Skull Island, directed by (Jordan Vogt-Roberts, “The Kings of Summer”), the titular beast makes his appearance almost immediately as downed American and Japanese pilots discover him after crash landing on the island in 1944. We then fast-forward to 1973 (this is the author’s favorite year, by the way) when a covert government agency (MONARCH), headed by Bill Randa (John Goodman, “10 Cloverfield Lane”) and Houston Brooks (Corey Hawkins, “Straight Outta Compton”), petitions the United States Senate for a scientific expedition to the venue.

Commissioning a military escort from Vietnam (where by this time the war is coming to a close), brings a macho dimension to the picture, as well. In charge of this group is the perpetually angry Col. Preston Packard (played by the perpetually angry Samuel L. Jackson, “The Hateful Eight”), while suave British intelligence agent James Conrad (Tom Hiddleston, “High-Rise,” but better known as the best villain, “Loki,” in the Marvel universe) and pinko war photographer Mason Weaver (Academy Award winner Brie Larson, “Room”) tag along.

Flying into the the fog and storm-shrouded island in a line of Bell UH-1 helicopters (“Hueys”) reminiscent of “Apocalypse Now,” the squadron discovers to their chagrin that Kong is indeed real and he’s pretty pissed, swatting the intruding machines about like so many flies at a picnic. Stunned and stranded, the group is scattered to different areas of the island, Packard and the soldiers on one side and Conrad, Weaver and the scientists on the other.

There are a few stragglers in between, however, such as Capt. Jack Chapman (Toby Kebbell, “Gold”), who discover, along with the rest, that Kong isn’t the ONLY terror here. Yes, huge insects (including a terrifying spider sequence), vicious reptile-like birds, deadly lizard “skullwalkers,” and — inexplicably — large, lumbering water buffalo. The Conrad-led troupe then discovers Lt. Hank Marlow (John C. Reilly, “The Lobster”), a now aged World War II pilot mentioned from the film’s beginning.

Marlow has been living with a tribe of silent members who were chased inside a fenced village for obvious reasons, but when Kong came along, he acted as a balance, wiping out those pesky “skullwalkers” and keeping the peace. Unfortunately, the crazed Packard is intent on revenge against the simian (since, you know, Kong inadvertently killed a lot of his troops and all). He loads up on explosives and 50-caliber machine guns, et al.) and attempts to kill the beast, which would in turn, wipe out the humans on the island. So, it comes down to these two bodies fighting over Kong, while the mighty ape is fighting the “big one,” or the mother of all “skullcrawlers.”

Who wins? Well, you’ll have to find the answer to that question out for yourselves, but rest assured, if it’s empty calories and non-nutritional eye candy, lizards devouring humans, ear-splitting high-impact explosions and the great Kong establishing his territory, then Kong: Skull Island is definitely for you. Do not expect the poetry of the first, the sheer silliness of the 1976 offering or even the layered love story of the 2005 version, but for sheer action and a decent soundtrack (it’s 1973, for crying out loud, so tunes like “Bad Moon Rising,” “Paranoid,” “Time Has Come Today,” “White Rabbit” and “Long Cool Woman (In A Black Dress),” among others, are belted out almost constantly), it’s certainly not a terrible effort.

The special effects are also quite well done (thanks to Chris Brenczewski, “Jurassic World”) and the monsters whipped up by the Industrial Light and Magic folks are easily the best part of this motion picture. Human characters are not as impressive with only Reilly and Jackson (who does gets to shout his catch phrase “motherf**ker!” by the way) getting the best of the lines written by Dan Gilroy, Max Borenstein and Derek Connolly.

It’s not a planet of the ape, but Kong: Skull Island is worth enough fun and monkey business to spend a few hours on a Saturday with the gorilla your dreams (sorry about all of that) or at least until “Beauty and the Beast” is released. 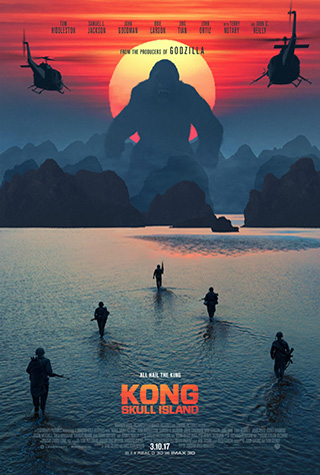