Living in captivity is not so when captivity is everything you know. No cell can be bigger than the one constituting our environment, and when our whole environment consists of a small room, bigger than an average houseroom but smaller than a bachelor apartment, a shedding that has seen your birth and growth, then the world is your cell, and what you see beyond the skylight is the outer space.

Room is home. Home is room. But home was never room enough for the two of us. These are the words you can almost hear from a sleepy Joy (Brie Larson, “Trainwreck”) who, at that point, is not Joy yet but rather Ma — Jack’s mom. Room is mom.

Jack (Jacob Tremblay, “Before I Wake”) has just turned five and is eager to wake his Ma who’ll cover him with his happy birthday’s rights. Jack was birthed in that same room in which Joy was locked when she was captured seven years from now. The father is not only Joy’s captor, but also her rapist and raptor. Old Nick (Sean Bridgers, “Witless Protection”), which is how Ma calls Pa and how Jack knows him (your typical kind of abusive asshole), breaks in from time to time (though always in time and never without Joy knowing in advance) to provide his “family” with goods that Jack has been told come from a magic place out in space . . . “like TV” . . . and then proceeds to masturbate inside “his” woman while his child (who he has never seen) sleeps in a cozy bed his Ma has fetched inside their wardrobe.

For years all they have done, Jack and Joy, has been to roam and roam. Roamed and roamed they have at the rims of the marooned room. All walls. No doors. One window: A skylight. For Jack everything, the whole world, comes together in that shaky shedding. He has, however, a very well-formed concept of inside and outside, which though a little limited is never confined, for he very well understands what it is to be like in the world. A doorless room. All inside. All latitude. An infinite form of confinement in an infinite form of reinvention. Sole space. Pure possibility.

Problems start, nonetheless, when Old Nick appears unable to even provide for them. He slips to his hostage, the mother of his child, that he has been laid off his job for several months. There’s not even that for Joy to keep inside her Cerberus’ rule. When winter shows up as ice and snow populate their window and the power’s cut due to Old Nick’s undue debts, Joy becomes aware that not even that kind of survival can be guaranteed for her and, much more importantly, for Jack. It is then that despair disembarks upon Ma’s wits — after all, desperation is the mother of all breakthroughs. It is then that she decides to risk her life and her son’s in an elaborate plan to get them (first him, then her) out of there. And it is when they’re out (this is not a spoiler; you can even watch it in the trailer) that things become more and more messy — when room’s no more.

Lenny Abrahamson’s (“Frank”) latest film, Room, is a profound exploration into the nature of captivity: For the captured, for the captor and, more importantly, for the person who has been born therein. What does captivity mean for this person? Abrahamson dissects the implications for the three of them. For the captor, it means power at the midst of a powerless life. For the captured, it means the privation of a life she will never have. And for the natural-born-captive, it means plainly and simply home. During the first part of the film, the person who is at an abnormal situation is Jack, who’s not only our narrator but also the focus of Act I. Abrahamson’s shaky camera for the viewpoint of a curious child morphs into more orthodox shots in Act II, when it is Joy who becomes the focus of attention, even though she’s a focus in absentia. It is through Jack’s deep longing for his absent mother that we get to understand how much he gets to miss the stability that room brought to him, as his mother was there, literally, all the time — and a good mother she was: Lovingly devoted to her child, even in the worst of circumstances.

It is when she gets out and comes back to her former life with her mother (Joan Allen, “A Good Marriage”) that she finds out that she’s a woman as much as she is a Ma, but that such part of her is completely missing and it’s nowhere to be found. Her father (William H. Macy, “The Sessions,” again excelling as a model mediocre, stealing scenes . . . the couple he’s in) doesn’t make things easier. Unable to accept the nature of his daughter’s child, he leaves her (once she asks him out) and we understand why Grandma divorced him to marry a way more stable, way more mature, way more of a man, Leo (Tom McCamus, “The Samaritan”), who’s patient enough to become the best masculine figure Jack could ever have. While Joy has to readapt to the world, Jack only needs to understand that it is bigger than the domains of his own household — isn’t this a little bit the story of each and every child?

For Joy, the world has failed her miserably. As she compares herself to Alice while in the exact opposite of Wonderland, trapped in the rabbit hole or, even perhaps, trapped in the aftermath of what would have happened had she opted to stay the night at the Mad Hatter’s flat. Dispossessed of her youth, she resents having come out to a world that moved without her — her journey back home is plagued with overwhelming wrath. This she kept inside till she found that, before a mother, she was once a young woman, and after that, a woman sucked dry.

Jack, on the other hand, finds an easier transition from trusting no one but his mom, from talking to no one but his mom, to the branched out relationships that are always lingering at the vicinities of the world. What’s the world in this context? As Jack very aptly describes it, it’s a place where there are doors upon doors, and insides upon insides, all accumulating, “behind a door, there’s another door and another inside.” Truly being in the world, truly dwelling it, is being aware that any sense of outside is but a machinated artifice.

Thus having from the outset no sense of outside turns out to be an asset for Jack, who quickly moves to accept his time in captivity and, furthermore, to accept his future in “freedom” — whatever limited he intuits it is and will be, for the world is only as big as the world is. And such extraordinary adaptation, such sense of acceptance, continuously leaves the viewer wondering how something so beautiful could have originated from such a horrific act. Ma knows it well; her child is one of a kind, will always be — whichever the seed was, the soil was more than prepared to nourish only the best it could provide. The rest . . . is in the fluids of that Old Nick that is not big enough to even make it to Act II as a pending threat. We know he’s too much of a coward. We learned that from the very start.

And between Joy and Jack, between Larson and Tremblay, Abrahamson has provided the best ground for his actors to thrive. Larson, who has already shown she can shine with a light of her own in films like Destin Daniel Cretton’s remarkable “Short Term 12,” delivers here what is perhaps her best performance to date, a memorable rendition to motherhood and an unforgettable depiction of a broken womanhood. Tremblay is just too good to describe. He’s just a prodigy and his instincts are all the more prodigious. From his body to his face to his voiceovers, every bit of his presence lightens the screen with an almost cherubic glow. And there is more than a little of Abrahamson’s hand in this soundness. He has already demonstrated what a good director he is when working with his cast. Both intimacy and indoors are his business. This intimacy transpires as well in his work with Emma Donoghue, who adapted her seemingly unadaptable novel. Despite some extra shakiness in his camera, despite some clumsiness when filming some action-oriented scenes, despite deploying some sappy resources here and there (i.e., slow motion), Abrahamson is able to create a film that is filled with grace and that is convincingly conveyed through the eyes of a pure boy. It is to his merit that, as Jack, we never feel trapped in a room, that, as a matter of fact, we never realized how small it really is till the point when we come back.

William Wordsworth wrote that the child is the father of the man. In the case of Room, Jack is his mother’s savior — more than once: He almost bore her to the world again. It’s true that her captor has sucked all joy from Ma . . . but he has left her full of Jack. Joyless yet Jackfull, Joy is blessed with a child who is able to instantly grasp what in most of us takes long strives to even get into sight: The meaning of circularity, the production of difference within the confines of sameness. Jack has thus been blessed with the gift of gratitude. And so Jack knows when and how he must say goodbye. So, goodbye word, goodbye page, goodbye review, goodbye room. Thank you Room. 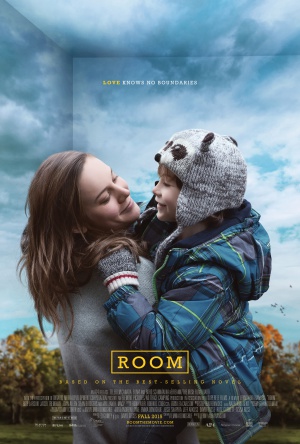