Making a movie that feels both realistic and satisfyingly entertaining is not an easy thing to do. In fact, the notion of producing a film that feels entirely true to life is almost antithetical to the cinematic framework. Life is often uncomfortable, random, ambiguous and inconsequential — traits that could understandably be seen as detriments to a movie plot. And yet, this is the avenue that C. Fraser Press embarks upon in Theresa Is a Mother — a movie that she wrote, co-directed (with husband Darren) and starred in as the titular character.

We follow the story of Theresa McDermott — a down-on-her-luck single mother of three attempting to balance her home life with her seemingly misguided ambitions of being a singer/songwriter. But after being evicted from their apartment in the city, the family is forced to pack up their things and head back to Theresa’s rural home town and stay with her estranged parents. Old scars are quickly reopened in the new arrangements, leaving the family with a lot to learn about growing up and accepting one another for who they really are.

With such a sincere and universal plot, there is certainly something to admire about the set-up of Theresa Is a Mother. Press in particular embodies the persona of the flawed, yet well-intentioned Theresa, and delivers a stand-out performance. But unavoidably, there are just as many things that, perhaps debatably, seem to be a bit off about the film.

While most of the actors fill their roles with grace and are easy to sympathize with throughout the story, it’s not quite so easy to go along with them in their more comedic moments. In fact, most scenes of intended comedy tend either to come across as excessively awkward or to simply fall flat. And while awkward comedy does indeed work in many cases, within this context, it’s mainly uncomfortable, and there are few genuine laughs to be had here.

This lack of levity may be largely due to the overriding tone of the movie. The story of Theresa Is a Mother appears to be mainly concerned with people who have been stunted in their emotional growth in one way or another. Whether it be Theresa who is still chasing a dream of being a punk singer/songwriter with only a crummy acoustic guitar and a not-so-eloquent repertoire, her parents (Edie McClurg and Richard Poe) who find it difficult to accept their daughter for the woman she turned out to be, or simply one of the peripheral characters whose achievements seemingly reach no farther than finding a steady job at a restaurant in the town they grew up in.

And while these traits and character types do certainly lend the people in this film a definite realism, it also makes most of the film unavoidably feel rather depressing without much dramatic purpose. Thus, when we are given a comedic beat in a scene, the moment almost doesn’t register as one of humor because of the mood that taints the remainder of the running time.

It must be said, however, Theresa Is a Mother is in many ways a well-made and well-acted film that does deserve a good deal of praise for portraying a relatable story with an undeniable sense of realism. The pity is, with a lack of focus and a tone that is often a detriment to itself, the final product is one that, while admirable, is simply not very entertaining. 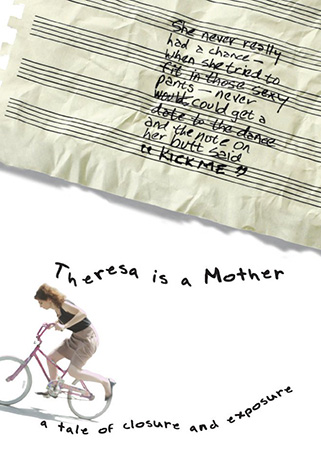