The Fare starts as your standard “Groundhog Day” fare (pun entirely intended). Every time cab driver Harris (Gino Anthony Pesi, “42”) hits his lever, he is thrust into another 20-minute time loop. Every time, he picks up Penny (Brinna Kelly, “The Midnight Man”), drives awhile, and then she vanishes and it begins again.

What in the name of Bill Murray is going on? First, the reliable pleasure of the time-loop narrative: The fun of recognizing micro events and utterances that define that window of time; the way the filmmaker creates this repetitious tapestry, and how their protagonist reacts and learns. Watching this realization dawn on a character never gets old.

Relatively recent high-profile hits like “Source Code” and “Happy Death Day” have successfully shoehorned the formula into new genres — sci-fi and slasher respectively. Now sophomore director D.C. Hamilton and writer-star Kelly are attempting to do the same with what one could label an “existential drama.” Something closer to the mind-bending intentions of “Donnie Darko,” then, only warmer and more romantic.

The Fare mixes up the formula in various ways, and not always to its benefit. The setting might be simple — a taxicab on a straight road — but the rules are complex. For example, it seems, at first, that Harris has no memory of the time loops, yet Penny does. And as we enter the third act of the film we are met by a tsunami of new information. It’s more complicated than mind-blowing; a torrent of exposition which might have been condensed to a single word. It’s a word that changes Harris’ role, and once he is reframed the film enters fresher pastures.

Kelly is a better writer than she is an actor, but there is good chemistry between the leads and the writing usually lands on the right side of the earnest/maudlin divide. The intimacy of the taxi cab is ripe for dialogue-based courting (remember that wonderful opening meet-deep from Michael Mann’s “Collateral”?), and while Harris and Penny aren’t exactly giving Jesse and Celine (“The Before Trilogy”) a run for their money, their inane flirtation does feel warm and real.

It’s when Kelly and Hamilton stick to the mechanics of their conceit that the film works best. There’s an amusing diversion when Harris tries to drive off-road, only to be commanded by a booming voice to “Turn back!” like the voice of God from “Monty Python and the Holy Grail.” It’s silly but also points to the film’s main theme: Appreciate the time you have, with whom you share it, rather than wrestling the hand of fate.

There are some flashback scenes later which make us wish we’d never left the cab, including a cheesy romance montage which turned my mind to that scene from “The Naked Gun” with the Peter Noone music. But for the most part this is a serious-minded and smart little thriller, which skillfully sidesteps its essential absurdity. Far from high concept, it’s aligned with the conceptually out-there work of Mike Cahill (“Another Earth,” “I Origins,” et al.). The Fare might take the meandering way around (despite its brief runtime), but it does eventually reach its destination in the form of a moving finale.

The Fare shoots for timeless romance and overreaches — a simpler fable would have edged it toward greatness — but its ambition is commendable. There’s plenty here to suggest a thoughtful and intelligent filmmaking team. Even if it doesn’t quite take the most direct route, there are ample interesting ideas to fill its 82 minutes, not to mention the minds of its audience. 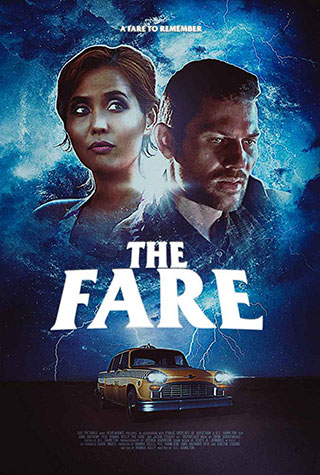