Remember the opening of John Carpenter’s “The Fog”? A salty old man tells a spooky story beside a campfire, perfectly setting the folkloric tone, and then Carpenter introduces his sinisterly serene seaside town like it’s a sleeping, snoring creature . . .

Well, do not expect such magical mood-building with Mary, a damp fishnet of a film from Michael Goi (“American Horror Story” TV series). There’s a ye olde backstory here, but no conjuring of dread. No sense of purpose and no sense of place. Perhaps it’s the limited budget, but a dearth of exterior shots negates any suggestion of isolation of being adrift. The titular boat could just as well be a haunted house on dry land.

We first meet Sarah (Emily Mortimer, “Phil”) in a police interview room. She just wants to see her daughters, but first the cops want to know what happened on her family’s yacht. Sarah speaks of some tragedy having befallen them, out on the ocean.

We return to the scene before the crime. Sarah’s husband, David (Gary Oldman, “Darkest Hour”), admires the vessel named Mary to such a degree that he makes an impulse purchase. Sarah is convinced by her husband’s passion more than his logic. She and their two daughters (Chloe Perrin, “The Diabolical” and Stefanie Scott, “Insidious: The Last Key”) are soon on board, both mentally and literally.

Once the Mary ventures deeper into the Atlantic, the nightmares begin. Sarah sees horrifying visions. The youngest daughter suddenly develops a thousand-yard stare. The elder’s boyfriend (Owen Teague, “It”) goes downright loopy. The contrivances of the script ensure that no one communicates plausibly or effectively with one another, ratcheting tensions between the extended family members further. The influence of the haunted masthead — Mary herself — is felt everywhere, and it threatens to kill them all.

Except the masthead’s purpose is unclear. Mary is a muddled mess of a horror, never settling on what we’re supposed to be afraid of. This could be because greater clarity of evil would render the film even more predictable than it already is. I mean, here’s a story about a witch’s curse, and the only adult survivor of the tragedy at sea is the mother . . . so make of that what you will.

There’s an intriguing early teaser scare where a character opens a cupboard and a spider-like monster leaps out. Soon after, the new owners of the fateful vessel make repeated comments about the number of spiders on board. Surely, I thought, there must be some nameless, multi-legged horror skulking in the hold? Alas, there isn’t another creature featured at all.

The film’s shroud of mystery is a clunky weave. It’s like there was a coherent yet far too predictable original cut, and the filmmakers simply went through and deleted ten minutes of footage. This might explain why much of the editing feels jumpy — characters will be in the throes of madness one moment, and then serene and simpering the next, with zero transition.

Speaking of editing, the shift from the prologue is bizarre. The film opens with a traumatized Sarah in a police interview room, relating her story about abandoning the boat. The scene then switches to the abandoned Mary being boarded by the coastguard. Then, suddenly, the boat is in a harbor, being sold to David, and we must surmise that we’re in flashback mode. The basic chronology is needlessly confusing.

By making the onboard threat overtly supernatural, Goi negates the possibility of the slow-burn psychological drama we’ve seen in the likes of “Dead Calm.” Indeed, after a promising opening act which points to a corrosive indiscretion between Sarah and David, once out on the waves the relationship lurches instantly to 11. As is so often the case with half-baked scripts, the initial character sketching is fine, but it amounts to nothing. This is a film with ideas (albeit largely those of others) and characters but no theme to cohere them.

Mary plunders cliché and unashamedly lifts from classic horror. We get deafening door banging; newspaper cuttings with grainy photos portraying glum-faced families; creepy child drawings, etched in charcoal; and a crooked-limbed woman with lank black hair. Then there are the direct references: A match illuminating a creepy face in the dark, just like “The Conjuring”; the grubby trail of footprints from “Pet Sematary”; and an entire scene from “The Shining,” where a madman is locked in cupboard, boasts about sabotaging the comms and the fuel, and is then released by a ghost. As for that last one — let’s just say, Manuel Garcia-Rulfo (“Sicario: Day of the Soldado”) is no Jack Nicholson.

The focus is on Sarah and David, and here we have a couple of pay-the-bills performances from Mortimer and Oldman. Mortimer’s accent is as choppy as the Atlantic, and neither convinces as boatmen. Oldman excels in urban tough guys roles, but it seems when you put him in the sea . . . well, he’s all at sea. He resorts all too easily to his vibrating rage schtick — it’s like watching Stansfield from “Léon” leading a school outing. Mortimer at least gets to show a modicum more range.

The film ends with a stinger that feels unearned to the point of rudeness. When filmmakers resort to retroactively altering footage we’ve already seen, it’s hard not to feel cheated. And it takes balls to sign off with an ending that virtually promises a second chapter. I think we can feel confident, and somewhat glad, that it’s a chapter that will never be written. 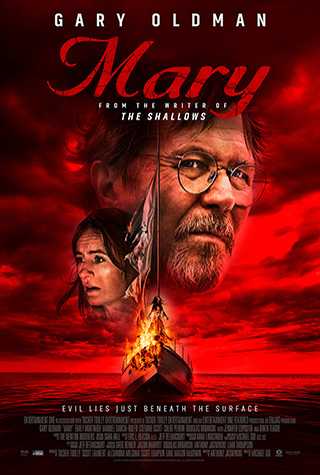