Allen Packwood, director of the Churchill Archives Centre referred to former British Prime Minister Winston Churchill as an “incredibly complex, contradictory, and larger-than-life human being.” This complexity is lost, however, in Joe Wright’s (“Pan”) Darkest Hour, a look at a crucial time in British Prime Minister Churchill’s stewardship that covers the period from May 10, 1940 until his famous speech to the House of Commons on June 4th. This was the speech in which Churchill declared that, in the fight against Nazi Germany, Britain would fight to the end and never surrender. Written by Anthony McCarten (“The Theory of Everything”), the film stars Gary Oldman (“Dawn of the Planet of the Apes”) as the confident leader who carried Britain through one of the most challenging periods in its history.

Beneath Oldman’s makeup and mannerisms, we get a sense of what Churchill was really like, but it is more of a master class in acting than a three-dimensional portrait. Churchill’s most familiar personal trademarks are ticked off: His bluster, mumbling, drinking habits, cigar smoking, soaring speeches, and buoyant sense of humor, but it feels like a compilation of his “greatest hits.” The main focus of the film, however, is not Churchill’s personal idiosyncrasies but the political conflict between those who want to negotiate with Hitler and those who prefer to fight to the end, whatever that might look like. When Prime Mister Neville Chamberlain (Ronald Pickup, “The Second Best Exotic Marigold Hotel”), who will forever be associated with the word “appeasement,” is forced to resign, no candidate besides the First Lord of the Admiralty, Winston Churchill, is acceptable to the opposition.

Those who oppose him include Chamberlain, Lord Halifax (Stephen Dillane, “Game of Thrones,” TV series), and King George VI (Ben Mendelsohn, “Rogue One: A Star Wars Story”) who see Churchill as too “hawkish” and urge him to ask Mussolini to negotiate a deal with Hitler in order to prevent an all-out invasion of Britain. Churchill, however, is convinced that making deals with Hitler will lead to the end of British independence and the film does not seriously consider other viewpoints as having any merit. While the new prime minister’s boundless optimism did much to inspire Britain, Wright also shows him to be torn by doubts. In one scene, Churchill sits alone by himself in a darkened room, suggesting a struggle with depression, as has been rumored.

By this time, Hitler has already conquered Norway, Belgium and France are near capitulation, and 300,000 British soldiers are surrounded by German forces at Dunkirk. Haunted by his part in the heavy loss of life in the World War I Battle of Gallipoli, the prime minister has to come up with a plan to save the men, but little help is offered. Cinematographer Bruno Delbonnel (“Inside Llewyn Davis”) creates an atmosphere of musty corridors and underground rooms where there is little light or air and where life or death discussions take place. In spite of the gloom, there are moments of humor. We listen in on a phone call between Churchill and Franklin D. Roosevelt where Churchill asks for help and Roosevelt tells him that he “can’t swing it” because of U.S. neutrality, suggesting that he should get horses to pull B4 bombers across the border into Canada.

Support from his acidic wife Clementine (Kristin Scott Thomas, “Only God Forgives”) and his devoted but put-upon secretary Elizabeth Layton (Lily James, “Baby Driver”) are welcome interludes, but they basically serve as a distraction and we learn little about Churchill’s personal life other than one contrived conversation with the King about his parents. While the film zeroes in on Churchill’s thought processes, embellishments to the historical record sentimentalize his achievements. At one point when he is still considering the proposal to seek negotiations, he bounces out of his car to take the Underground to Westminster. On the train, he talks to the people asking them about their attitude toward negotiating with Hitler and is buoyed to hear when they tell him to never negotiate. It is an event that never took place.

There is no doubt that Churchill was a great man who helped save the world from the Nazi barbarians and Darkest Hour makes that clear. It does not, however, present a balanced portrait, ignoring Churchill’s blemishes as if they never existed. While we can all celebrate Churchill’s courage and fierce determination, no mention is made of his lifelong dedication to British imperialism and his disdain for Gandhi and the Indian independence movement, or his virulent anti-Communism, casual anti-Semitism, and support for the Spanish dictator Franco. They were not his finest hour. 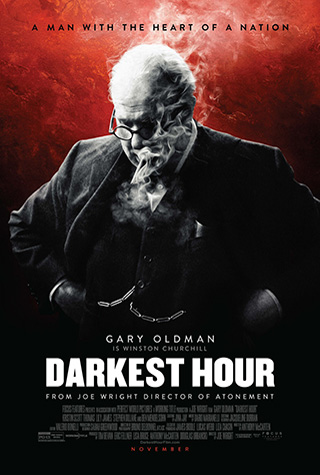