There isn’t a solitary way to absorb and dissect the various idiosyncrasies and potentials that exist within Netflix’s most expensive feature film, Bright. Director David Ayer has teamed up with screenwriter Max Landis to conjure up a world where “Lord of the Rings” wants to be a gritty police remake of “Harry Potter.” A novel premise, stellar makeup effects, and a fully committed cast isn’t enough to cut through the film’s stale characters, unexplored world and mythos, and horribly cliched screenplay.

In a world where orcs, elves and other mythical creatures coexist with humans, officer Daryl Ward (Will Smith, “Collateral Beauty”) is returning to duty after recovering from a shotgun blast to the chest. His partner Nick Jakoby (Joel Edgerton, “It Comes at Night”), the first orc police officer, is taking the brunt of the blame and scorn, often the butt of unjust rebuke from his fellow officers. After a call brings the pair of them into contact with Tikka (Lucy Fry, “Vampire Academy”), a frightened elf possessing a magic wand, the three of them become instant targets of federal agents, local corrupt cops, street gangs all after the wand’s power. However, a secret doomsday society lead by the elf Leilah (Noomi Rapace, “Prometheus”), the true owner of the wand, ups the stakes as they aim to resurrect a Cthulhu-like Dark Lord.

The opening credit sequence of Bright is well-produced and possesses an attitude that clearly outlines the social construct between the races that come to define much of the first half of the film. Alessandro Bertolazzi’s creative and believable makeup design of each creature comes hot on the heels of his Oscar win last year for “Suicide Squad,” chalking up another successful collaboration with Ayer. Andrew Menzies’ engrossing production design is without a doubt the best of his entire career, and something to be highly respected. The cast, of whom Edgerton and Happy Anderson (“Hit Men”) stand out, do admirable jobs with the material, possessing natural talents to suspend disbelief, though many moments of mannerism cheese up the movie. All of this is rounded out by David Sardy’s conventional yet understated score.

However, this is where the compliments end, as the most central elements of this film force it a part: The screenplay and the directing. Landis is no stranger to screenwriting, but has hit a proverbial wall on his screenplay which he claims was written specifically for Ayer. With the first third of the film being a rambling series of contradictory engagements before the plot finally reveals itself, the amount of screentime devoted to exploring the world is staggering considering how little is actually divulged. The elves are in charge of everything, but there are never details given as to why; a great Sauron-like battle occurred a couple thousand years ago with very little to connect it to the plot beyond a magic-driven adventure in L.A.

Hammering in a long-winded, heavy-handed approach to race relations to make “District 9” appear calmly subtle, Bright then diverts course to a stock standard stop-the-overpowered-villain story, its parable taking a backseat until it’s needed to nudge the characters from one aimless action sequence to another. This could have been somewhat more salvageable if it were not for Ayer’s equally desultory direction, resulting in nonsensical blocking, actors wandering emotionally while yelling at each other, and many scenes lacking actual segues or motivational logic.

Though I am no particular fan of Landis as a writer, there was a lot more expected of Ayer, considering his experience directing the films “Street Kings,” “End of Watch,” “Fury” and writing of “Training Day.” Say what you will about “Suicide Squad,” all of the elements at play here should have been right up Ayer’s alley to at least produce a competently enjoyable film. Thusly, Bright additionally suffers from Roman Vasyanov’s underlit cinematography meshing harshly with Michael Tronick’s blurred editing, producing a pace equivocal to cardiac arrest without the necessary adrenaline.

Moments of genuine spectacle littered with one-liners are fostered by a committed yet underutilized cast (especially Fry and Rapace), making it bittersweet. There is some serious talent at work in art direction and color design, and I want to discover more about what makes the world tick and explore the numerous socio-cultural allusions. The filmmakers wanted this to be a searing cultural critique wrapped in a fantasy world heralded by flawed-but-fearless protagonists; but its quasi-baked world, cardboard characterization, unappealing action sequences bookending long throwaway segments easily make Bright riff-fodder not worth more than a single viewing. 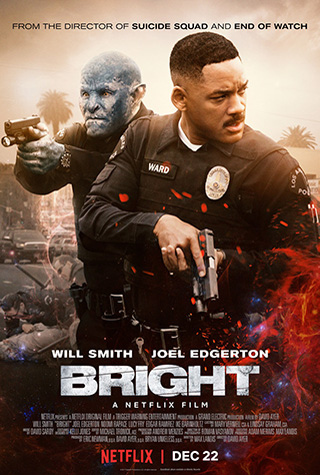