The Godzilla franchise has seen its shares of ups and downs since its inception in Ishirô Honda’s 1954 effects opus “Gojira,” boasting a filmography spanning 30 features and two major Hollywood adaptations, with another four currently in development (two of which are Hollywood backed). Interestingly, none were animated. Now, along with anime juggernaut Gen Urobuchi (“Puella Magi Madoka Magica” and “Psycho-Pass” TV series and movies) writing the screenplay and Takashi Yoshizawa (“Akame ga Kill!” TV series) producing for Polygon Pictures and TOHO animation, directors Kôbun Shizuno and Hiroyuki Seshita (“Knights of Sidonia: The Movie”) reshuffle the deck and introduce a brand new perspective that far surpasses most previous entries in scope. Though it can be bogged down at times by its one-note protagonists and recurring plot holes, Godzilla: Planet of the Monsters is a flashy, fun ride that increases in breadth with each passing sequence.

In last summer of the 1999, the appearance of kaiju turned life on Earth into a living hell and ever-constant war. Though humanity was able to hold their own throughout most of it, the arrival of Godzilla, destroyer of both humans and monsters, marked the beginning of the end for human life on Earth. Though the alien races of the Exif and the Bilusaludo arrived with promises to defeat Godzilla, all are collectively forced to admit defeat and abandon Earth. The survivors spend 20 years, traveling 11.9 light years, emigrating to a possible new home planet, which also ends in failure. Upon this development, Captain Haruo Sakaki (voice of Mamoru Miyano, “Ultraman Geed” TV series) strategically and forcibly promotes only one recourse: They must return to Earth and kill Godzilla. As they inch toward unsustainability, humanity risks everything in a final grand assault into the unknown to reclaim their home and seek out revenge.

Polygon’s 3D animation work has become instantly recognizable (a result most likely due to their ongoing collaboration with Netflix Originals), which initially can be a repellent to the more diehard fans of both Godzilla and traditional anime. Yusuke Kozaki’s character designs of the humanoids seem to be “Knights of Sidonia” melding with “Dead Space,” with their movement mostly awkward and stiff with a minimal range of facial expression (though this is also in part due to Hiroshi Shimada’s animation direction). The monster designs are creative and attractive in their ugliness (if that makes a lick of sense), as is the butchery and destruction they leave in their wake, especially of that by our titular creature. Yukihiro Shibutani’s harsh contrasts and metallic color palettes in his art direction deliver a visual universe as bleak as its story, though (at times) it devolves into a splotchy grey mess of textures. The music by “Slayers” composer Takayuki Hattori is perfectly uneasy and gets under your skin, worming around until the action on screen cause your veins to explode with adrenaline.

Haruo is a super-smart, super-driven-by-vengeance, and super-superficial protagonist that only serves as a host for humanity’s battle plan; though he has more use and personality than the only female supporting character Yuko (voice of Kana Hanazawa, “Kagemusha”), who only follows orders throughout the whole runtime without much else. Conflict or cooperation between characters only occur so certain people are propped up as the heroes (whether they should be or not), thusly squandering the potential of the unique space colony setting, and changed landscape of Earth as a test of these relationships and social orders. The scientific jargon spouted off in quick succession to qualify the many drastic changes to Earth is paper-thin, and the battle plan against Godzilla requires a sizable shark jump, but they can be glossed over in the face of the intense and well-choreographed action they help facilitate. The Japanese cast are evidently committed to the material and deliver convincing performances, with the English dub handled by Post Haste Digital of significantly poorer quality and less appropriate casting.

There’s a lot of intense fun (rife with explosions and carnage) to be had here, if you can get past the first 45-minutes of off-boiling exposition and disenchanting characters. This honestly can be said for most of the Godzilla franchise, though Shizuno, Seshita, and Urobuchi manage to keep the series fresh and rolling with the punches. Though underwhelming comparatively to the other recent entry in the series (Hideaki Anno and Shinji Higuchi’s “Shin Godzilla”), Godzilla: Planet of the Monsters is the first of a planned three-feature trilogy that I am excited to enjoy and recommend to all lovers of anime, kaiju, and science fiction.

'Movie Review: Godzilla: Planet of the Monsters (2017)' has no comments 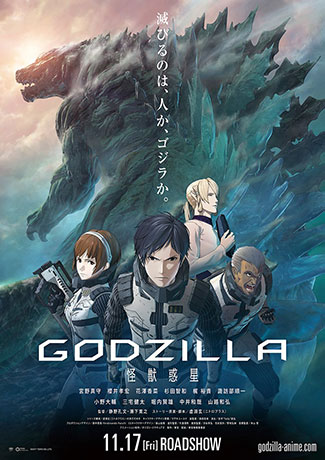