“Three Billboards Outside Ebbing, Missouri” backlashers (and I include myself in this contrarian company, though I loathed it from the beginning) need look no further than Fatih Akin’s In the Fade for a morally ambiguous female vengeance narrative not lacking the courage of its convictions. As the film’s closing title reminds us, in the early 2000s, there actually was a right-wing underground organization called the National Socialist Underground that murdered Turks in Germany. It is through this lens that Akin (German-born and of Turkish descent) refracts such staggering statistics in his humane portrayal of a family torn apart by unspeakable horror and one woman’s attempt to put together the pieces. Although, of course, puzzling out the perpetrators and their motivations does nothing to make her whole. The film’s final act finds Katja Sekerci (Diane Kruger, “The Infiltrator,” in her first role in her native German tongue), like Mildred Hayes of “Three Billboards Outside Ebbing, Missouri,” in the driver’s seat barreling towards some semblance of retaliatory justice. And, unlike Mildred, she need not decide on the way. Her mind is made.

In the Fade deftly flips the script on terrorism and the clichéd revenge narrative. It’s not hard to imagine a story in which the roles are inverted and a man (probably Liam Neeson) embarks on a violent killing spree to avenge the death of his wife and son. In fact, I think I’ve deliberately chosen to not watch that movie many times. In contrast, the particulars of Akin’s film are absolutely heart-wrenching, yet somehow his protagonist remains composed and immeasurably cool. The second act is a tightly packaged courtroom drama, marking a point of order among the chaos and horror of the crimes. Katja, as co-plaintiff and eyewitness, advocates for her right to be present throughout the entirety of trial. The courtroom — claustrophobic and brightly lit — is an affront to the vast boundless expanse of her grief and rage. Waters may appear calm, but in another place in the very same ocean, there is a colossal storm. Her internalization of emotions is punctured and punctuated by occasional outbursts (often brought on by self-medicating drug-use) that allow her release as tension builds. An act of terrorism having set off a chain of events that ripples and reverberates throughout the film, she’s the personification of a nail-filled pressure cooker set to explode.

It’s interesting that both these female empowerment narratives are constructed by men. As Inkoo Kang in an article for Slate observes: “People expect women to grieve in ways deemed decorous and unchallenging to the status quo.” With the permission of Akin and McDonagh, Mildred and Katja exhibit unapologetically indecorous behavior. And while Mildred terrorizes the law enforcement officers, clergy, and school children of Ebbing, Katja is put on trial for the misdeeds of others. Her account of events is interrogated and not believed. Her mechanisms of coping (albeit illegal) are used as means of disqualifying her as a witness. Mildred lashes out violently. Katja’s psychological trauma manifests physically. When institutions and systems fail, they look to vigilantism as a means to an end. Kang goes on to write, “[Director and writer Martin] McDonagh says he created Mildred in part as a corrective: He was ‘conscious’ that his previous films, ‘In Bruges’ and ‘Seven Psychopaths,’ were bereft of meaty roles for women.” Katja is not a corrective, per se, though the film benefits from a sympathetic and telegenic woman at its center. While Frances McDormand’s Mildred is perhaps a stand-in for the everywoman, Kruger’s objective beauty (she played Helen of Troy for Zeus’ sake!) stands in direct conflict with the horrors inflicted on (and later by) her. Retaliation is messy business, which explains why our heroines are always clad in coveralls and dark colors. Grief and sorrow, anger and revenge are amorphous and know no bounds, taking up whatever space there is to fill. Katja is given the space to run the gamut of her grief. And her final act — however vengeful or vindicated — will not soon fade from memory.

Structurally, In the Fade is tautly edited into three linear chapters: The Family, Justice, and The Sea. Each chapter is preceded by a shakily shot home video. The first flashes back to Katja and Nuri’s nuptials, with Nuri (Numan Acar, “The Promise”) having been released from prison just long enough to exchange his wedding vows. The second — filmed by Nuri — shows Katja and son Rocco (Rafael Santana) fixing a remote control car at the kitchen table. She’s the mechanic, good with her hands, possessing talents that will prophetically come in handy later. Katja films the third flashback video. She captures her son and husband frolicking along the seashore. They beg her to come swimming with them. After futile protestations about a recent sunscreen application, she sets her phone down and the home movie cuts to black. These brief scenes — no more than a minute each — provide crucial historical context (as we’d otherwise never see her familial interactions), but arguably tell us more about Katja’s future than her past.

While visiting a Turkish bathhouse, just before the deadly bombing, Katja’s sister remarks on her unfinished samurai tattoo. Katja playfully says this is her latest and last as Nuri has threatened to leave if she gets another. The appearance of this particular symbol is not coincidental. In samurai culture, maintaining the household was the main duty of samurai women. When warrior husbands were traveling or engaging in clan battles, the wife was left to manage household affairs (Katja keeps her husband’s business and financial records), care for the children, and even the defend the home. In her family’s absence, Katja now also assumes the role of warrior. Having endured unspeakable horrors, she propagates the perception of a samurai seeking vengeance against those who have wronged him (or her). After the trial’s conclusion, with Nuri and Rocco forever gone, Katja seeks out an artist to complete her tattoo and transformation. Life’s greatest beauty and its greatest sorrow lie in impermanence. Until then, one’s capacity for unconditional love and conditional hate endure. As do tattoos. 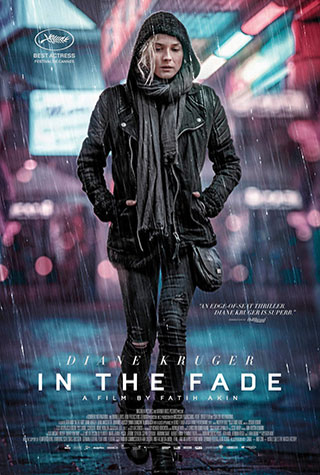