Nelson Mandela famously said, “There is nothing like returning to a place that remains unchanged to find the ways in which you yourself have altered.” As Billy (Adam Pally, “The Little Hours”) returns to his hometown for Thanksgiving, in the new comedy Most Likely to Murder, he is confronted with the myriad ways the place has changed and he hasn’t.

The film deploys its title as a darkly comic take on high school yearbook superlatives. The innate fun of which is, at the age of seventeen, imaging the surprising places life can take you: Most likely to remain high school sweethearts; most likely to save the planet; most likely to win a Nobel Prize; most likely to be Instagram famous. This film definitely wouldn’t top any category, for such dubious honors necessarily imply that people grow up and move on. That is not the case for Billy, the self-proclaimed “King of Valley Stream.” Although, his disinclination to grow up is not so much an inability as an unwillingness. After all, why would he? High school was a great experience. It is his present that’s not quite as bright.

Billy is currently working at a nightclub in Las Vegas, and it’s his self-preservation instinct to make this life sound much better than it is. After reuniting with several old friends and acquaintances at the local bar — a cringeworthy and predictable encounter for anyone traveling home for the holidays — Billy believes he’s borne witness to a murder taking place at the house across the street — a cringeworthy and unpredictable encounter for anyone traveling home for the holidays. The prime suspect is his neighbor and former classmate, Lowell Shapiro (Vincent Kartheiser, “In Time”), whom Billy tortured endlessly throughout high school. Based on what we know about Billy and his penchant for hyperbole, he’s a most reliably unreliable narrator.

Most Likely to Murder attempts to establish itself as a “Rear Window”-esque suspense thriller, although it never graduates beyond sophomoric humor and that basic conceit. I graduated high school in 2003, making the stars of Most Likely to Murder roughly my contemporaries, and the 90s-era nostalgia something I can appreciate. Billy’s parents, having sold his car, offer him the use of a scooter to drive around town. In a funny dig at a hallmark of that time, Billy protests, “I’ll look like I’m in ‘Garden State.’” Additionally, the set designers have wonderfully dressed his childhood room with relics of that period. It is presented to the visiting Billy as a time capsule to his adolescence, a reflection of his arrested development. In a funny dig at himself, Billy laments, “Look how many Cliff’s Notes I have.” Like Billy, the film tries far too hard (and is far too reliant on “Ace Ventura” jokes) to recapture the glory days of that era.

I think, however, there are interesting things to be said about the cultural acceptability of spying in this world where people put so many aspects of their lives on full display via Instagram and other forms of social media. I might even draw attention to the tree falling perceptional paradox of who these posts are really for. But rather than offering biting social commentary, Most Likely to Murder focuses instead on the precise moment when one man — a former cool guy — realizes his own creepiness. The mystery narrative is as uncompelling as the humor is immature. The film presents certain predictable, cinematic set-ups, takes a turn by not following through, and then takes the set up in an even more twisted direction. Billy is known for being a practical joker, and one gets the sense the film is meant to parallel his twisted sensibilities.

To my mind, the film’s only well executed twist is the casting of Rachel Bloom (of “Crazy Ex-Girlfriend” TV series fame and wife of director/co-writer Dan Gregor) as Billy’s pointedly not crazy ex-girlfriend. She has grown up and moved on, which marks his obsession and inability to do so as unhinged.

The film also effectively, though perhaps not purposefully, captures the feeling of being back in high school. I found myself staring out the window, daydreaming and wondering, “Do I really need to be here for this?” If you’re looking for 90-minutes of insightful and incisive comedy, you’d be better served skipping Most Likely to Murder and listening to Rachel Bloom on Marc Maron’s “WTF” podcast instead. 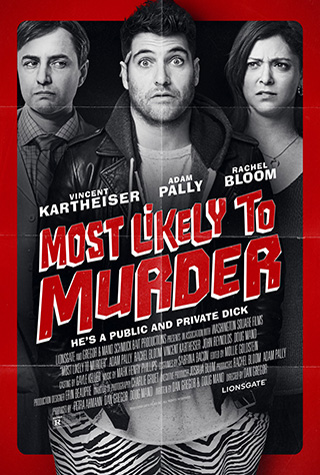