Piggybacking on the commercial (if not critical) success of other overstuffed vignette-driven holiday-centric movies such as “Love, Actually,” “Valentine’s Day,” and “New Year’s Eve,” Berlin, I Love You is the fourth installment in the “Cities of Love” franchise. This iteration, like those lovingly set in Paris, New York and Rio previously, follows way too many couples on their journeys to find themselves, connection, and their ways around a bustling city that is burdened with much baggage of its own.

After a cartoonish introduction reveals snippets of Berlin’s tumultuous past (the war, the wall, U.S. presidents making pastry comparisons and paltry demands) and eventual evolution, the Berlin on display here is understood as a city attempting to atone. It’s now know for bustling nightlife, electing a progressive female Chancellor, and providing asylum to refugees, however, any free walking tour still points out signs of a scarred past. In case the historical and personal significance is lost on viewers, Dianna Agron’s (“Tumbledown”) puppeteer points out the obvious, “Berlin is a city that knows a thing or two about a rebirth.”

Berlin, I Love You capitalizes on its European setting by relying heavily on themes of isolation for the sake of preservation. In a city where half its citizens were divided by a physical and ideological barrier, the film reiterates that walls don’t just keep people out. The film uses this backdrop to demonstrate that people put up walls, too, and each of the ten (yep, count ’em!) shorts attempts to show exactly how that is bad foreign and interpersonal policy.

The film is too long and, despite good intentions, none of the stories feel particularly well-conceived, well-executed, or vital. In each of these vignettes, one gets the sense of the filmmakers ticking off boxes, and many play like bluntly scripted PSAs. #MeToo movement, check. Transgender representation, check. Political thriller, check. Refugee crisis, check. Millennial burnout, check. Technology as the ruination of the modern world, check. First, there’s suicidal Jim Sturgess (“London Fields”) learning to love again. His arc plays like a version of “Her” with an artificially-intelligent car as opposed to personal assistant. She shows him the city and opens him up to new experiences. There’s Jenna Dewan (“Valentine’s Day”) — dead cell battery and suitcase in tow — dancing with a hot busker. There’s Keira Knightley (“Pirates of the Caribbean: Dead Men Tell No Tales”) trying to make a difference. There’s Helen Mirren (“The Nutcracker and the Four Realms”) making roast chicken and Ramsay Bolton (Iwan Rheon, “Mission of Honor”) making a run for it. There’s a burnt out performance artist (Robert Stadlober, “Trench 11”), a burnt out journalist (Sibel Kekilli, “Bullets” TV series), a burnt out womanizer (Mickey Rourke, “Immortals,” I gasped!), all of whom are learning to embrace life and love again.

Like post-World War II Berlin, the film is caught between two ideologies. Some storylines are interested in investigating heavier subject matter, and others are determined to provide an escape from such grim realities. The former rarely have happy endings and the latter depend upon them, so the overall project is under-served by the dissonance. Some stories feel too slight, some too rushed, and none particularly worthwhile.

Each implausible pairing is helmed by one of ten credited directors, an inadvisable strategy that no doubt accounts for the tonal and narrative inconsistencies. Some of the more topical storylines involve the present refugee crisis and potential government conspiracies. All ten vignettes share common thematic elements, but remain tonally inconsistent and narratively incoherent. Some are concise and distinct; while others overlap and intertwine, making it clear that all these lives exist in the same cinematic universe and the same Berlin despite such tensions. In all, the parts aren’t great and the whole never really comes together as a result, even as most of the storylines conveniently converge with one final musical number that’s meant to uplift and reinforce love’s universality, “Sometimes you feel alone and you feel like you’re not heard and you’re not seen, but when that happens, just turn around because there might be someone actually listening.” In this moment, Israeli singer/songwriter, Sara (Rafaëlle Cohen, “Beauty and the Beast”), demands the attention of her audience, but if you ask me, Berlin, I Love You doesn’t have anything worth saying. 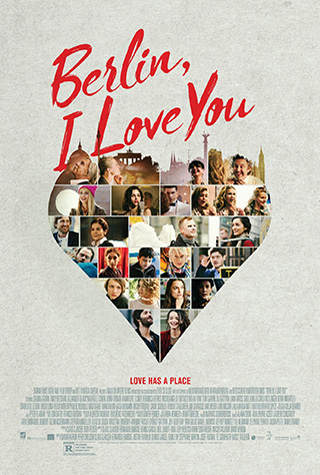