The Rider is an unflinching tribute (and one that made me flinch) to those who fully inhabit the present and “live their lives 8 seconds at a time.” It’s this short term thinking that renders it impossible for rider Brady Blackburn (Brady Jandreau) to dream of a life beyond those series of seconds at the rodeo. Much is being made of Chinese-born writer/director/producer Chloé Zhao’s second feature bursting onto the scene and entering the canon of essential modern-day American westerns, and such hot takes are not wrong. The film inherently understands cowboys as nearsighted, risk-taking individuals (“boys” to whom it is ordered and thereby ingrained to “cowboy up and be a man”), but Zhao is more engaged with their lives beyond that arena. After sustaining a near-fatal head trauma when bucked from a bronco in competition, Brady spends the rest of the film physically rehabilitating and mentally preparing himself for the road ahead, and what it might look like to leave the rodeo in his rearview mirror.

When medically inadvisable to ride or train horses, Brady takes a job at the local discount store, trading his uniform of Wranglers, patterned shirts with bandana neckerchiefs, and a Stetson for the royal blue polo of Dakotamart. He displays a flair for the performative when twirling the price gun now slung at his hip. But being a rider is an identity and a profession, and Brady cannot tear himself away from wild horses for too long. His reputation is built on taming horses that have never been ridden and no one else can break. Analogous to Zhao truly seeing Brady, Brady understands these horses innately. He recognizes that a horse’s purpose is to run across the prairie, unsaddled and unharnessed, and his purpose is to break them of that habitual desire by training these animals to accept the weight of a rider on their back.

Of course, it’s not a leap to see Brady as the embodiment of the colt that nobody can break, with glancing references to him “escaping” from the hospital and the fact he can’t be roped. Intuiting this likeness, Brady treats the horses with deep reverence and respect, caution and confidence. The scenes of him breaking them down are utterly captivating in their conveyance of that intensity, danger and admiration. Brady gives an incredible physical performance, primarily focused on exercising restraint, embracing tactility and modulating the tenor of his voice. I found myself profoundly moved and nervous watching these scenes, and I don’t even like horses! But I like Brady, and seeing him see himself in these majestic creatures is uniquely special.

Despite their strength and size and ability to inflict immeasurable injury, Brady is more at ease with these horses than with his “pardners” from the circuit. The first act is an ensemble showcasing this community of cowboys, who shoot the shit around bonfires and trade rodeo horror stories like Brody, Quint and Hooper in “Jaws.” This early scene — despite the beautiful big Dakota sky, acoustic guitar sing along and crackling, fiery glow — serves to strip all romanticism from the American cowboy lifestyle. In fact, and refreshingly so, there is no romance whatsoever. Brady’s two most significant relationships are with his special needs sister, Lilly (Lilly Jandreau), and his former mentor and former all-star cowboy, Lane (Lane Scott), who is now physically and mentally handicapped after suffering his own rodeo-related injury. Their conversations are a bit stilted and simplistic in terms of content and theme, though this is primarily a function of Lilly’s and Lane’s limited capacity for language.

When not saddled with breaking in horses, Brady spends his days training and retraining other riders, including the debilitated Lane, for whom mounting a comeback is just another dream likely to go uncaught. Later, as protege transitions to mentor, Brady hands down shirts and leather chaps to a naïve and grateful young cowboy, who is completely clueless as to the larger implications of Brady giving up the gear and the sport. Through these interactions, we become aware of Brady’s predisposition towards patience and generosity. He’s a young man with many gifts and the compunction to give, but being a rider requires the putting on of blinders as a means for hiding harsh realities (both in terms of physical and economic well-being) from their direct line of sight.

Brady is not without his own scars. There’s the mom who died young and the YouTube footage of his incident, forever existing on the Internet and haunting his headspace. When we first meet Brady, half his head is shaved to expose a long stapled scar running vertically across his skull. Once his hair grows back, the scar is completely hidden from view and Brady looks physically fine. Scars give the illusion of having healed even when an injury persists. In Brady’s case, he still suffers from partial seizures that cause his hand to make a fist that will not let go — a metaphor made manifest in a physical ailment. After Brady “breaks” his new horse, together they ride across the Dakota plains. The camera (steadied on a dolly or rig) moves right alongside him galloping on horseback, totally in sync and thus giving the illusion of him riding in place like a subject from one of Eadweard Muybridge’s Sallie Gardner at a Gallop studies. With the wind in his hair and a smile crossing his lips, Brady is treated to a moment (maybe eight seconds) of pure unadulterated joy in a life with very few.

My only gripe with The Rider is a small one. Zhao has cast non-professional actors to play versions of themselves in this gripping story and, for the most part, you can definitely tell. Brady Jandreau is revelatory in his role, but it’s his father and friends that seem the most uneasy with the given dialogue. Their performances are forced, just a touch too aware of the camera and the process. Though, it’s plain to see this decision was a necessary one, logistically speaking. She needed people with very specific professional expertise to embody these roles, and it seemed more important that the representation of a this lifestyle felt realistic and truthful, both of which it does. Scenes of Brady training horses left me scratching my head over how this movie was filmed. The decision to cast cowboys only further blurs the lines between reality and performance, a particularly interesting idea especially given how cowboys perform their masculinity and dominance daily. Zhao has broken these individuals into accepting the weight of this story. She’s corralled a pack of wild, untrained cowboys into a restrained meditative exploration of having dreams and finding the strength to let them go. 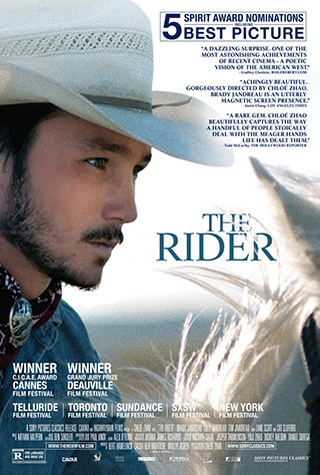