In my limited estimation, there are few things more anxiety-inducing than the thought of getting up onstage, all alone but for a sweaty drink and rickety stool, and surrounding yourself with a room full with people waiting for and expecting you to make them laugh out loud. Nina Geld (Mary Elizabeth Winstead, “10 Cloverfield Lane”) does not share my apprehension and instead thrives in this setting. The up-and-coming comedienne has found her voice. She is acerbic and confident and, most importantly, controlling the narrative. Like most stand-up comics, she relies on anecdotal material from her life to make acute observations about the world more broadly. Her opening set is not particularly groundbreaking or hilarious, but one can appreciate her “balls” in this male-dominated space. The stage does not scare her, instead it is the world just offstage — beyond the open mic and blinding spotlight — that does her harm.

Right from the start of All About Nina, the audience sees the kind of men (Jay Mohr, “The Incredible Burt Wonderstone,” to whom time has not been kind) that uncouthly come onto Nina after her biting sets, and why she’s built such strong defenses against these unwanted advances. In the next beat, we see her topless and alone in her New York City apartment, baring her body and soul, as she workshops a particularly dark story about the abusive cop she’s sleeping with. In this moment, it is the rawness of the material, rather than the nudity, that leaves her exposed. She recounts a true story of rape and abuses of power, and plays it for laughs. In fact, most of her sets comically and cosmically align with Hannah Gadsby’s recent Netflix special “Nanette,” speaking in particular to how women are taking back the narrative of their traumas and triumphs, but also serve to diminish their pain in the process of reframing the story for laughs.

With her personal life a mess and poised for greatness on a professional level, Nina moves to Los Angeles to audition for an SNL-type sketch comedy show. She stays in Silver Lake with a hippie-dippie friend of her agent, where the obvious jokes about Reiki masters, healing crystals, and cat sanctuaries ensue. Nina is staunchly opposed to these New-Agey therapies, “This isn’t for everybody. I don’t need to sit in a circle telling my truth. I own my truth already.” She understands her hypocrisy — the fineness of the line between confessional comedy and confessional healing circles — but also needs to control the space where her truth is weaponized.

Timing is the most crucial element in both comedy and relationships, and things are going well in LA, professionally, when Nina meets Rafe (Common, “John Wick: Chapter 2”). Where Nina deploys honesty — or at least brutal truth — as a means of protecting herself by scaring others away, Rafe completely disarms her with his own potent brand of honesty. He is brutally truthful to the point of being completely himself. There is no better version to present or past to sugarcoat. And it is this self-assuredness that throws Nina off her game, personally. For it is not the openness of the stage, but openness within relationships that she fears most. Nina, who has branded herself on being forthcoming in her stand-up, has a hard time letting this philosophy bleed into her personal life. As it turns out, there is a lot she’s not letting on.

As Amy Sherman-Palladino’s “The Marvelous Mrs. Maisel” has demonstrated, it is incredibly difficult to incorporate satisfying stand-up comedy into film and television. There is electricity in the air, an eagerness to be entertained, and that requisite two-drink minimums that often don’t translate beyond the hallowed walls of the Comedy Cellar or the Laugh Factory. I cannot fault writer/director Eva Vives for failing to get these laughs. It is in the assured direction of the blossoming love story between Nina and Rafe where the film and its characters really shine. They are smart and sexy and sweetly redefine the conversation around the all-important “How many people have you been with?” question. The pacing of the film feels wonderfully patient at times and then unfortunately rushed during others. Not unlike comedy itself, it succeeds in its reliance on a kernel of something real and true and honest. Well, that, and the charisma of its hot leads.

In her special, Gadsby outlines the reliably consistent flow of joke-telling: “In a comedy show, there is no room for the best part of the story. Which is the ending. In order to finish on a laugh, you have to end with punchlines.” There is tension in the set-up and a welcomed release in the punchline. Abuse can be similarly patterned and often leads to patterned behaviors and self-sabotage, thus fueling a never ending cycle of trauma. Nina has been unconscionably hurt in her life. She’s experienced horrors far greater than bombing in front of a captive audience. The worst has already happened and she uses her onstage act as a means towards liberation from the past. In her act, she chooses to finish on a laugh, but that is far from the full story. All About Nina works to show the full story — the best and worst parts of it — and ultimately offers a small, hopeful glimmer of Nina’s happy ending. 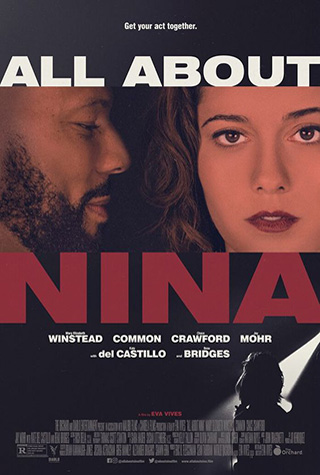