By virtue of shared history and experiences, siblings are pack animals, asking blind loyalty in return for fierce protection. They inspire imitation and a sort of “in it together”-ness. In Jeremiah Zagar’s first narrative feature, We the Animals, brothers Manny (Isaiah Kristian), Joel (Josiah Gabriel, “Night Comes On”), and Jonah (Evan Rosado) are likewise. They move (or don’t) as one, whether running wild in the woods or languishing lazily in their living room. They sleep in the same room and nearly the same bed, having pushed their cots together to create one oversized mattress. In the cold winter months of upstate New York, they huddle together under the covers chanting, “body heat, body heat, body heat,” a conjuring of the warmth they intend to bring and a camaraderie they hope will never leave.

We hear often that mimicry is the most sincere form of flattery. Family flatters and it inspires imitators. When Paps (Raúl Castillo, “Unsane”) prompts his sons to show off their dance moves, they give both rhythmic Puerto Rican and square Caucasian impressions representing the duality of their mixed background. When the impractical family vehicle breaks down, all four pile into the truck bed. The three boys loudly drum on the bedside — percussion devoid of repercussions out on the open road — and call into the wild in a showing of encouragement and support for their recently fired father. But for all the ways family can lift them up, it can also let them down. Promises are not so much broken as made under false pretenses and incapable of being kept by the very nature of what is asked. On the morning of Jonah’s tenth birthday, which she neglects to celebrate or even remember, Ma (Sheila Vand, “Argo”) has only one wish for him: “Promise me you’ll stay nine forever.” Similarly, Paps’ promise of an accompanied swim lesson becomes a traumatic near-drowning event when “tough love” is taken too far.

Manny, Joel, and Jonah are abandoned by an abusive father, and later by their reclusive, distraught mother. In the basement, they play out the faux phone calls of their parents’ inevitable reunion. The phone rings and they jokingly impersonate Ma and Paps making amends. It feels like a “choose your own adventure” game they’ve played before, and one that always seems to end the same way. Though, such good-natured ribbing turns all too real when they ask one another in earnest, “What are we going to do?” The lack of steady providers leads to a lack of food, which inevitably leads to petty theft. They divide and conquer by raiding convenience stores and local vegetable gardens for food — a pack of wild animals on the hunt.

The boys and exteriors are shot low and prowling, as if from a child’s perspective, which causes them and their surroundings to appear larger than life. They are framed along the edges of the shot, often partially cut off, signifying the ways in which they are often cut off from the world around them. Jonah is left behind by his family in a way the camera never does. If anything, quite the opposite occurs. It lingers up close; invading his personal space when he is secretly journaling under his cot or watching censored porn advertisements with equal parts curiosity and revulsion. The camera zeroes in on Jonah’s blue-grey eyes, anamorphic lenses of a different sort, these windows to the soul.

Eyes and windows feature prominently in We the Animals. Transparent and opaque partitions alike divide the boys from their parents. They are spared from signs of affection and more frequently conflict by basement walls or the cab of a new used pickup truck or a plastic shower curtain. They are often on the outside looking in (or the inside looking out), with their faces pressed to the glass, craving attention and love and support without conditions. A game of hide-and-seek goes wrong when Ma and Paps express more interest in one another than the search, thus causing the boys to disappointedly reveal their location, “You were supposed to look for us.” With nobody looking for Jonah, they hardly see him nor his desperation to be found.

Evan Rosado, the young actor playing Jonah, is a remarkable talent. His face looks every bit the nine-year-old child one moment, and nearly twice that the next. The versatility of his face and body language to illustrate ambiguity around his age is bolstered by the secret messaging in his journals and drawings. The lined notebook paper and wild doodles symbolize Jonah’s internal conflict — his desire to fit in as contrasted with the need to live his truth, no matter how messily outside the lines. There exists a surrealist quality to the animated interludes that contrasts with the stark realism of the story. Just as Jonah learned that fateful day at the lake, the fight to survive is instinctual and runs deeper than familial bonds.

During winter, Jonah’s brothers grow up and grow strong. Their hair is longer now, differentiating them from the pack. They no longer share identical buzz cuts, and they stop protecting him. They mistake his introspection for softness and oversensitivity. He’s left out in the cold, and abandoned once more.

Mimicry is the sincerest form of flattery, and it’s not difficult to see the influence of indie darlings “Moonlight,” “The Florida Project” and “Beasts of the Southern Wild” on this film, which was adapted for the screen by Zagar and Daniel Kitrosser from a novel by Justin Torres. Like these films before it, We the Animals demonstrates the deep melancholy of a childhood lived on the margins, and then the loneliness that inevitably follows when that child is made to grow up in spite of all promises to the contrary. 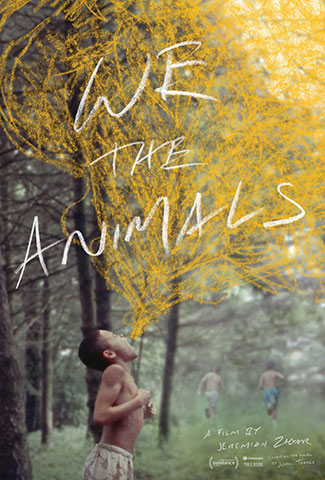