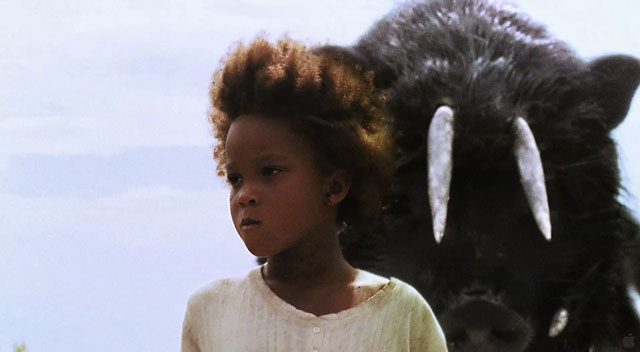 Beasts of the Southern Wild is shot through the eyes of a six year old. To Hushpuppy (Quvenzhane Wallis), the islands of southern Louisiana are a magical place filled with lucky people who do not have to live like cowards behind the levees and only get one holiday a year. Hushpuppy’s voiceover also reveals the island folk rarely need an excuse to have a party or take another holiday. If this film were shot through the more perceptive eyes of an adult, the audience I bet would get a much different take on things. Extreme poverty, alcoholism, and child neglect are just the first few overt issues which come to mind. It was a very wise move for the filmmakers to stick with the child protagonist. Magical realism is far more acceptable and preferable to an audience than what could arguably be termed child cruelty.

Hushpuppy and her father, Wink (Dwight Henry), live in an area called “The Bathtub.” It is not protected by the New Orleans levee system, people scuttle around from place to place by haphazardly crafted boats, and everyone expects that some day the melting polar ice caps will submerge their homes. It turns out that some day in Beasts of the Southern Wild is now. When Hushpuppy first hears the thunder of the coming storm, she believes it to the be the sound of melting glaciers falling off of Antarctica. It is never mentioned by name; however, the storm appears to be Hurricane Katrina. Since the main part of her father’s and his friends’ days consist of drinking, there are no preparations for the coming calamity, just praise for the brave souls staying behind for what they claim will be a little wet weather and catcalls to those fleeing behind the levees. Where is mama in all of this? The idea of mama to Hushpuppy is an old, dirty basketball jersey she carries around with her and sometimes talks to. Every now and then, Hushpuppy thinks she sees mama when she glimpses a far away lighthouse or watches an approaching helicopter. Whether mama is dead or has just run off is another unexplained phenomenon kept by daddy.

After the storm, Hushpuppy and daddy float around in their make shift boat which is the back of an old pickup truck with a struggling outboard hanging on behind it. They meet up with a few other survivors who immediately start engaging in activities they do best: Drinking. However, this was not your regular storm. The water is not receding, the animals — even the fish — are dying, and whatever sickness daddy had to start with is gaining strength. Throughout the ensuing scenes to remedy their dreadful situation, Hushpuppy keeps the audience involved with her prescient voiceover. A notable example is her comparison of getting old and sick outside of the levee wall versus inside of it. Outside there is savagery; the young will eat the old and move on. Inside, they plug you into the wall (ventilators). And whenever daddy feels he has been a particularly lousy father, he teaches Hushpuppy to do something such as catch a catfish her bare hands and be sure to give it a good punch when she gets it into the boat. There is also an odd side story involving carnivores called aurochs. They represent the savage beasts that kill and eat anything and everything. The allegory is not readily apparent and its payoff is understated at best. 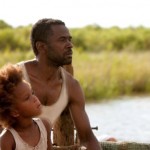 Floating along to nowhere.

This description sounds starkly bleak, which the subject matter surely is, but the film is very well put together. The scenery looks like it would after biblical destruction, the actors appear to all be locals and have the accents to prove it, and the music is incorporated effectively. The very young actress playing Hushpuppy is phenomenal. Perhaps a few years from now she will realize just how deep her character is written and how only a very minority of child actors could have possible pulled it off. Her father, while not necessarily a sympathetic character, was well cast. He is by no means an ignorant man — he is a man set in his ways determined his progeny will follow in the local footsteps. Having respect for and maintaining the traditions of your place of birth is one thing, but more than likely, Hushpuppy is being set up for a life of substance abuse and unsteady employment. However, that is jumping ahead. Beasts of the Southern Wild is about a very specific time and place with thoughts only of the next meal, not tomorrow, and definitely not next month.

Adapted from a one act play by Lucy Alibar titled “Juicy and Delicious,” Beasts of the Southern Wild is sweeping up awards at multiple film festivals. So far it has won four at Cannes, two at Los Angeles and Sundance, and one at the Seattle Int’l Film Festival — several for cinematography. It is here, interestingly enough, that I find the film’s only fault. If there is a party, the audience intuitively understands it is fun; does the camera have to wildly spin around as well? When someone is running, must the camera bounce up and down too? (I, obviously, believe it doesn’t). Nonetheless, it is a very deserving film worthy of a viewing and a follow-up conservation around the water cooler with friends. 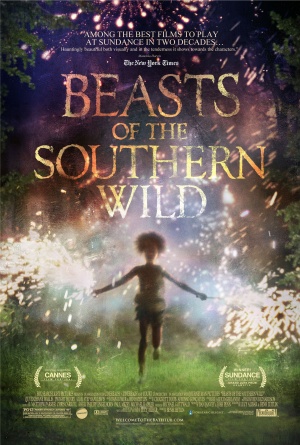