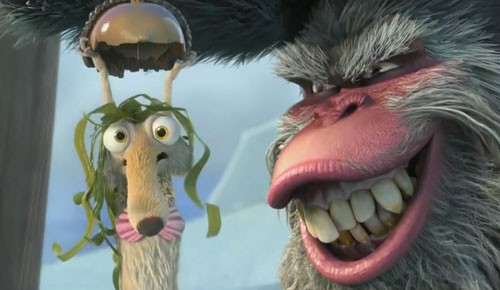 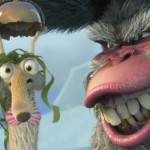 What can really be said about Ice Age: Continental Drift that hasn’t been said before? Not a heck of a lot since, this being the fourth installment of the successful franchise, it follows the same predictable story arc as it predecessors, ending up basically in the same place — ready for another sequel.

This go round, the supercontinent of Pangaea splits apart in record time (30 seconds or so) thanks to the now over-exposed prehistoric squirrel Scrat and his never ending quest for the unattainable nut. During the upheaval, which coincidentally occurs during the familial subplot of father-daughter upheaval between Manny the mammoth (voiced by Ray Romano) and Peaches (voiced by Keke Palmer), Manny gets separated from the family, leaving his wife Ellie (voiced by Queen Latifa) alone to get everyone to safety. Marooned on a floating chuck of ice with Manny are franchise stalwarts Diego the sabertooth tiger (voiced by Denis Leary), Sid the sloth (voiced by John Leguizamo) and newcomer Granny Sloth (voiced by Wanda Sykes).

As the current pulls them further from home, the quartet runs into the best antagonists of the series to date — a marauding band of pirates led by an especially good prehistoric orangutan named Captain Gutt (voiced by Peter Dinklage) and his sabretooth tiger first mate Shira (voiced by Jennifer Lopez). Gutt is especially mean — with nails as sharp as razors and teeth as gnarled as tree bark — he threatens the lives of the castaways if they don’t join his band (mostly amusing walrus, rabbit, skunk and others).

With his monotonous drone, Manny refuses, continuing to instead be the steadfast light for goodness and family honor in this world undergoing so many cataclysmic changes. Diego, well he’s smitten by Shira, so more often than not he allows her to get the upper hand on him and his friends (the things a guy will do for the affection of a lady even in life/death situations never ceases to amaze). As for Sid, he continues his best doofus routine doing everything incredibly wrong until the writers (Jason Fuchs and Michael Berg) need for him to do something right and then he saves the day.

If it weren’t for Granny, the majority of the adventure of Ice Age: Continental Drift would languish only a notch or two above boring (still better than “Ice Age: Dawn of the Dinosaurs“). Her off the cuff remarks and sharp timing, brilliantly voiced by Sykes, keeps things fresh and funny as the seafaring adventure repeats itself. As for the land locked conflict which pits Peaches between the cool mammoth crowd and her best friend Louis (voiced by Josh Gad), it feels like an afterthought to try and keep the audience engaged on the other characters. 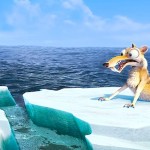 The animation doesn’t help much either — it is stuck in the last decade when “Ice Age” first made its splash. While it is bright and colorful for the kids and the icebergs, water and hair on Gutt is detailed enough for parents to take notice, Twentieth Century Fox needs to revamp their animation department. To stay relevant they’ve got to keep pace with Pixar and Dreamworks, as these companies are bounds ahead in pushing the limits of the animated feature.

But in the end a movie like Ice Age: Continental Drift isn’t crafted to win award for its story or production. Nope, it’s made to make money. And with kids out of school for the summer and a robust audience built up from the three previous movies, make money it will. Lots and lots of it. 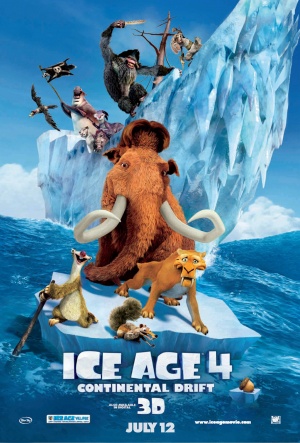