“With the hot blood of youth, of love crossed long ago;
And I took all the blame out of all sense and reason,
Until I cried and trembled and rocked to and fro,
Riddled with light. Ah! when the ghost begins to quicken,
Confusion of the death-bed over, is it sent
Out naked on the roads, as the books say, and stricken
By the injustice of the skies for punishment?” — W. B. Yeats

Unable to move, or slowly losing his ability to do so, his muscles conspiring against his motions, one by one his nerves refusing to listen — all motions of order unwaveringly overruled — Patrick O’Brien (aka DJ TransFatty) directed, starred, produced and edited this strikingly moving documentary starting at the point in which he slowly stopped taking decisions over his own body, for his body decided to stop before him. His journey to stillness is what this movie is about: TransFatty Lives, and that much moves.

A man in love with irony, fascinated with the most absurd sides of life, Patrick embraces the paradox that drives this work. He started to film this project at the moment in which he first detected there were serious mobility difficulties, and thus we witness the moment in which he is diagnosed with ALS (famous for Lou Gehrig — even more famous due to Stephen Hawking) and is given between 2 to 5 years to live. He was 30-years-old. He just turned 41 and has finished a movie documenting how his body gradually stopped moving.

Pre-ALS Patrick was very much taken by his alter ego: TransFatty. He was an enigma for most of the many people who cared about him. This enigma embarks on this project driven by the desire to come clear to his son, conceived in a relationship he started already halfway through that 2 to 5 year span. It is the love for his son, the desire to unwrap the riddle, to shed some light to it however much light was the source of all riddles for him before, that drives Patrick to document his life, to share it with his son, to show him who his father was while he is around to show it.

This letter is as well the narrative anchor that prevents the documentary from drifting. Consistent with his previous oeuvre, O’Brien keeps with the narrative neobaroquism that has characterized most postmodern works of art. Irregular, messy, oversaturated, and, more importantly, over-polarized, TransFatty Lives finds its narrative greatness in its punctilious use of counterpoints, in its rhythm, in its tone, in its texture and even in its quality — which, as a whole, works wonderfully.

Yet the enigma coming out of its existential cover, who before being diagnosed always expressed the urge to be beheld, but never opened, unknown at its very core, transforms this movie experience into a self-exploratory exercise addressed to that piece of his soul his son turns out to be. The other guy, TransFatty, the Internet celebrity searching for virality, for the ever growing desire to become a viral enigma that millions would aspire to solve out, gradually disappears in front of our eyes. The “watch me” order that Patrick issues at the beginning of his film slowly transforms into a compassionate plea, once we see him coming to terms with the sentence, which is his sentence.

I must say that there is a personal connection with Patrick, not only in terms of his disease, which has affected people for whom I deeply cared about, but mainly in terms of his pre-diagnosis life, which resonates close to home. Being a kid from the suburbs, a spawn of the sprawl, I cannot say enough how much I can relate to that boredom he expresses at the outset of his journey and to the ensuing desire, need “for something to happen,” regardless that “something” may be actually harming, because such event would give us something to tell a story about, and would potentially shake that boredom off.

The greatest challenge for any striving creativity is having to overcome its own sense of comfort, the matter of which all suburbs are made of. It is not so much the challenge of finding our own voice, but of feeling there is not anything worthy to say with it. This is the story of all artists arising at the brink of the suburban edges. Most of these specimens become their own enigmas, for they are the first who ignore the answers dwelling at the hither side of the puzzles in which their lives have turned. Typically, most of these artists end up making art out of their own existence; they become their work and their body of work — quite literally so. We do.

Then let us say that something really bad ends up happening to us, the question that will immediately emerge as we realize how much this event ends up changing us is: Why me? The journey that goes from this initially arrogant and ultimately incoherent line of questioning to total resignation, to an unconditional form of acceptance that even borders with consolation, is what has made the template for most of the great suburban stories that have ever been made — when we go from “Why me?” to “Shit happens,” It is, in O’Brien’s words (paraphrasing his therapist): “Enlightenment by shotgun.”

We thus see how Patrick starts to come to terms with his disease when he notices how much credit he receives as a person once he has become a visibly condemned man, a harmless individual to whom everybody is nice, for he bears the kind of suffering he neither merited nor deserved, (un)just randomly posited. Being visibly damned thus works to his advantage when meeting other people, perfect strangers who are good to him just for the very fact that he is overtly dying. One of those crazy human responses we will never manage to understand — that must be taken as they come.

A better person thus emerges that allows for a shift of focus on things that are actually important. “What if it is a beautiful disease?,” asks Patrick, acknowledging, embracing himself the more he lets go of his own body: “What if the more physically disabled I become is inversely proportional to my journey inward?” And how important is this question when we recognize this is a journey we will all be taking sooner or later — even though we keep deferring over and over again. The later the better.

Looking at this terrible disease as a blessing, as an eye-opener, is one of the strongest points that sticks in us as TransFatty Lives and goes on living. It is inside this illness that Patrick actually found love, which, as his partner at the time and the mother of his child defines, amounts to very much “living life the best we can.” When his son enters the scene, Patrick finds the exact opposite of his situation and finds all the more reason to seize life, to seize hope at the midst of his sentence, for it is only then that, at 33 (oh perfect capicua) he’s found the Ying to his Yang. On one end, there’s a man steadily losing his ability to move, to control his body, while, on the other end, there’s a child increasingly developing the capacity to move, to control his. When the muscles of one body stiffen, the muscles of the other thrive.

But not everything is as steady in the journey to total resignation, consolation. “In my dreams I still walk . . . move . . . ,” confesses Patrick, somehow unveiling yet another angle to the enigma we’re sometimes tempted to think is solved out. Still he is and still he lives. Still he keeps on dreaming he can move, but his hope supersedes his yearnings: “I hope the dream world and the real world never sync up.” Delving dreams down under water, digging them out the currents where they drift and fall apart, he finds himself at the threshold of these two worlds and is able to keep them to one side — and it is this capacity that keeps him dreaming, creating, but also wise. It is when he confides us an ant has shown him he’s much more in control when he surrenders, when he relaxes and lets go, that we understand his dreams will stay behind his ability to create worlds outside the one in which he has accepted things as they are.

TransFatty Lives is a brutally honest documentary. It is brutal in the sense that it looks at everything, every event, the way he looked at them at the time they were lived, livestreaming his decline without a know-it-all voice stemming from the future (that is the present) to add some perspective to his past (that is the movie) — that voice of the afterfilm that is omnipresent in the past and omniscient in the present and can tell us what things really were and meant through phantasmal voiceovers is the voice that through its absence conveys the kind of truth that grows within us as much as it grows in the character, the subject, the man we follow through.

The letter to his son gives no opinion, no judgement and very little perspective about his past. And so it goes till the end: “Death makes those observing it feel immortal,” observes O’Brien. But that feeling cannot be shared by those who have been recognizing death’s presence preying upon themselves for quite a long time, resignedly waiting for it to fully show up. How will it be? “I’m still waiting for my happy ending . . . this death scene is starting to drag for too long . . . Sorry, this isn’t my best angle. Don’t worry. I’m ok.” And he is. Unable to move he made a movie, a testament to his son and a love letter to life. Yes, he’s going to be alright. 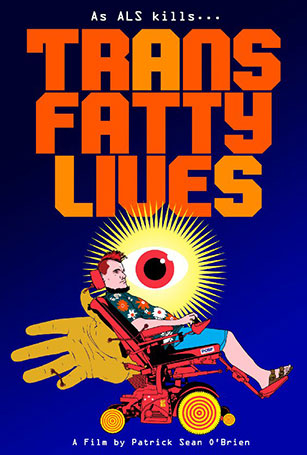