Nothing has more impact on a nation than when an act of terrorism hits home. A disaster like that brings a rattled world together with a resolve to press forward through strength and perseverance. That same notion also extends individually from person to person and when a devastating catastrophe happens to you or someone close to you, your goal is to not just be ingrained for the betterment of yourself, but for others as well.

When carrying this attitude, betterment can be good because it becomes a personal conviction that can help your environment during an aftermath of a depressing situation . . . but it can also consume your soul. Writer-director Billy Ray (“Breach,” “State of Play” and “The Hunger Games”) explores this temperament in his new film Secret in Their Eyes, which is a remake of an Argentine film of the same name that won Best Foreign Language Film at the Oscars in 2010. Ray is no stranger to dramas with high stakes. His last screenplay was based on the true oceanic suspense thriller “Captain Phillips,” which earned him a Best Adapted Screenplay nomination in 2013.

Saying that the making of Secret in Their Eyes is a tall-task would be an understatement since it already has to fight against three major elements: It’s a remake of an Oscar-winning film, it’s a film with Oscar aspirations of its own, and it’s a police procedural (a standard television genre that has been entering our eyes, ears, and minds since the dawn of time). While there are multiple similarities between both movies like its cinematic use of the flashback structure, there are multiple differences in this current version in order for it to stand on its own. In this adaptation, there’s no shame in creating an American tale out of its foreign origins. It’s 2002 and we find a seemingly calm, cool and collected protagonist, Ray (Chiwetel Ejiofor), a New York FBI counter-terrorism agent who’s trying to help the Los Angeles police department prevent the next 9/11. His job transforms into a mission when he finds out that the daughter of his colleague and dear friend, Jess, solidly played by Julia Roberts (“August: Osage County”) is viciously raped and murdered. It’s easy to roll your eyes at another TV plot you’ve seen a thousand times before, but remember, when tragedy hits home, things get personal — and so does this movie.

While billed as the Nicole Kidman (“Rabbit Hole”), Julia Roberts, and Chiwetel Ejiofor (“The Martian”) show, there’s no question that this is Ejiofor’s film . . . but when the story’s character hierarchy finally settles, it struggles to properly juggle Kidman and Roberts as supporting characters. The catalyst of this tale is centered on Jess’ (Roberts) loss and her friendship with Ray (Ejiofor), while the film’s subplot centers on a forbidden “will they, won’t they” office romance between Ray and Claire (Kidman). All three actors provide strong performances that carry the film with various fluctuations of dense intensity and decent subtlety, but I don’t think the actors will receive any award-winning accolades. It’s not due to their performances, but uneven story arcs that keep certain characters from a memorable excellence. Although, if I were forced to place a bet, my money would be on Roberts because she plays an intriguing character who becomes disturbed and disheveled after the murder of her daughter.

As interesting as some of the tension is and the creative notion to avoid clichés is commendable, ultimate satisfaction within the given narrative falls short. Some stimulating situations are set up, but don’t go anywhere and certain plot points that are meant to invoke shock value lose its surprising energy due to verbally describing a scene before visually showing it. Regardless of that, the story does leave you wanting more — which is what a great movie should do, but here, its narrative almost seems incomplete. However, the unraveling mystery of who killed Jess’ daughter is very entertaining to watch as it’s constructed with engaging set pieces such as the seemingly ordinary, yet tense chase sequence in Dodger stadium. Plus, you don’t have to be a baseball fan to know that was one of the moments in the movie where the filmmakers absolutely knock it out of the park (and yes, it’s better than the original scene). Yet, it’s no rumor that the original film is more modest dramatically, while this version is more boisterous with its confrontational intensity (because that’s how we roll in the red, white and blue).

Although Secret in Their Eyes may be in the running to make noise this awards season, I don’t see it capturing Best Picture gold. At the very least, however, it will bring forth conversations about something we can all relate to: Moving on from a thought-provoking past that haunts us while an uncertain future awaits. 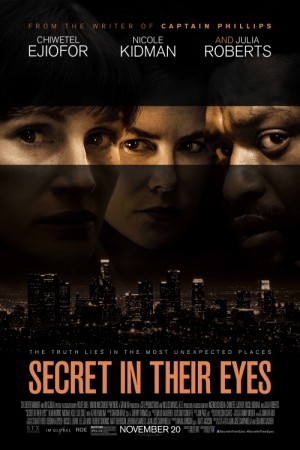