Even with two traditionally bankable stars in Ryan Gosling and Russell Crowe, writer-director Shane Black’s last film, “The Nice Guys,” a dark 70’s buddy-cop movie, was an underwhelming box office release in 2017. For 21st Century Fox, the more recent staples of their lineup has been the “X-Men” and “Planet of the Apes” series (and now the “Deadpool” franchise) with much else of their offerings failing to strongly resonate with audiences. Interestingly, however, the studio hasn’t revived much of their old IP (ignore “Independence Day: Resurgence,” if you can), but that changes now with The Predator. The bet: Shane Black can bounce back and breathe new life into their “Ugly Space Monster with Dreadlocks.”

The greatest strength of The Predator is its mostly low-level cast, and unfortunately, it’s also one of its weaknesses. Sterling K. Brown (“Black Panther”) who tackles the role of government official jerk and Trevante Rhodes as one of the more outspoken “Loonies” outshine the film’s supposed leads (Holbrook and Munn) with engrossing charisma despite irregular and lackluster arcs. Jacob Tremblay (“Room”), this generation’s Haley Joel Osment, also gets to continue his reign playing a “special” kid in the role of Quinn’s autistic son who helps against the predators due to his keen pattern recognition.

Keegan Michael-Key is there for the obvious comedic reasons, but he’s also a symbol of the rest of film’s talented, yet wasted, supporting cast who are there for little more than getting their name listed on an IMDb page. Olivia Munn, who isn’t the first name one thinks of when thinking of accomplished actresses, works to the best of what ability she has, but she’s about as convincing an evolutionary biologist as Denise Richards was as a nuclear physicist in “The World Is Not Enough.” No one is (or should be) expecting The Predator to be a critically acclaimed film, but with Marvel proving popcorn movies can have fully fleshed out characters and a coherent plot to go with the ridiculousness, there is no excuse for Black and fellow screenwriter Fred Dekker (“Robo Cop 3”) to not offer up something more substantial.

As it stands, Shane Black’s entry into the Predator universe is a bloody fiasco (which means he shows us a multitude of ways on how to kill a lot of people) and not much else. He does, interestingly enough, do the blood and guts aspect of The Predator surprisingly well, though. And if that, ladies and gentlemen, is enough to satiate your entertainment needs, then cheers to you — enjoy the spectacle for what it is and wait for the invariable sequel to crash land at a theater near you in the near future. 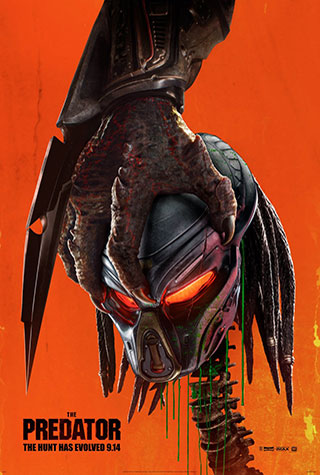