In a world in which sequels appear decades after the original film (such as “Bambi II,” “Fantasia 2000,” “The Wicker Tree,” “Easy Rider: The Ride Back,” “TRON: Legacy,” and “Wall Street: Money Never Sleeps,” among others), let’s just say the results are, well, not very good. People usually do not want to wait that long and when the picture is released, it is constantly compared to the first one, anyway.

Now, two films are trying to overcome that jinx, “Ghostbusters: Answer the Call” (with a mostly distaff cast) and Independence Day: Resurgence.

The original film, “Independence Day,” directed by Roland Emmerich (back for the sequel), earned a whopping $800 million at the box office and was the top grosser of 1996 (the same year Bob Dole thought he would make a good President). It starred Will Smith (of “Concussion” and 2015 non-Academy Award nomination fame), Jeff Goldblum, Randy Quaid, Judd Hirsch, Bill Pullman (not to be confused with Jeff Daniels or Bill Paxton) and Vivica A. Fox, among others and while panned by most critics, had enough oomph to best it’s nearest rivals, “Twister” and “Mission: Impossible” by nearly twice as much money.

Plot — what little there was — had hostile aliens invading Earth, destroying the White House and other national landmarks before being defeated by Smith, Goldblum and a drunken Quaid.

In the here and now, the world has forged an uneasy peace with the enemy (even keeping a few comatose raiders in storage as bargaining chips in the meantime). We borrowed their technology, so we have learned to “control gravity,” but we are also getting ominous signals from the Moon and Saturn, among other places, which seem to show the defeated alien fleet is on its way back to reclaim it’s former booty.

Of course, this should be a piece of cake now that Captain Steven Hiller (Smith’s gung-ho character) has “died” in a plane crash, leaving his equally handsome, but dullard of a son, Dylan (Jessie T. Usher, “When the Game Stands Tall”), taking his place.

Another hotshot pilot, who is also new to the Independence Day: Resurgence cast, Jake Morrison (played by Thor’s little brother, Liam Hemsworth, “The Hunger Games: Mockingjay – Part 2”), is part of a group of dedicated airmen (and women) who are constantly being berated by a Chinese general and a female President (Sela Ward, “Gone Girl”) until the showdown is upon them. Oh, and William Fichtner (the guy who raped Ving Rhames in “Pulp Fiction”) gets to play President, too. Yay.

In 2016, the aliens have much more sophisticated ships and weaponry (here, London gets the boot, and we were worried about Brexit), but did not count on the addled former President Whitmore (Pullman, who now looks like the Most Interesting Man In the World) and comatose Dr. Brakish Okun (Brent Spiner, most famous as the android “Data” on “Star Trek: The Next Generation” and now a cross between Tiny Tim and Eugene Levi).

The invaders also could not have known that 105-year old Julius Levinson (Hirsch, “Tower Heist” and Oscar-nominated for “Ordinary People” a long, long, long time ago) and his computer specialist son, David (Goldblum, “The Grand Budapest Hotel”), would find a large ball that had once fought the evil beings. Now, the huge sphere has all the answers and like an annoying and overgrown Siri, is now blathering on about it, leading the alien queen right to her big mouth in the Bonneville Salt Flats.

As demented as they appear to be, though, Whitmore and Okun manage to decipher a code which will help bring the invaders into a trap, while there is also a subplot about the bad creatures drilling a hole through the Earth’s core and a group of drunken fortune-seekers in a rickety boat watching them, as well as a school bus full of kids whose parents have conveniently died so that Julius can adopt them. Or that EVERYONE in this movie is also a professional fighter jet pilot, even Whitmore’s daughter (Maika Monroe, “It Follows”), despite no demonstrable evidence except that it’s in the script . . .

Whatever. Independence Day: Resurgence, while looking great with its blue screen hi-tech gadgets and scientific gobbledygook, is just as loud and ridiculous as the original, but nowhere near as fun or interesting. Let’s face it, 20 years ago, these outrageous movies were just appearing on the radar screen and we were not as immune to the stupidity of it all back then.

Today, after decades of this kind of garbage (“Battleship,” “Battle: Los Angeles,” 2005’s “War Of the Worlds,” the “Transformer” franchise, etc.) we usually just walk away from the films like this and find something else to do. Many people are discovering that “Finding Dory” is the best alternative from a motion picture point of view.

However, if one MUST see Independence Day: Resurgence just remember a few things. Like Michael Bay, Emmerich is a terrible director (just watch “2012” if you do not believe me) who believes wholeheartedly an explosion, natural disaster or alien attack will substitute for a quiet, cerebral conversation every time.

Still, as far as ludicrous stories are concerned, I suppose it’s nowhere near as bizarre as “Free State Of Jones.” Thank goodness for small victories. 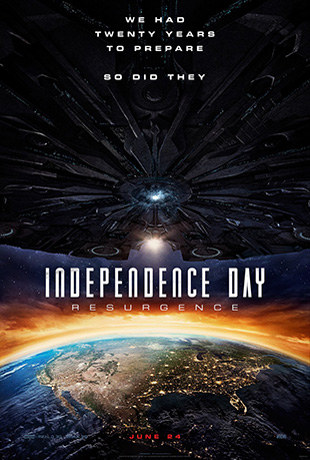