Richard Vanuk (Daniel Falicki, “Devils in the Darkness”) is a guy who struggles. He’s struggling to pay his rent and keep his landlord’s thug son off his back. You could say he’s struggling to stay sober, but I think it’s more accurate to say he’s struggling to keep enough alcohol in the house to keep himself sane. Vanuk also struggles with his work. It’s not for lack of talent or ability; as a matter of fact, Vanuk is rather gifted, as one of his clients tells him. Despite this appreciation, however, he is incredibly worn down from the intensity of his work. Vanuk is an exorcist, you see, and while the task seems effortless to complete, it drains him each and every time.

The routine is simple: Vanuk receives a call and is given an address. He arrives at the address, asks everyone to leave the room, and faces the possessed alone. Sometimes he chats amicably, sometimes he shares a meal, and sometimes there’s a physical altercation, but he remains calm and collected, and helps heal the afflicted. Afterwards, though, he loses consciousness and wakes in a snowy park next to an envelope containing his payment. He is a haunted man, and not just by the demons he exorcises; for Vanuk, exorcisms are like the drudgery of an underpaid office job, but how does a person give up the one job he’s truly meant for?

Accidental Exorcist is an odd film that’s hard to put your finger on. At first, it seems like a horror-comedy focused simply on the banality of possession in the genre. Vanuk goes from possession to possession like an exterminator who shows up to spray for ants. Clearly, he has seen it all, and uses plenty of cynical one-liners to keep himself (and the audience) entertained. Gradually, however, you realize the story isn’t about the exorcisms themselves, but about Vanuk.

The story, written by director Daniel Falicki (who also stars as Vanuk) and producers Warren Croyle and Sheri Beth Dusek (who cameos as the Bar Queen), aligns the audience with Vanuk as a dark hero, and while we chuckle at his gall, we also empathize with his exhaustion. Those who are especially talented at their jobs often claim they feel “called” to their professions, and it seems that Vanuk is no different. With patience and skill, he heals person after person, yet ironically, he is unable to shake his own — both literally and figuratively. Falicki embodies the character well, and it’s evident that care was taken in his development. While Vanuk’s job is old hat to him, he’s keenly aware that it’s very scary for his clients, and you catch a glimpse of purity in a man who struggles to keep himself, and his surroundings, clean.

As with any exorcism film though, attention must be paid to the possessed themselves. The makeup is kept relatively simple, but it’s still effective, though there was quite the emphasis on vomiting. To be fair, Vanuk, who has experienced the phenomena so often he’s bored with it, addresses it comically, which adds life to an otherwise overdone element of the subgenre. Credit has to be given to Anne Cope, whose special effects makeup was subtly creepy and unnerving, and the actors and actresses who played the possessed, especially the Reverend (James Harris) and the Mask Maker (Chris Kotcher, “Buzzard”), who reminded me that even though you’ve seen far too many possession movies, there’s always a chance to unsettle you in new ways.

While Accidental Exorcist could have benefitted from some additional editing of repetitive sequences in Vanuk’s apartment and at the bar (which would help streamline the runtime), overall, it’s an interesting character study of a man trapped in his talent. It won’t scare you or force you to sleep with the lights on, but it will definitely make you appreciate that your particular 9 to 5 isn’t Vanuk’s. 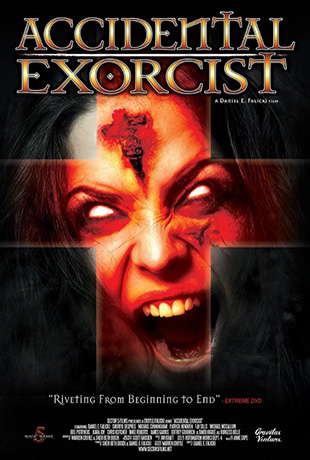