Recipient of a Golden Globes nomination for Best Actress in a musical or comedy, Lily Tomlin (“Grace and Frankie” TV series) may be a bit over-the-top as the tough, outspoken, and cantankerous 70-something Elle in Paul Weitz’ (“Little Fockers”) Grandma, but she is also very funny and very real. If you’ve heard of tough love and ruthless compassion, you will know what you are getting. Divided into six chapters labeled “Endings,” “Ink,” “Apes,” “The Ogre,” “Kids,” and “Dragonflies” we first see Elle in the process of breaking off her same-sex relationship with her young lover Olivia (Judy Greer, “Ant-Man”) and it is not gentle. A feminist poet who hasn’t written in a while, Elle is good with words and uses them to best advantage in her split with Olivia, telling her, “You’re a footnote.”

If Elle thought that she would finally be left alone to ride off into the sunset, her expectation is thwarted when her granddaughter, the teenage Sage (impeccably played by Julia Garner, “The Perks of Being a Wallflower”), suddenly shows up unannounced with something on her mind other than to see what’s for dinner. Turns out, Sage is pregnant and needs $630 to pay for an abortion which she has scheduled for later the same afternoon. Unfortunately, grandma pleads poverty, admitting to cutting up her credit cards and hanging them on her porch as a mobile. After some choice words to Sage, none of which are particularly comforting, the two set out in a barely running 1955 Dodge Royal to try to find friends that can help.

The journey quickly becomes an exercise in nostalgia but little else and the money is still found wanting. Along the way, Elle and Sage meet Deathy (Laverne Cox, “Orange is the New Black” TV series) a trans tattooist who makes a small contribution but they strike out with Carla (the late Elizabeth Peña, “Modern Family” TV series), a coffee shop owner, who won’t give much for the first edition books Elle tries to peddle. A short visit with Cam (Nat Wolff, “The Intern”), reveals that the young father-to-be has never heard of the word “responsibility,” and is soon the recipient of a hockey stick to the groin engineered by dear old Elle.

Perhaps the most affecting visit is with Karl (Sam Elliott, “Did You Hear About the Morgans?”), Elle’s former husband whom she abruptly left thirty years ago and left a legacy of resentment and betrayal. A meeting with Judy (Marcia Gay Harden, “Fifty Shades of Grey”), Elle’s daughter and Sage’s mother, produces more promising results, but only after much painful conversation. To say that Grandma is filled with abrasive characters is to state the obvious, but, beneath the hard shell, the film has a lot of heart that leaves us with the feeling that, in their journey, each character has discovered depths they didn’t know were there. 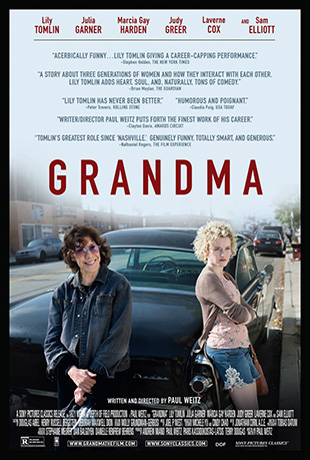