Baronesa is the ironic title of Brazilian director Juliana Antunes’ documentary or docu-drama, a film that presents life in the Brazilian favelas through a number of scenes that primarily focus on the daily lives of two of its residents, Andreia (Andreia Pereira de Sousa), a manicurist/beautician, and her friend, Leidiane (Leid Ferreira). The title’s irony lies in the fact that it suggests personal elegance or high status; in fact, it’s the name of the favela where Andreia wishes to move. It is considered less violent than Belo Horizonte (another misnomer), where she currently lives and where the action of the film occurs.

Antunes’ method in creating the film seems to be similar to theater improvisation, and results in the same texture: The director selects a topic for conversation and the women address it. These topics focus on the daily challenges in the lives of women, and Antunes seems to have selected those conversations that seem most natural, robust, and film-worthy. They reflect the disillusionment that comes with adulthood, family and sexual matters, nostalgia in recalling moments of happiness, and issues of personal safety. The subject of death, either as human inevitability, in general, or as implicated in the violence around them, specifically, often imbues the subject matter. Negao (Felipe Rangel dos Santos) is the only adult male present in the film, and he possesses a levity that endears him to the two women, even as he too discusses matters of actual life and death within the community.

The style of filmmaking may be classified as belonging to the tradition of what Charlotte Brunsdon calls “women-talking.” A woman director who, through her empathic attitude and treatment of her subjects, claims to reveal truths regarding them characterizes the format. This occurs despite the presence of the camera that ipso facto affects the nature of the reality it is recording, and what the director and editor decide will be included and how it will be included in the final cut. To strengthen her connection to the women she depicts in Baronesa, Juliana Antunes spent five years getting to know them, and lived near them for six months.

Despite a reliance on conversation, there is pertinent and symbolic action in the film. At one point, Negao appears to play a form of Russian roulette, asking Leidiane to train a gun on him and pull the trigger, as a means to steel him for inevitable gang violence that is threatening the area. What distinguishes Baronesa is that it is genre bending: It possesses seemingly unrehearsed aspects of a documentary with directorial guidance. This cinema verité approach required the subtle imposition of the director in her attempt to create a visual aesthetic that makes the film more than a series of haphazard glimpses into the lives of its subjects.

There is a subtle rhythm in the story telling, which creates a unity that a random sequence of scenes would lack. Thus, although most of the life in the favela is revealed through simple conversation in modest surroundings — inside either a home or just outside on the front steps — the substance of the women’s lives is communicated in a way that avoids a clinical, sociological approach. The film doesn’t have the narrative flow one might find in a documentary that follows a logical real-life event, for example, a political campaign or the process of creating a work of art or architecture. However, it hangs together because conversation and at times dramatic interaction focus on recurring themes.

However, Baronesa subtly rises in action and ends with an alarming resolution. While Andreia and Leidiane are recalling Brazilian rap lyrics about life in the favela, rapid gunshots are heard nearby, and the two women frantically flee to protect themselves and family. Soon after, Andreia is constructing her home, single-handedly assembling it with bricks and mortar, hoping that life in the Baronesa neighborhood will be more coherent.

Antunes’ film allows the viewer to experience favela life at street level. It is a welcome addition to the “literature” of what some people would call the underclass and underrepresented. There’s no choreographed gang violence and SWAT teams equipped with elaborate artillery to confront them in Baronesa. Antunes is successful in taking us away from the high production value fantasies typical of depictions of Latin American society. It’s about time. 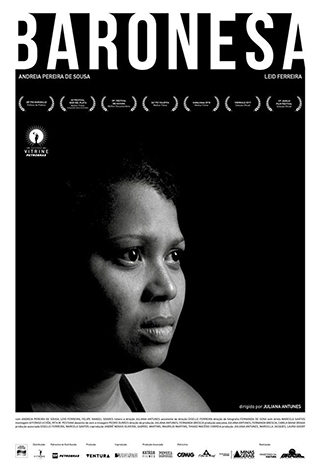