In 1915, D. W. Griffith’s film “The Birth of a Nation” was released, en route to becoming one of the most influential and controversial films in cinema history. Griffith’s historical epic created indelible imprints on film content and style, particularly in the areas of racial representation and editing. A century later, Spike Lee’s BlacKkKlansman attempts to reclaim cinema from white hegemony, in part by acknowledging, incorporating and repudiating the imprint of earlier works.

Lee’s film portrays the story, declared in the opening credits as “fo real,” of Ron Stallworth (John David Washington, son of Denzel), the first black recruit of the Colorado Springs Police Department. Taking artistic license with this true life story, Lee and fellow screenwriters Charlie Wachtel, David Rabinowitz and Kevin Willmott create an intricate tale of America in the early 1970s, a period rife with political tensions that threaten to erupt into violence. Ron quickly proves himself to be a skilled and competent officer, who opposes racism among his colleagues while also taking advantage of the progressive opportunities in the CSPD. Chief among these is Ron’s idea to infiltrate the Ku Klux Klan, beginning with a phone call in which he foolishly uses his own name. When the chance arises to meet with members of the “Organization,” Ron and his partner Flip Zimmerman (Adam Driver, “Star Wars: The Last Jedi”), develop a fictional persona of Ron Stallworth, white supremacist, and gather further intelligence.

As a drama, Lee’s follows familiar tropes of cop movies, especially from the period in which BlacKkKlansman is set, including “The French Connection,” “Dog Day Afternoon” and “Shaft.” His director of photography, Chayse Irvin, blends 35mm with 16mm, lending the film a grainy texture. Production design, costume and hair as well as a pumping jukebox soundtrack create a similarly tactile sense of time and place. The banter between Ron, Flip and other cops is engaging and tough without being clichéd; tensions arise between the job and life outside; Flip and Ron’s creation of “Ron” explores the creation of identities, recalling “Serpico,” “Miami Vice” and the recent “The Infiltrator.” And like many a movie cop, Ron is obsessed with his job but, unlike his white counterparts both in this film and others, he has a political agenda. Flip at one point describes Ron as being on a crusade, and it is a crusade that seems necessary and justified when one sees the racism of 70s America, which is horrifying both in its viciousness and its mundanity.

It is to Lee’s great credit that the politics do not overwhelm the drama, BlacKkKlansman never descending into soapboxing. Rather, the events and characters are allowed to speak for themselves, from the well drawn and never caricatured figures that make up the Klan, including David Duke (Topher Grace, “American Ultra”), Walter Breachway (Ryan Eggold, “The Single Moms Club”), Felix Kendrickson (Jasper Pääkkönen, “Vikings” TV series) and Ivanhoe (Paul Walter Hauser, “I, Tonya”), to Black Power activists Patrice Dumas (Laura Harrier, “Spider-Man: Homecoming”), Kwame Ture (Corey Hawkins, “Kong: Skull Island”) and Jerome Turner (Harry Belafonte, “Under African Skies”), who could so easily be idealized but are wonderfully human, reminding the viewer that significant developments are made by ordinary people and that anyone can contribute to change. Turner has perhaps the most poignant scene in the film, his calm but desperately sad narration intercut with the Klan members watching “The Birth of a Nation,” hooting with glee at its portrayal of black and white alike.

This aspect of the film speaks to its most significant statement: An African-American reclamation of cinema. This is demonstrated through Lee’s inclusion of “The Birth of a Nation,” and through the editing of BlacKkKlansman itself. Laura Mulvey’s influential article “Visual Pleasure and Narrative Cinema” argues that the look of cinema is intrinsically male, and the influence of a film like Griffith’s demonstrates that dominant filmmaking practice, at least in America, is also white. This white practice is especially apparent in Griffith’s utilization of parallel editing and crosscutting, which sutures disparate locations together and, through an increased editing pace, builds tension. Griffith demonstrated this in chase sequences in “The Birth of a Nation,” especially with voracious black men chasing virginal white women. Thus, film grammar was linked to dangerous racial stereotypes. But in BlacKkKlansman, Lee frequently disrupts the editing pattern, crossing the 180-degree line with jarring cuts that interrupt the typical progression of cinematic shots. The viewer is therefore shocked out of their complacency by the film style as much as by the material.

Lee pursues this conceit by eschewing the conventions of undercover cop thrillers as much as he includes them. This includes Flip encountering people who are very dangerous, but the emphasis is more on Flip’s improvisation than the threat of violence. Therefore, the film furthers its investigation into the performance of identity. Flip/Ron’s construction of “Ron” is all the more compelling when the viewer is shocked out of their complacency both by the editing pattern and the defiance of genre expectations. When a nail-biting sequence does occur, there is emphasis upon attitudes as much as actions, and the most significant explosions of violence do not occur on the narrativized events, but in news footage of Charlottesville in 2017 at the very end of the film. Lee has often incorporated news footage into his films and has a consistent difficulty with conclusions, as demonstrated in “Malcolm X” and “25th Hour” especially. In this case, however, he gets the balance right, again reclaiming cinema by intercutting the protests of Charlottesville with President Donald Trump’s public statements about these events. Thus, the apparatus of racial oppression is expressed and highlighted through the apparatus of cinema. Simultaneously, the medium is reclaimed and utilized by one of today’s most important filmmakers to tell a story that is gripping, compelling and deeply urgent. 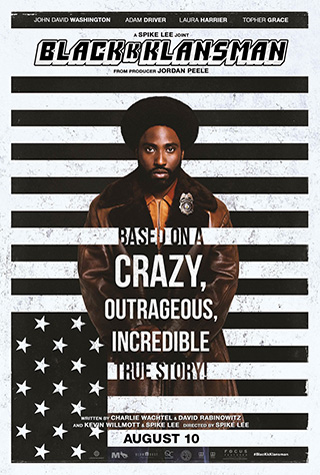