A poignant love story, Arnaud Desplechin’s (“Jimmy P.”) My Golden Days (Trois souvenirs de ma jeunesse) is filled with warmth and humor and delivered with a lively and playful touch in the Desplechin style: The use of voice-overs, split screens, the iris-effect, and characters looking and speaking directly into the camera. Challenging us with numerous classical allusions including references to 18th Century French painting and Greek mythology, the film’s dialogue is witty and literate and can be regarded as the modern equivalent of Proust’s “In Search of Lost Time,” a nostalgic look at the haunting depths of past memories.

The film is separated into three sections depicting fifty year-old Paul Daedalus (Mathieu Amalric, “The Grand Budapest Hotel”) reflecting on his unhappy childhood, talking about his adventures in Russia as a teenager, and dissecting the intricacies of his off-again, on-again relationship with his first love Esther. In the first part, anthropologist professor Paul Daedalus (Amalric), returning to Paris after many years of working in Tajikistan, is detained by a customs official (André Dussollier, “Micmacs”) and questioned about the authenticity of his passport. Shown in flashback, he talks about his childhood and the time when, at age eleven, he threatens his seriously disturbed mother Jeanne (Cécile Garcia-Fogel, “Regular Lovers”) with a knife if she will not leave him alone.

After running away from home and parting with his sister Delphine (Lily Taieb, “Quantum Love”) and brother Ivan (Raphaël Cohen), he moves in with his loving great-aunt (Françoise Lebrun, “The Kidnapping of Michel Houellebecq”) while we discover that his mother took her own life, leaving Paul’s father Abel (Olivier Rabourdin, “Taken 2”) depressed and unable to take care of his children. Under further questioning to explain why there is another Paul Daedalus living in Australia who was born on the same day and year, Paul relates the story of his high school trip to Minsk when he was an idealistic 16-year-old.

At that time, he and his friend Marc (Elyot Milshtein) agree to smuggle money and passports to Russian Jews denied permission to emigrate by Soviet authorities. Events are presented as an amateur spy thriller and a well-planned dash from the tour group leads the boys to a surreptitious meeting with the “Refuseniks.” After offering his passport to one of the men, Paul gives himself a black eye to provide an alibi to the authorities that he was mugged and his passport stolen, an explanation the Customs official seems to accept.

In the final section, Paul, now 19, develops a relationship with his sister’s friend, the 17-year-old Esther (Lou Roy-Lecollinet), a coquettish and attractive blond who has the kind of presence that can dominate a room. She is mature beyond her years and very aware of the effect she has on men (and does not care what others may think of her). Even though she shows her independence by keeping Paul at arms length with other boyfriends, they have a very special chemistry that keeps them together. Paul divides his time between Paris and his family home in Roubaix, putting a strain on his relationship with Esther.

In Paris, he pursues a career in anthropology, developing close ties to Professeur Behanzin (Eve Doe-Bruce), an older woman whom he looks to as a mentor and substitute parent. Forced to live in hostels and dependent on the hospitality of others, he falls for Gilberte (Mélodie Richard, “Métamorphoses”), the girlfriend of the young man who puts him up when he can’t find a room at the hostel. As ties loosen, his relationship with Esther becomes a more open one and she claims that during the time he was away, she had fifteen lovers while he remembers only seven.

As My Golden Days moves back to present time, Paul is bitter about his past failures in love, and takes out his frustration on his long-time friend Kovalki (Pierre Andrau, “My Friend Victoria”) who dated Esther. For Paul, as William Faulkner said, “The past is not dead. It’s not even past,” and he can relate to the Zen saying that, “The more things change, the more they remain the same.” It is a frustration that Paul may just have to live with. 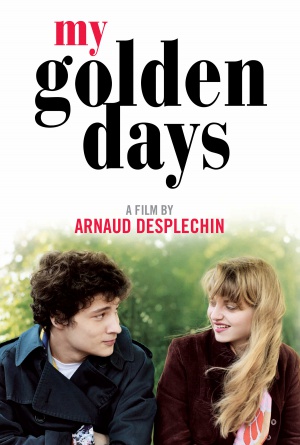