Babbling in a bubble. Like babbling in a bubble. No wise words. No intelligible ideas. Only an interminable babble of three carton-cut characters living in the little bubble that this film provides. Watching Wasp is like listening to an irrelevant insect buzzing around without it becoming anything but a mild nuisance in the background. The problem, in this case, is that there’s nothing in the fore.

Hollow sounds is what in low waves this Wasp allows. A supposed character study becomes an untidy sample of understudied characters — three underachieved models aspiring to become people, a Pinocchio-like wish without the innocence of a child. Rather what we have is a chilling trio unable to chill out.

Three English young adults — two younger than the other — take a holiday at a “beautiful” country house in Provence, France. The house is property of the daddy of the oldest of the three, Olivier (Simon Haycock). His original plan was to take the holiday alone with his boyfriend, James (Hugo Bolton), who, compassionate soul, has invited an acquaintance from his MA program who has just broken up with her boyfriend. Caroline (Elly Condron) has been hurt at the kernel of her femininity, yet she kind of feels it coming back as she starts sensing a certain ambiguity in Olivier and feels no remorse trying to seduce him while he does his best to tease her with his insistent stares and refraining actions. But what he really wants (if he wants anything at all) is to keep himself faithful, while James wants to know their love hasn’t been soiled. Caroline, nonetheless, craves for some phallic attention from whoever’s willing to show it to her — naturally, the one with whom she has the harder time getting along is the one who has his sexuality tried.

And quite a trial this is — for the viewer. An equilateral triangle of tears and laughter or your third installment of a soap-opera you weren’t planning to see. I know I wasn’t. Before the first act concluded (by the third or fourth time that James re-exclaims how “beautiful” the place is . . . without anything else to say), I knew there was nothing else to see. I had my verdict ready before the trial started. It’s thus unnecessary to confess how much I wished I were Wonderland’s Queen of Hearts — that heartless monarch — and could have had the guts to pass the verdict first and then the trial. But my sense of integrity prevented me from doing so. Since I knew I was going to review this film, I refused to jump into any conclusion before I finished to see the movie from back to end. And till the end I went, and wasted my time till the first credit rolled by. My verdict didn’t change at all. Only my mood did. I wanted to give Wasp the benefit of the doubt and it slapped me with the certitude of its truth.

Amidst the many problems that this movie has, the most noticeable perhaps is that its tone is all around the pitch without being anywhere proper. To tone-deafness we can add pitch-loss. It’s not that Wasp is nothing; it’s worse: It is about nothing — yet it wants to be about so many things at once. Is this not the dictionary definition of hollowness?

Nothingness, I should repeat, is perfectly okay as an ambition in a work of art, and just as much as an existential goal. It’s not a goal I share, but that doesn’t mean I cannot see its value. Hollowness, on the other hand, is not nothingness; it’s just its cloak, the main aim of which is to mask what cannot be sought. It is a devious garment that makes out themes as though it were devising garnishes. Hollowness is but a vanity accessory to a very insecure set of nothingness.

Here’s the difference between being about something and being something, between thematizing and being the theme one purports to talk about: The thesaurus recipe for pretentiousness. This difference is of the same nature than the difference between tackling some flaw and having the flaw that’s tackled, which, in this case, is nothing but talked and collectively rationalized. Philippe Audi-Dor’s first feature sins with being the flaw it purportedly comments on. Wasp wants to tackle conceitedness as the first motivation for feeling and provoking jealousy, but the result is nothing but a conceited piece of waste: A pompous piece of color trapped within a soapy bubble — ever ready to burst . . . never doing so as it is continuously poked with the dull end of a sting, a stick; oh, it all stinks in the end. That’s it. Nothing much to say.

Audi-Dor’s dexterity with the camera becomes a weary resource as it expresses nothing in particular and is subjected to sudden bursts of self-indulgence rather than to a consistent narrative playground. The actors are animated pinups that looked as though they had recently escaped a perfume-affiche. The dialogues are unimaginative to the point of awkwardness and pointless to the extent of embarrassment. The storyline, an ill-fated slice-of-life drama, results in a dramatic sliced life that leaves us feeling sorry for the dismembered genre. And the metaphors! The lazy use of metaphors, starting, of course, with the one that gives the movie its title, its prologue and epilogue. Pointing a camera to an object (or an insect, in this case) is not enough to create a metaphor — let alone to make it gel. Rare are those metaphors that work while they belong to separate realms in the movie, as asides that create a digression, a diversion for the viewer while following a story. In the case of Wasp, these asides are common-all-too-common, for the vehicle contributes nothing to the life of the tenor. Jealousy, as the core (what core?), and the tenor of the main vehicle, the lonesome wasp, can be heard clear and loud, but not so much as a metaphor but rather as the pre-tension on which it cleaves. If there is a wasp in this movie, it is the characters: They couldn’t be any WASPER.

Watching Wasp is like stepping over a hollow sting. It leaves nothing, not even its toxin. But it does bother to the bone. If fleetingly. The movie, in this sense, is about 70 minutes too long and three actors and a filmmaker short. The wasp at the prologue and epilogue is quite good though. It left me wondering what if it had stung my eyes before the movie started. What a great alibi to a stubborn sense of integrity. 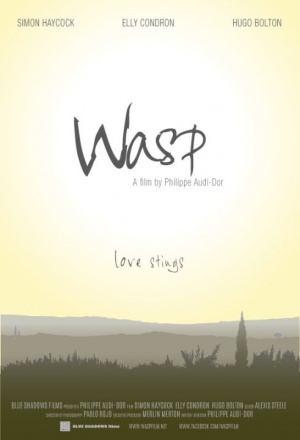