Heartstrings are tugged quite relentlessly in Lee Whittaker’s hyperbolically dark and dingy drama Catching Fireflies, but perhaps to touching effect. Whittaker has some very slick tools in his filmmaking arsenal and so he successfully crams a lot of style and technically ambitious tricks into the compact 19 minute running time, while convincingly depicting the hellishly hopeless conditions of homelessness in L.A.

The subject matter is gruesome and grim, almost to the point of garishness given how committed Whittaker is to including anything and everything that such tales of poverty and drug addiction generally suggest. The events cover a single day in the life of little Isabella (Gianna Gomez, “Pop Star”) and range from her nearly drowning to her mother Sofia (Carlotta Elektra Bosch, “The Amateur”) shooting up and running afoul of some nasty Latino gangster types who look and sound like every Latino gangster type ever found in L.A.-based crime pics.

Originality, however, isn’t exactly Whittaker’s focus here. The pieces on display here are nearly all cribbed from past pictures, but there’s still something to be said for doing the familiar well. Gomez in particular is what really saves the movie, since Isabella survives the ins and outs of her miserable existence by letting her imagination roam free. This gives Gomez room to explore a range of emotions and her sweet smile and soulful eyes are clearly Whittaker’s best chance at getting the viewer to connect with the material.

Quality editing, production design, and makeup all convincingly contribute to the creation of the two worlds, so Whittaker is able to attend to both in meaningful ways. He soaks in the details of Isabella’s imagination, which often involves some gentle interpretation of the titular insects, and then suddenly rips us out of the fantasy and rubs our faces in the filth of the crime-ridden streets. It’s a harsh transition, but handled smoothly enough to mimic the viewpoint of a child who continues to seek out a silver lining on the dark cloud that hangs over her.

It’s the combination of reality and fantasy as deeply defined in a short running time that best showcases Whittaker’s skills and it’s Gomez’s performance that prevents Catching Fireflies from slipping too flashily into schmaltz. The script still has its flaws, especially in a rushed third act that pushes too hard for big drama when something somewhat subtler would have sufficed. But this is a fine example of a director recognizing his strengths and the talents of his collaborators and putting it all together to craft something memorable, if a little recycled in its approach. There’s no need for the heartstrings to be tugged so blatantly, but Gomez helps ease the strain. She’s the best catch of all. 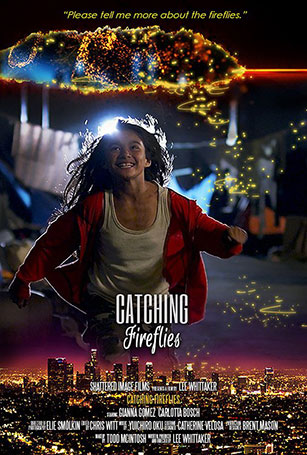