Un Certain Regard prize winner at the Cannes Film Festival, Rams (Hrútar) is a comedy/drama where communication is a luxury until it becomes a matter of survival. Directed by Grímur Hákonarson (“Summerland”) and set in a remote village in Iceland, it is the story of two unmarried brothers, Gummi (Sigurður Sigurjónsson, “Brave Men’s Blood”) and Kiddi (Theodór Júlíusson, “Volcano”), both heavily bearded sheep farmers who live one hundred yards from each other but have not talked in forty years. They are part of a country where according to Hákonarson, there are 200,000 people and 800,000 sheep.

When the elder brother Kiddi takes first prize in a competition for the most highly-prized ram and Gummi comes in second, Kiddi lauds it over him, getting drunk and shooting holes in his brother’s window. The victory turns out to be pyrrhic, however, as it is soon confirmed that the winning ram has a life threatening disease known as “scrapie,” an illness that attacks the sheep’s brain and spinal cord and is highly contagious and incurable. The result is devastating. The shepherds in the village find out that they must slaughter their entire herds, a blow that hurts deeply, both economically and emotionally.

Very attached to his flock, Gummi refuses to let the authorities kill his sheep, insisting on doing it himself, yet, without thinking things through, he decides to hide a few of his prized sheep in the basement, a risk that brings danger. Kiddi also does not handle it well. When he learns that there will be a prohibition against sheep farming for two years and there is a possibility that even after that, the disease may return, he begins to drink heavily and once has to be rescued from the snow with a tractor’s front loader and taken to a hospital.

Rams has some notable comic moments. For example, Gummi is always being interrupted while sitting naked in his bathtub trimming his toenails. There is also an adorable sheep dog that carries notes between the brothers as a means of avoiding actual conversation. Like a swift current, however, the film moves from being an eccentric comedy to that of a life or death drama. When Gummi’s hidden sheep are discovered, the brothers must come together. Their choices are not easy, nor are they without risk to their own safety as the two prideful men must put aside their own egos and take extraordinary measures to save the remaining sheep. Breaking their 40-year-silence, one brother says to the other, “No sheep — just the two of us.”

Rams is a small film without big pretensions, but succeeds in capturing the spirit of a deeply rooted culture now threatened with extinction and two brothers who may be separated by their intransigence but whose longing for connection is as strong as ever. With the help of a haunting score by Atli Örvarsson (“Hansel & Gretel: Witch Hunters”) and the striking photography of Sturla Brandth Grøvlen (“Victoria”), Rams paints a picture of remoteness and solitude, but it is one with warmth at its center. 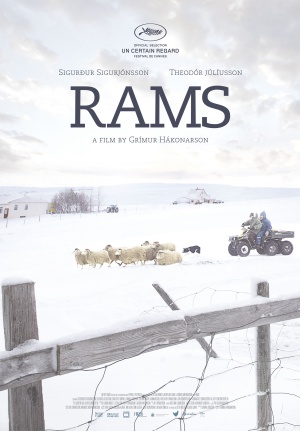