“My mother died when I was seven years old — car accident. I saw it two months before it happened.” — Jimmy, “Volition”

One of his associates, Ray (John Cassini, “A Dog’s Way Home”), is in possession of a bag of hard-to-shift Zimbabwean blood diamonds. “I need you to do that thing you do in that head of yours. I need you to find safe passage for these.” He hires Jimmy and his prophetic condition to find a buyer, but when two goons in Ray’s employ try to double-cross the deal, a sequence of seemingly inevitable dominoes start to tumble that cause Jimmy to see an undesirable fate — namely, his own death. With the assistance of new lover Angela (Magda Apanowicz, “The Green Inferno”) along with estranged foster father and “fruit loop scientist” Elliot (Bill Marchant, “Chappie”), Jimmy discovers the origin of his abilities and must use them to change his fate.

Unfortunately, fresh takes on time-travel are rare events. 2014’s “Predestination” fixed the grandfather-paradox at its center, whilst Alex Garland’s recent miniseries “Devs” looked to unpack the phenomenon with Big Data. Volition seems acutely aware its genre’s history. There are echoes of the metaphysical determinism in “12 Monkeys,” the mob-fusion of “Looper,” and an attempt at the DIY engineering of “Primer.” However, the narrative trickery of temporal displacement has been done ad nauseam, even being deployed — and with greater execution — in “Harry Potter and the Prisoner of Azkaban.” Much like Jimmy, we’ve seen all these tropes play out before. More problematically, the time-travel mechanism in Volition is just as blasé as Domhnall Gleeson’s eye-squinting in “About Time,” with such shaky science feeling more at home in the Richard Curtis rom-com.

Credit can be given to the grungy real-world environment that smacks like a calloused backhand, with all actors lending strong performances to create an atmosphere of economic depression. Jimmy serves as a competent and likable hero, staggering onwards through all his tribulations with a bottle of whiskey and an admirable alignment towards chaotic-good.

But while Volition looks great for a low-budget science-fiction thriller, skewed visual sequences are overused — the cinematic tricks becoming tiresome after too many repetitions. In much the same way, the re-treading of old story paths become similarly boring, precisely because we’ve already seen the events play out. Watching a stale sequence multiple times from different angles does not make us lean in for more, but instead lean back.

Although the story doesn’t quite hold together, our circular trip through Jimmy’s life does enough to keep us in our seats. At 91 minutes, the shuttling pace of Volition is ultimately worth the ride, but only the once. Unlike its hero, looping reruns aren’t in its destiny. 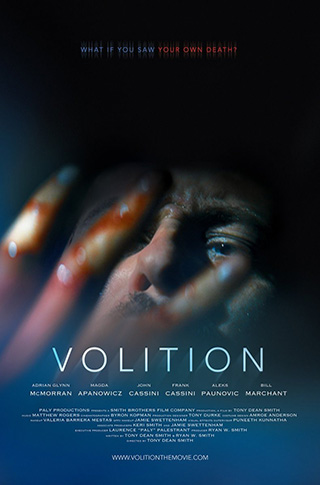