If Charlie Steeds’ The Barge People had been released in the 1980s or 1990s, it would have been released by Full Moon or Troma. That’s certainly no slight on those two companies, but rather a nod to two true-blue schlock producers of recent times. The plot is uncomplicated, the performances not overly nuanced, and the production values acceptably low. It ain’t meant to be Shakespeare, folks. It ain’t even meant to be Danielle Steele. With The Barge People, what you see is what you get, which is an essential hallmark of a guilty pleasure movie.

Four young people (two sisters and their respective boyfriends) embark on a weekend tour on a whimsical barge down a quiet British canal. The group includes Kat (Kate Davies-Speak, “Invasion Planet Earth”) and Mark (Mark McKirdy, “Electric Man”), who have been with each other for some time, and Sophie (Natalie Martins, “Poltergeist Activity”) and Ben (Matt Swales), who have not. Sisters Kat and Sophie are getting together for the first time since their mother passed and are looking forward to reminiscing and relaxing together. Meanwhile, Mark and Ben go like oil and water, the former glad to be outdoors and the latter glumly glued to his phone. Among the quartet, only Mark knows how to operate the barge, but if you thought that this little trivia nugget would mean something later in the film, you’d be disappointed.

With the character dynamics set up, our gang launches the rented barge down the canal. As expected, Ben is a reluctant vacationer and seems to view the entire experience in disdain. He shrugs off any requests to assist Mark in piloting the barge downriver — he has to take this call! He’s in line for a promotion! — which naturally leads to some tension between the two. Meanwhile, Sophie and Kat are enjoying the time together as best as they can.

The trouble starts when Ben finally does lend a hand with maneuvering the barge, talking over Mark’s instructions that the controls are counter-intuitive (you turn left to go right, and vice versa), which leads to the barge bumping into a parked floater (causing some minor damage) inhabited by somewhat-trashy couple Jade (Makenna Guyler, “King of Crime”) and Ricky (Kane Surry, “Modern Love”), who are none to pleased. After the ship is righted, the group continues down the canal a bit further before stopping for the evening and heading to a secluded pub. That they run into Jade and Ricky at the pub should not come as a surprise to anyone. Nor should it come as a surprise that after leaving the pub (under the watchful eye of the proprietor, Rosemary (Emma Spurgin Hussey, “An English Haunting”), Jade and Ricky show up at the barge as well and attack the quartet of interlopers in a classic example of city folk versus country folk.

You’re probably wondering where the titular Barge People through all of this. Although a prologue and some side scenes have let the audience know that Something Is Wrong, we don’t see any of these “people” until the film is about two-thirds finished, which is no mean feat since the movie is under 80 minutes to begin with. But when the Barge People do make their much-awaited first appearance, it is on! The makeup and costumes for these mutant creatures (their origin is alluded to by two side characters early in the movie) looks terrific, if not realistically terrifying. Imagine a close cousin to Toxie from “The Toxic Avenger” series and you have your Barge People. These are nasty creatures, yes, but they have a certain directness that I came to appreciate during our short time together; they tell the gang (yes, tell) their motive, their raison d’killing, if you will. By the time you glean this info, it won’t matter too much. Their motive is as generic as the human characters are shallow.

About the only thing that The Barge People has going for it, other than its pretty locale and pretty people, is the mutants themselves. Sadly, as mentioned, they show up a little too late to save the film from itself. This feels like it was made on a budget even lower than the lowliest of Troma films and as a result feels like a knock off of the same. 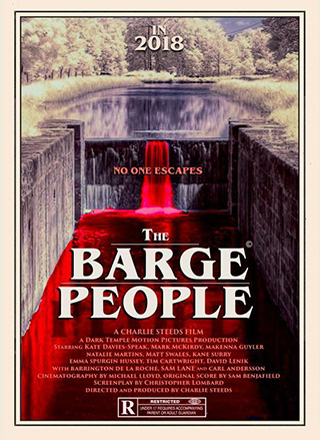