The great outdoors can be a dangerous place, especially if you’re an idiot. That seems to be the prevailing message loudly stomping around the surface of Adam MacDonald’s man-vs-nature thriller Backcountry. It’s the kind of jangly fright flick that appears to be about bad things happening to good people, but actually turns out to be about how your chances of surviving a camping trip deep in an Ontario forest dramatically decrease when you flippantly do things like refuse to bring a map along and stick your head so far up your own ass that you don’t realize you’re lost until multiple days have passed since you actually got lost.

So in a sense, the movie has a good point. Doing stupid things in the woods yields stupid consequences. That’s all pretty fair, though it’s certainly an odd strategy for a scary movie that could have just as easily placed its protagonists in harm’s way without so much stupidity stoking the fire. MacDonald’s approach practically dares us to stop caring about camping enthusiast and generally cocksure moron Alex (Jeff Roop, “Final Draft”), as if the bland character was ever making much of an engaging impression. Roop’s performance ensures that Alex has more in common with the trees that surround him than the other flesh and blood beings wandering around in the woods.

Giving us a laundry list of reasons to quit caring when caring was difficult enough during the “hey, maybe this guy knows what he’s doing!” phase of the movie is as bad an idea as any that Alex concocts on the trip. Casting Roop to inhabit the soulless vacancy of the character is a pretty epic strike two. At least there’s Alex’s girlfriend Jenn (Missy Peregrym, “Stick It”), whose antsy-ness regarding the woods and its many mysteries continually proves she’s the smarter half of this couple. Peregrym’s performance isn’t all that strong in the end, but she certainly looks more natural and convincing than Roop.

The pair needs to work together to generate that all-important chemistry, though, and this proves a task as equally difficult as surviving their camping trip. Everything about Alex and Jenn suggests they’ve been unpacked from some build-a-couple box complete with instructions from a screenwriting course. Sweater-modelling mannequins standing side-by-side in a department store have more chemistry than these two.

So when MacDonald tries to wring some emotion from the situation, either through a breakup-threatening argument or a sudden reconciliation, it all feels supremely strained to the point of becoming laughable. If your movie has only four characters in it (let’s count a cameo-ing Nicholas Campbell and an Irish accent-sporting Eric Balfour, to be fair) and the prevailing urge during moments of life-or-death struggle for the main two is to chuckle, it seems the mark has been clearly missed.

That doesn’t stop MacDonald from trying to keep making his point that woefully unprepared hikers are setting themselves up to be bear chow. The director does have a few good ideas about how to utilize the bear and works to keep the sightings and encounters anchored mainly to Alex and Jenn’s perspective, rightfully putting us in their shoes. The low budget of Backcountry means that an actual bear has to be used at times, too, and in a movie of such fake humans, this ursine authenticity is a nice touch.

The big moments of suspense rely on tight angles and a rowdy sound mix, which is a smart approach as well, but the actual execution is off. MacDonald is too quick to cut and too clumsily exaggerated with the sights and sounds to really capture the horror of the situation. At least some impressive work by the makeup department helps MacDonald still make an impression.

It’s just not enough to counteract all the badness oozing from the actors and the script, though. MacDonald employs so much ridiculous foreshadowing that the intended surprises struggle to gain any traction. We’re constantly being winked at, yet Backcountry is almost entirely without humor (well, the intentional kind, at least). It’s an amateurish mix, a dramatic thriller too silly to take seriously, but too serious to admit it’s silly.

That silliness extends everywhere, too. The camera follows Alex and Jenn around like a nosy tag-along hiker that’s been drinking the whole trip. Our inebriated eye is a bit of a mess right from the start, so one can probably imagine how sloshed the camera is once things turn scary after several days locked in the forest with these sad-sack people. Get ready for lots of shaky-cam where our vision is further obscured by the nearly constant and rather obnoxious use of out-of-focus shots, taking MacDonald’s woeful attempts to establish a sense of disorientation to some lazy lows.

So yeah, a forest with a bloodthirsty bear can be a rough place to wander around without a clue. But if you remember a map, are honest with your hiking partner, don’t ignore the bear tracks you clearly just spotted, and actually know where you’re going, you might just be okay. Probably don’t go camping with people like Alex, either, if such a thing can be avoided. Then again, what do I know? In MacDonald’s world of the ever-dangerous woods, I’m just a drunk camera. 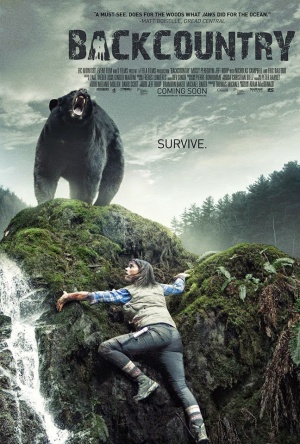