I suppose the title, “The Christmas Pageant That Almost Never Was” would have worked, but Believe is fine. After all, it’s the holiday season, so we’re entitled to a little suspension of (dis)belief, as the newest faith-heavy film from writer/director Billy Dickson in his major debut, conveys. Drawing allusions to Frank Capra’s 1946 classic, “It’s a Wonderful Life” is inescapable, right down to an angelic character named “Clarence” and a man finding himself at the end of his rope. This is not always a favorable comparison, however. I mean if such a picture already exists, why bother to see it’s lightweight distant cousin. Still, Dickson gives Believe his best effort and the story and acting contain enough of a sincere streak to make this a slight diversion before another “Star Wars” release and the multitude of award-worthy features due out soon.

This plot, like a lot of true stories of the last decade, concerns Matthew Peyton (Ryan O’Quinn, “Easy Money” TV series), the owner of Peyton Automotive Works, a dying business in a dying Virginia community. Matthew is no Scrooge, but because his business is no longer viable (could there be a nefarious reason for this?), he is forced to make personnel and salary cutbacks, angering the local union bigwigs as wells as ordinary workers. Never mind all of that, his biggest crime, however, is the cancellation of the town’s annual Christmas celebration (I suppose no one thought of just making it a family event, but Dickson never consulted me on the script . . .).

Badgered by city leaders like Chesley Sullenberger was by the National Transportation and Safety Board in an earlier production (“Sully”), Matthew wants to keep the festival that his grandfather started, but what’s the use? Actually, it’s in the town’s by-laws that the celebration take place, Merry Christmas everyone!

It’s a sad fact that if a business is losing money, it either closes, cuts costs, begins to seek another product line or relocates to an area where overhead costs are cheaper in order to continue to make a profit (ask Barack Obama or Donald Trump about that last option). In his effort to save jobs, Matthew toys with slicing some salaries, but that causes the union to call for a strike. Later, these representatives vandalize his property and even send some thugs to beat him to a pulp. “Norma Rae” this ain’t, folks. In fact, unions haven’t been given this much of a black eye since the days of Jimmy Hoffa or Ronald Reagan vs. the air traffic controllers.

Left for dead on the other side of the tracks, Matthew is cared for and nursed back to health by latter-day Bagger Vance in little Clarence (Issac Ryan Brown, “Batman v Superman: Dawn of Justice”) and his beguiling single mother, Sharon (Danielle Nicolet, “Central Intelligence”). As the beneficiary of this kindness, Matthew’s heart grows three sizes, well maybe not exactly, but he does begin to see the light (not that he was totally blind to begin with, but you know, he has to grow a little bit . . .). Little Clarence, meanwhile is a character so imbued with a spirit of unbridled positivity, sometimes you just to reach out and knock him down a peg or two. It’s this trait, though, that persuades Matthew to open his factory to the cold and homeless (despite a not-so-subtle villain who claims this violates some kind of regulation or another), among his other efforts to pay it forward, or backward, or whatever . . .

There is no doubt Believe is for those of the Christian conservative persuasion. There’s certainly no crime in this, just as there is no problem with Michael Moore pontificating for left-wing causes. It’s the writing, directing and acting (O’Quinn and Brown are best) that will stay with most audiences. And while the message is that faith is the key (except faith in union representation, I suppose) here, and, no matter obstacles one is up against — especially in Hollywood at this time of year — things usually work out. 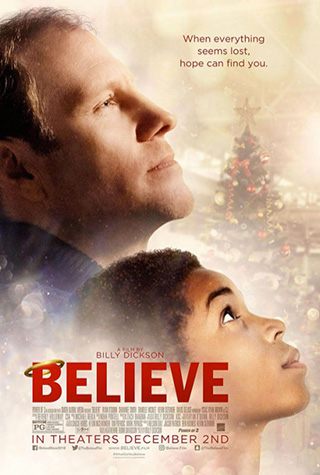