“It’s been a while since New York had news this good — especially with an airplane in it.”

What if your instincts indicated you were correct, but training, technology and computer evidence proved you were wrong? How would you deal with it?

Those are the questions in the newest Clint Eastwood-directed film, Sully, the biopic of airline pilot Capt. Chelsey “Sully” Sullenberger, who saved the lives of himself and 154 passengers of US Air Flight 1549 after a bird strike disabled both engines on Jan. 15, 2009. The decorated pilot chose to land in the frigid Hudson River rather than risk trying to fly the wounded plane to an airport, and he was treated as a genuine hero for his fast thinking — that is until the meddling National Transportation and Safety Board (NTSB) began their investigation.

The facts are all there. I mean, it isn’t easy to forget what happened just seven years ago in New York City with a story that was all over the news cycle for weeks. Sullenberger, quiet, reserved and a truly talented pilot (and played by Oscar-winning everyman and even more dignified, Tom Hanks, “Philadelphia,” “Forrest Gump,”), is forced to undergo scrutiny from the surly panel of experts that includes Charles Porter (Mike O’Malley, “Concussion”). Through charts, graphs, mathematical calculations and even computer simulated testing, the group evidently believes Sullenberger could have easily returned to LaGuardia Airport, or even landed safely in New Jersey after ingesting a large flock of birds into the two wing-mounted engines. And, for a while, the shaken captain cannot combat these daunting statistics and mounting evidence that — perhaps — he did do the wrong thing.

The actual events are meticulously shown several times, from the pilots perspectives, from that of the passengers, the air traffic controllers and even in a horrifying dream which shows what might have happened if the captain took a different course of action. These scenes take up most of the rather short 1 hour, 40-minute running time of Sully. Other sequences include Sully and First Officer Jeff Skiles (Aaron Eckhart, “London Has Fallen”) and Sully interacting by phone with wife, Lorraine (Laura Linney, “Mr. Holmes”). There is also the hearing sequences as well as a bar scene where the tender and customers recognize Sully and serve him a drink named after him (vodka and a splash of water).

Also, look for a couple of flashbacks showing Sully’s introductory flight aboard a crop-dusting biplane and a stint as an Air Force pilot.

These scenes are short and to the point, but this isn’t meant as a criticism, just Eastwood putting together a simple film about a simple man caught in a situation well within his control — that is until AFTER the safe landing and rescue. Then his quiet world is shaken to its core and he is faced with adulation, media scrutiny and awkward appearances on talks shows such as David Letterman and the like.

Here, even though much of the drama of those NTSB conferences was given full dramatic license, Hanks and Eckhart are struggling to prove that the dangerous Hudson landing was the only choice they had at the time, despite a pile of proof that they could have just as safely touched down on land. Hanks especially captures the real Sullenberger’s disdain of the spotlight (“I do not consider myself a hero. I was just a man doing his job.”).

According to the film (which reflects much of the actual facts, we presume), after landing the plane, he and the crew make sure everyone is out of the craft first even as it begins to sink in the icy January waters (fortunately, several Coast Guard boats and NYPD copters were quickly on the scene).

He shuns the white hot media attention and does his best to show that the pilots in the simulators had information and knowledge he and Skiles were not privy to when the birds smashed into the craft (a similar strike at Logan International Airport in Boston took down an Electra, Eastern Airline Flight 375, in October 1960, killing 62 of the 72 aboard). Having lost Academy Award nominations for his last two biographical efforts (“Captain Phillips” and “Bridge of Spies”), I would not be surprised if Hanks garnered some kind of recognition for his role here; whether Oscar or Golden Globe.

Despite questions of whether the hearings were as accurate as in real life, the taut, tight script (Todd Komarnicki, “Perfect Stranger,” from Sullenberger’s own book, “Highest Duty: My Search for What Really Matters”), restrained acting and sucked-clean direction will have most viewers emotionally involved from the opening to the closing credits. Sully is easily one of the best films of 2016 so far, and one which should still be talked about at awards time. 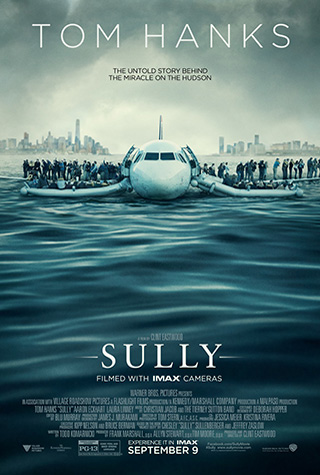